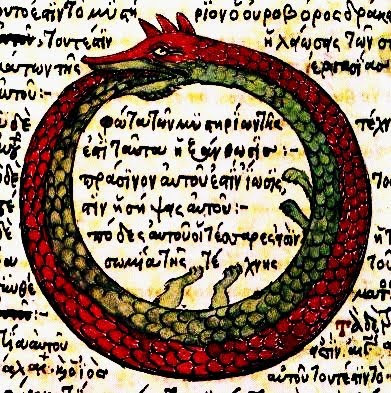 There's an interesting idea that the zodiac sign of Pisces with its two fish chasing each other, head-to -tail, is a variant upon the Ouroboros symbol.

'that the first day should make the last, that the Tail of the Snake should return into its Mouth precisely at that time, and they should wind up upon the day of their Nativity, is indeed a remarkable Coincidence, which tho' Astrology hath taken witty pains to salve, yet hath it been very wary in making Predictions of it'.

There's two points worth noting here; the first is that Browne likens the circular cycle of the year to the Ouroboros; secondly, whether consciously or unconsciously, he was in fact predicting the date of his own death, inasmuch as he died upon his birthday, the first day making the last.

C.G. Jung notes -'In the age-old image of the ouroboros  lies the thought of devouring oneself and turning oneself into a circulatory process, for it was clear to the more astute alchemists that the prima materia of the art was man himself. The prima materia is a dramatic symbol for the integration and assimilation of the opposite, i.e. of the shadow. This 'feed-back' process is at the same time a symbol of immortality, since it is said of the Ouroboros that he slays himself and brings himself to life, fertilizes himself and gives birth to himself. He symbolizes the One, who proceeds from the clash of the opposites, and he therefore constitutes the secret of the prima materia which, as in a projection, unquestionably stems from man's unconscious'.
- C.G. Jung CW 14:513