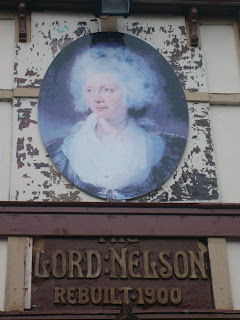 Around 100 metres from home there’s a disused   public-house with an intriguing facade. Though little mentioned in history books,  it looks as if  Norfolk’s nautical hero, Lord Nelson, perhaps in an attempt to update his image for the 20th century,  indulged in cross-dressing to ‘rebuild’  his gender no less!

That is a bit surreal. But then, Nelson did have an interesting personal life.

Could it be meant for Fanny or Emma? Or even his mother, since he was from Norwich?