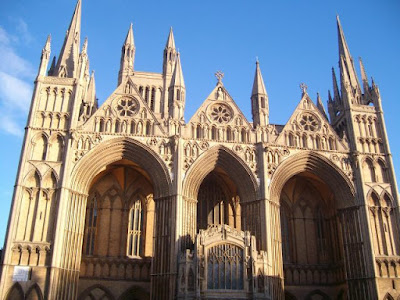 Back in Fenland ! Once more travelling through the flat as a billiard-table landscape criss-crossed with drainage dykes, to visit Peterborough and its cathedral. East Anglia has several notable medieval cathedrals including the 'Ship of the Fens' of Ely, the lofty spire of Norwich cathedral and the unusual and dramatic architecture of Peterborough cathedral.

Peterborough cathedral is described as an example of Early  English Gothic in style and is one of the most important 12th century buildings remaining intact in England. The three enormous and visually imposing arches of its western facade are apparently without architectural precedent and also without future reference in the history of architecture. 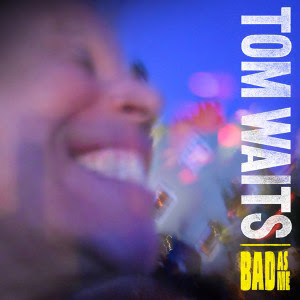 The album of  2011? It just has to be Tom Waits Bad as Me (released October 21st). As the Rolling Stone review says, the timing of the release of Waits' new album is impeccable.

TomWaits (born Los Angeles, U.S.A. December 7th 1949) Happy Birthday Tom ! has for decades enacted persona from the underbelly of the American Dream, the dispossessed, down-and-outs, hard drinkers, lonesome drifters and out-of-luck gamblers in the era of the Great Depression, such characters surviving  in dire straits come sharply alive now in the New Depression.

Waits and his extraordinary voice has become a true American phenomenon and a world-wide star; utterly archetypal in his persona, his voice croons, bellows, growls, barks and snarls with characters walking straight out of the pages of a Damon Runyan short story with more than a nod to American literary giants such as William Burroughs, Charles Bukowski and Jack Kerouac. The present state of Waits' voice is show-cased in  Glitter and Doom (2009) recorded live at various venues on tour. A showman in the true sense of the word, Waits has also developed his acting career in several film roles, most recently as the sinister Mr. Nick in Terry Gilliam's metaphysical fantasy, The Imaginarium of Dr. Parnassus (2009).

Bad as Me is Tom Waits' 17th  album no less, since his debut recording in 1973. Although essentially rooted in R ‘n’B music, Waits shifts from genre to genre with ease  – from Cuban Salsa to Metal, from Beat poet Jazz monologues to Weimar Republic-style Cabaret, from Vaudeville to Gospel and Blues. His song-writing is a compendium of American music.  I can't think of any other singer/song-writer who has recorded in such a wide spectrum of genres or another singer capable of comparable vocal gymnastics (his vocal range encompasses 7 octaves) with perhaps the exception of the East German opera-trained, one time Punk rocker, Nina Hagen. And indeed Waits performs a Nina Hagen-style number in German on Alice (2002) entitled Kommienienzuspadt.