Back in Fenland ! Once more travelling through the flat as a billiard-table landscape criss-crossed with drainage dykes, to visit Peterborough and its cathedral. East Anglia has several notable medieval cathedrals including the 'Ship of the Fens' of Ely, the lofty spire of Norwich cathedral and the unusual and dramatic architecture of Peterborough cathedral.

Peterborough cathedral is described as an example of Early  English Gothic in style and is one of the most important 12th century buildings remaining intact in England. The three enormous and visually imposing arches of its western facade are apparently without architectural precedent and also without future reference in the history of architecture.


The day I visited Peterborough to view its cathedral was not-so lucky. A highly conscientious security official took one look at me and immediately debarred my admittance to the cathedral, stating a private engagement was about to occur and to come back at 4 p.m. So I had to content myself with being able to hear a jolly carol service sung by a voluminous-sounding choir accompanied by organ, while walking round the cathedral grounds, quite literally left out in the cold.

On the main pedestrian high street I heard an extraordinary number of languages spoken. According to Wikipedia in addition to having a high percentage of Polish immigrants, Peterborough is also home to one of the largest Italian communities in the UK. There have however been rising tension and violent incidents in recent years between differing racial and ethnic communities in the Cathedral City due to its rapid population growth. 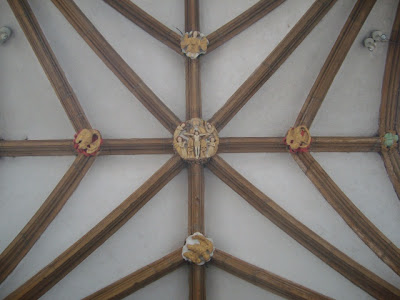 Outside the Cathedral grounds there's the medieval church of Saint John the Baptist. I was quite excited to discover an example of a tetramorph carved upon its porch roof. The tetramorph is a religious symbol which frequently occurs in medieval churches and represents the four evangelists of the Gospels. Of particular interest  is the curious fact that the tetramorph is also synonymous with the 'fixed cross' of the astrological zodiac. The figures of a lion, an eagle, an angel and a bull with Christ at the centre are unfortunately not-so easy to make out distinctly in this photo unless magnified considerably.

The best  way to photograph this Tetramorph  I decided was to lay down flat on the floor. Almost immediately a woman dashed up and asked whether I needed the kiss of life. I politely declined her offer while another lady pointed out that my wallet  had dropped out of my pocket when getting up in haste. Such were the few memorable moments of my swift visit to the city of Peterborough.

Oh my, Kevin! It sounds like you had quite a time in Peterborough; being mistaken for dead, nearly loosing your wallet and being refused admittance to the cathedral-- very ill fated indeed!

However, that is an interesting find in the tetramorph. I like how it is worked into the lattice, very ingenious design.

Shame you didn't get inside, but the exterior is very impressive all the same. I really like the English Gothic style, even if it isn't as flamboyant as the French. I enjoyed your blog post about it, too.

My 3rd try to leave a comment, but just as well: the fen town of Peterborough that I visited in 1960 was less than half the size of the present city and not in the least cosmopolitan. To save it, they had to make it a New Town. But the Cathedral was already its lovely self. It has a WOODEN ceiling, original though repainted, and I think that those later ribs in the choir are wood (not the only wooden ribs in English Gothic, but they are rare) unless they are of Peterborough brick. The nave, though not huge, is nobel Norman Romanesque. I loved it. Yes, the Early English west front is very nice, and yes, Ely is much greater, but Peterborough is unduly neglected in the handbooks. I do hope you get back to see it for yourself! I assume you know Mildenhall Church with its lovely angel roof. As for the fens, Dorothy Sayer's evocation of them in The Nine Tailors remains very good indeed. I love East Anglia.

wasn't peterborough where gordon brown had his unfortunate encounter with the "bigoted woman"?