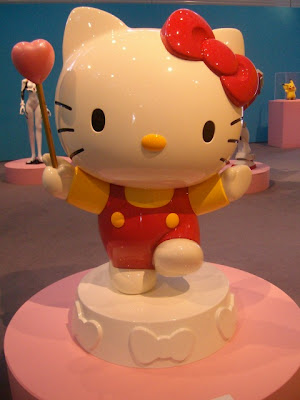 Recently I had the pleasure of visiting the Sainsbury Centre at the University of East Anglia (UEA) for an exhibition organized by the Japanese Foundation entitled Japan : Kingdom of Characters. On an all-too-rare day of settled summer weather it was well worth the short cycle-ride from home to view.

The informative guidebook to the  exhibition explains that Japanese people have established strong ties with manga and anime characters; in effect, such characters have forged a powerful bond with the Japanese psyche, sometimes as a replacement for family and friends. In essence, many of the rich and imaginative characters of Japanese manga and anime have developed as compensation and comfort against the stresses and alienation of life in megapolis cities. And for these reasons it's not always easy for Westerners to appreciate manga and anime's enormous popularity in . A sizeable percentage of  was profoundly psychologically dislocated as a result of the rapid  growth, industrialization and urbanization which Japanese population underwent in the twentieth century. In some ways manga and anime characters have also provided comfort for the solitary and lonely as well as the survivors of the many disasters has experienced throughout its history. From the atomic bombs of Hiroshima and Nagasaki in 1945 to the cataclysmic natural disasters of the Kobe earthquake of 1995 to the simultaneous disasters of earthquake, Tsunami, nuclear power-plant meltdown and subsequent radio-active fears of 2011, Japan has always been vulnerable, not only to ecological disasters but also to man-made catastrophes.

From the early 1950’s manga characters such as Tetuswan Atom (Astro Boy), Japanese anime has debated on humanity’s relationship to science, on the differences between robots and humans, the future of humanity in sci-fi worlds, often of a post-apocalyptic nature and the moral issues of living in a technologically sophisticated, yet alienating megapolis. Alongside an advanced technological and scientific perspective, the remnants of superstition and a fascination with the spirit world in the popular psyche often feature in Japanese anime. Typically, the ghost in the machine in Japanese anime speaks with the voice of a long-lost ancestral spirit.

There’s a considerable amount of mass-produced merchandise associated with Japanese anime; the Kingdom of Characters exhibition even re-creates a teenage girl’s bedroom crowded with the paraphernalia of her favourite anime characters, some of whom have achieved global popularity. The Tamagotchi ‘egg-watch’ digital electronic pet has now sold in excess of 76 million since 1996, while the characters of Pokemon and Hello Kitty (photo above) are instantly recognized and loved by many throughout the world.

Puzzlingly to western sensibilities Maeda's controversial Urotsukidōji mixes plots and genres seemingly unrelated to each other - horror, comedy, disaster, the supernatural and teen-age romance are all juxtaposed in random sequence. This effect is heightened further by the severe editing which Maedea’s flawed masterpiece has suffered at the hands of the British Board of Censors. Besides indulging in extreme eroticism and violence Urotsukidōji depicts an alternate world in which  the battle of good and evil is fought on a cosmic scale between mankind, beasts and demons. Urotsukidōji also includes an example of so-called tentacle erotica. The origins of tentacle erotica can be traced to an illustration by Japanese artist Katsushika Hokusai's (1760-1849) The Dream of the Fisherman's Wife an influential example of Shunga (Japanese erotic art). The subject of tentacle eroticism has been explored by a number of artists, but perhaps none with such notoriety as Toshio Maedea’s interpretation. Maedea returned to tentacle eroticism in his equally infamous horror/sex comedy series La Blue Girl (1992-94).

Japanese anime has also been used a vehicle to discuss romance, sexuality and spirituality. In Takahashi Rumiki’s romantic-comedy Urusei Yatsura (1978-87) the bikini-clad Lum possesses the fatal combination of a bad temper in conjunction with magical powers as elements of her adolescent love-life. The relationship between sexuality and magic is never far from the surface in Rumiki’s dark fantasy Mermaid Forest (1991) which develops an ancient Japanese legend, that mermaid's flesh grants immortality if eaten. However, there's also the risk that eating it may also lead to death or transformation into a lost soul or damned creature.

Other notable landmarks in the history Japanese anime include Masamune Shirow’s  Ghost in the Shell (1995) in which a cyborg heroine with human consciousness questions her own identity - Perfect Blue (1997) a Hitchcock-like psycho-thriller and Hiroyuki Kitakabo’s Blood: The Last Vampire (2000) which sets the vampire myth on an American occupation air-base. Each of the aforementioned has in one way or another advanced the art of Japanese anima in either genre and story-telling and/or computer-generated graphic design.
Read more »
3 comments: 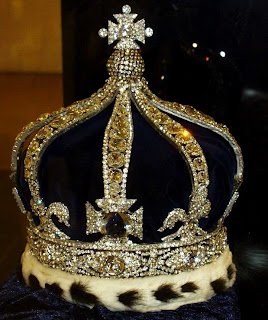 Deeply associated with divinity and righteousness, power and authority, the head-dress known as the Crown retains potent symbolism.

In modern times many nations have replaced their crowned ruler for a Republic. This occurred relatively early in England's history, following the execution of King Charles I in 1649 and the establishment of a Commonwealth from 1649 until 1660. However, with the death of Oliver Cromwell in 1658 and the ineffective rule of his son Richard, England opted for the less frequently trod path historically of Restoration with the coronation of King Charles II occurring in 1661. From the Restoration of Monarchy to the present day those resident in the United Kingdom are not defined as citizens possessing  a charter of Rights, but as subjects of the current crowned monarch.

The Penguin Dictionary of Symbols notes - Three factors supply the bases of the crown's symbolism. Being set on the crown of the head gives it an overriding significance. It not only shares the qualities of the head -the summit of the body - but also the qualities of whatsoever surmounts the head itself, a gift coming from on high. It sets the seal of transcendence upon the character of any accomplishment. Its circular shape is indicative of perfection and of its sharing in the heavenly nature of which the circle is a symbol. It marries, in the person crowned, what is above and what is below. As a reward of virtue, crowns are promises of eternal life on the pattern of that of the gods. Finally, the very material, be it vegetable or mineral, from which the crown is made defines by the fact that it is dedicated to this or that god or goddess, the nature of the heroic deed accomplished and that of the prize awarded by assimilation with Mars, Apollo or Dionysus. At the same time it reveals the supraterrestial powers entrapped and used to achieve the deed rewarded.

The physician and philosopher Sir Thomas Browne's baroque and phantasmagorical discourse The Garden of Cyrus may be viewed as the Crown and obverse of the literary coin forged by the adherent of Vulcan's Art. It's purple prose apotheosis includes the reassurance that-

All things began in order, so shall they end, and so shall they begin again; according to the ordainer of order and mystical Mathematicks of the City of Heaven.

a statement which has been interpreted as a prophecy of the return of monarchy to England. And in fact within months of the first publication of The Garden of Cyrus (both diptych discourses are prefaced with a dedicatory epistle dated May 1st 1658) the Lord Protector Oliver Cromwell died (September 3rd 1658). The stage was set for the exiled King, Charles to return to England in 1660. Eleven years later, the Stuart Restoration monarch when visiting Norwich in 1671, duly knighted his loyal subject.

Far too subtle a thinker to embroil himself in political dispute, yet at a time when England had no crowned Head of State, the staunch Royalist Thomas Browne in The Garden of Cyrus discreetly draws his reader's attention to various types of Crown as worn by Augustus, Ptolomy, Alexander and Aaron. Crucially, each of these historical rulers, along with the titular King Cyrus are cited by Browne in his sketching of the Platonic types or eternal patterns in nature, in this case human nature, as being essentially a 'prototype' or archetype - that of the 'wise ruler' no less; and in fact the discourse includes one of the earliest usages in English literature of the very word 'archetype'. Elsewhere, the Biblical figure of Solomon along with the Greek god Jupiter and the Egyptian Pharaoh are cited as examples of  the archetype of the wise ruler. The Norwich physician and Ur-psychologist tentatively sketches another equally important archetype in Cyrus - his allusion to Juno, Venus, Cleopatra, Helen, Diana and Isis may be interpreted as an anticipation of the anima figure of the 'Eternal Female' or 'Great Mother' in Jungian psychology. Touching upon various kinds of Crown Thomas Browne observes-

The Triumphal Oval, and Civical Crowns of Laurel, Oake, and Myrtle, when fully made, were pleated after this order. And to omit the crossed Crowns of Christian Princes; what figure that was which Anastatius described upon the head of Leo the third; or who first brought in the Arched Crown; That of Charles the great, (which seems the first remarkably closed Crown,) was framed after this manner; with an intersection in the middle from the main crossing barres, and the interspaces, unto the frontal circle, continued by handsome network-plates, much after this order. Whereon we shall not insist, because from greater Antiquity, and practice of consecration, we meet with the radiated, and starry Crown, upon the head of Augustus, and many succeeding Emperors. Since the Armenians and Parthians had a peculiar royal Cap; and the Grecians from Alexander another kind of diadem. And even Diadems themselves were but fasciations, and handsome ligatures, about the heads of Princes; nor wholly omitted in the mitral Crown, which common picture seems to set too upright and forward upon the head of Aaron: Worn sometimes singly, or doubly by Princes, according to their Kingdomes; and no more to be expected from two Crowns at once, upon the head of Ptlomy. 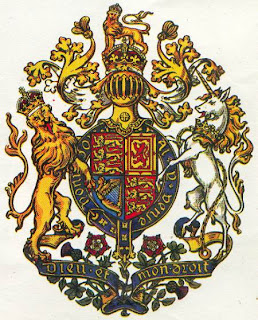 Royal coat-of-arms with 9 Lions and 4 Crowns 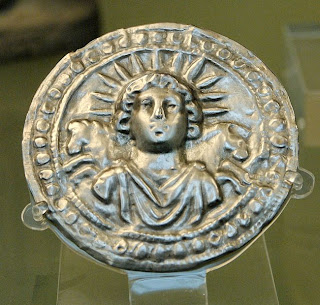