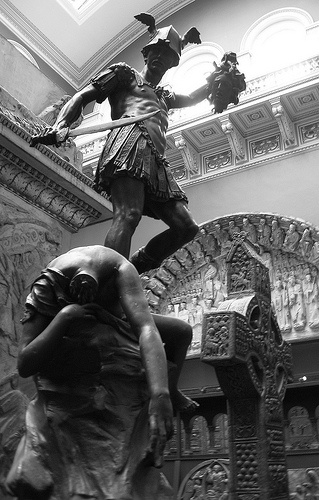 The myths of antiquity became increasingly popular during the Renaissance. The Greek myth of Perseus rescuing Andromeda for example was painted by many artists in the latter half of the sixteenth century. Another popular myth as subject-matter in art, and equally dramatic, was that of the hero Perseus and his encounter with the hideous, serpent-haired gorgon Medusa. Whoever gazed upon Medusa's face immediately turned into stone. Perseus however, successfully avoided such a fate and decapitated her.

Like several other artists of his generation, the Dutch sculptor Hubert Gerhard (b. Hertogenbosch c.1550-1620) left his homeland as a young man, probably to escape from the political upheavals and iconoclasm experienced by the Netherlands circa 1566-67. Gerhard moved to Italy, training how to design and cast bronze sculptures in Florence in the circle of Giambologna, who heavily influenced his style. Gerhard's dominant subject-matter, as with many Northern Mannerist artists, was the mythological gods of antiquity. His early patrons, the banking family the Fuggers of Ausgsburg, commissioned Gerhard to create for their castle at Kirchheim, a mantelpiece, bronze ornaments for a fountain of Mars and Venus and a bronze on a base bordered by fantastic imagery.

While at Augsburg, Gerhard first met the Florentine-trained artist, Friedrich Sustris (1540-1599). When Sustris became the artistic superintendent for Wilhelm V of Bavaria (1548-1626) he persuaded Gerhard to live in Munich, where the sculptor duly resided from 1584 to 1597. Gerhard created large bronzes for  the fountain, garden and grotto of Wilhelm's ducal palace. He prepared the monumental bronze St. Michael Vanquishing Lucifer that adorns the façade of the Jesuit church of St. Michael's in Munich and with Carlo's assistance he also made about fifty over life-size terracotta statues of saints and angels which line the interior of St. Michael's church.

With the financial crisis of 1597, which forced Wilhelm V to abdicate, Gerhard and most of the court's artists were suddenly unemployed. Between 1599 and 1613 Gerhard next worked under the patronage of Archduke Maximilian III of Austria, first in Bad Mergentheim and then in Innsbruck. Unlike Wilhelm V however, Maximilian III commissioned mostly small-scale bronzes, including equestrian portraits and mythological statuettes, in addition to his tomb and other projects.

In 1602 Gerhard added two bronze sculptures to the Augustus fountain in Augsburg in which the four rivers of the city are represented by statues of four river gods around the fountain's basin, the Holy Roman Emperor Rudolph II when viewing  them critically said  -


the workmanship is subtle and pure, but the positioning of the figures is rather poor. Master Adriaen, as his Imperial Majesty's sculptor is far more accomplished in this.

Rudolf's withering remark highlights the rivalry which existed between two art-loving connoisseurs, for at the time Gerhard was employed by Rudolf's younger brother, Archduke Maximilian III of Austria, while his contemporary Adriaen de Vries (1556-1626) was resident sculptor for  Rudolf II.

Gerhard returned to Munich in 1613, where he worked until his death seven years later.

Although Gerhard worked primarily in the medium of bronze he also sculptured in terracotta a quartet of personifications of the seasons. In Gerhard's set of four figurines Spring sits holding a cornucopia or horn or plenty, Summer also female, holds a sheaf of corn, Autumn is represented by a cheerful, wine-drinking youth, while a care-worn, bearded old man personifies Winter.

There's an extraordinary affinity to certain themes and imagery encountered in Gerhard's Four Seasons to the four marble figurines of the Layer monument (anon. Norwich, circa 1600). Intriguingly, Hubert's quartet  are also a complex of opposites in their juxtaposition of classical antiquity and contemporary figures, mortal and deity, male and female, youth and age, pleasure and suffering. Gerhard's sculptures are therefore valuable pieces in completing the jigsaw puzzle of identification of the stylistic source and possible sculptor of the Layer monument's quartet of figurines.

Another remarkable affinity of style occurs between Gerhard's sculpture of the mythological sea-god Neptune (below) and the figurine of Labor (figure higher up on the right here) of the Layer monument. Dating little more than a decade apart, both figures are depicted with wrinkled brows, gnarled high cheek-bones, care-worn expressions and shaggy tufted, highly-stylized designer beards. 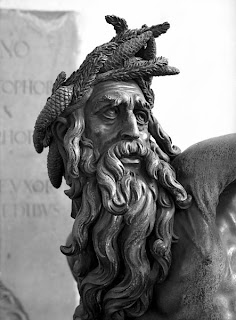 The combined factors of close chronology, Gerhard's predilection for producing sculpture in groups of four, his juxtaposition of figures from Classical antiquity alongside the contemporary, as in his allegorical personifications of  Four Seasons, are indicative of an affinity between him and the anonymous sculptor of the Layer monument. However, the quality of artistry, the sculptural medium of marble and geographical distance make it fairly unlikely that the four figurines of the Layer monument were carved by Gerhard, who worked primarily in bronze. In any event Gerard's essentially Northern Mannerist art retains an affinity in subject-matter and style to the Layer monument's figurines. Indeed, as its recorded that Gerhard maintained a workshop with apprentices named as Colin and Alexander Kaspar Gras, it's possible the four figurines of the Layer monument share not only the esoteric template of the quaternity with Gerhard's Four Seasons, but may originate from a workshop closely associated with the Dutch sculptor.

I  have no qualms in admitting that most of this post is copied from Wikipedia, for upon discovering it had no entry on  Hubert Gerhard  I wrote one, based and indebted to this review -

Link to page of sculpture by  Hubert Gerhard
1 comment: