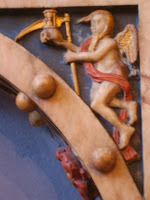 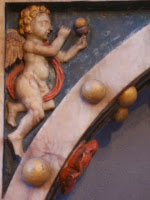 The city of Norwich is the home to over thirty medieval churches, more than other city north of the Alps. Norwich was once a thriving centre of European trade and commerce, as well as a place of significant religious and cultural importance throughout the Medieval and Renaissance era; it's not too remarkable therefore to discover evidence of esoteric symbolism in art-work such as funerary sculpture in the city's churches.

Located at Saint Andrew's the second largest of Norwich's medieval churches, there's a superb example of how symbolism which originated from pre-Christian and esoteric sources, occasionally infiltrated Christian iconography.

Not unlike the monumental funerary sculpture in the adjacent parish, at the church of Saint John the Baptist, the Suckling monument, which is also from the early 17th century, has also the decorative motives of child and old man (puer et senex) .

During the Renaissance the Greek god Kronos, who later became identified with the Roman god of Saturn, was frequently depicted wielding a harvesting scythe as symbolic of "Father Time". With his attributes of hour-glass, scythe and skull, the right-hand decorative figurine on the Suckling monument clearly alludes to Time and mortality. Just like the Layer monument where an aged, grey-bearded Saturnus figure is also accompanied by a putto figure who is playing with cup and bubble, his mythological counterpart and polar opposite, the elusive 'deity' of alchemy, the trickster figure, Mercurius. The remnants of the double symbol of  puer et senex survive in modern-day cartoon depictions of the Old Year greeting the New Year in.

The juxtaposition of youth and age in religious symbolism far pre-dates Christianity. The seminal scholar of comparative religion and alchemy C.G.Jung (1875-1961) confirms the close relationship of the double symbol Mercurius and Saturnus in esoteric symbolism. On more than one occasion he succinctly asserts in his collected writings-

'Graybeard and boy belong together. Together they play a considerable role in alchemy as symbols of Mercurius'. - CW 9 i :396 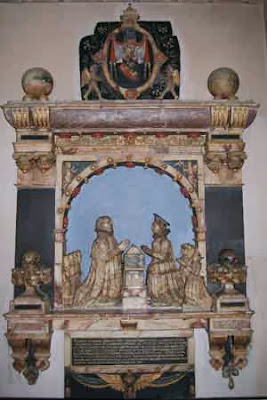 Monument of Sir Robert Suckling (1520-89) at the church of Saint Andrew's, Norwich.

Click on images to enlarge
See also - Mercurius and Saturnus
More on the Suckling Monument
No comments: