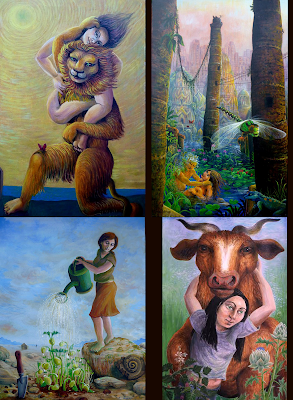 Peter Rodulfo is a visionary and prolific British artist. A casual familiarity with his prodigious output soon reveals a wide variety of subject-matter and thematic concerns, often expressed through a wide flexibility of  styles and techniques.

The diversity of Rodulfo’s artistic output includes portraiture, not only of people, but also creatures, real and imagined, often within fantasy or recollected landscapes; these are juxtaposed, sometimes within a metaphysical frame-work, or through a multi-layered perspective. His art is frequently humourous in setting and imagery; together these diverse and broad-ranging artistic themes and concerns converge and unify in Rodulfo's art, often within a single canvas.

Rodulfo’s art may with some justification be defined as Neo-Mannerist, for like Renaissance Mannerism, his art often involves movement, a manipulation of space through elongated axes prolonging space, a vibrant and emotional immediacy of colour, and a metaphysical or spiritual intensity, which in Rodulfo’s case, has its roots in a secular New Age or counter-culture world-view.

In contrast to his often crowded and hectic, multi-layered in perspective art, there are also calmer and reflective art-works by Rodulfo. In his mandala-like Quadriptych of Loving-Kindness (2012-2015) a simple message is effectively expressed, none other than loving-kindness towards each other, the animal kingdom and organic life on earth in general. Just as Mannerist art was a product of Renaissance humanism, and therefore inclined towards emphasis of the relationship between humanity and nature - so too Neo-Mannerist art such as Rodulfo's, expresses the same message.

A Mandala (Sanskrit for a circle) is usually an art-work originating from Eastern religions of geometric form which invites contemplation. The most common mandala in Western art is the tetramorph which consists of four symbols to represent the four Gospel Evangelists. The Swiss psychologist C.G.Jung is credited with re-introducing the form of the mandala to the Western world and discusses how mandalas encourage and assist awareness, adaptation and integration of the individual's place in the world. Rodulfo's Quadriptych of Loving-Kindness perfectly fits this description.

It should not really be necessary to even begin defining what loving-kindness is. Far from being either an abstract or esoteric concept, loving-kindness is the very foundation which will ensure humanity's survival and well-being, or alternatively, its scarcity result in humanity’s extinction. Yet, we live in an age where the challenge as to how humanity can live in peace and harmony, sharing the world’s quite finite resources, vital for sustaining human life, and without resorting to war, threatens human existence. Understanding, and more importantly, practising loving-kindness is an imperative. Its worthwhile therefore reminding ourselves of the wide-ranging meanings of the much abused word, namely, Love.

The Ancient Greeks had four distinct words for love: agápe, éros, philía, and storgē which roughly approximate as affection, friendship, eros, and charity. In both Christianity and Buddhism there are no less than four differing qualities to love,  Buddha himself stating,

“As Brahma is the source of Love, to dwell with him you must practice the Brahmaviharas - love, compassion, joy, and equanimity.”

God's Lovingkindness is frequently alluded to in the Book of Psalms, while in the esoteric discipline of the Judaic Kabbalah, one of the ten attributes of God, known as the Sephiroth is named Chesed, the Hebrew word for Loving-Kindness. A celebrated expression in Christianity on love occurs in Saint Paul’s words-

However, we live in an era where spirituality is under-valued and even denigrated, and in which materialism and economics dominates and colours the lives of many living under Government’s who wilfully encourage economic competition above common humanity - thus promoting rivalry and inevitably rudeness, hostility, intolerance and inconsideration toward others, (all of which are the antithesis of loving-kindness).

Nevertheless its worthwhile reminding ourselves of how loving-kindness can be lived - as a conscious awareness of consideration towards everyone encountered in daily life as an equal, and worthy of respect and courtesy, nor exempt from random or spontaneous acts of love and kindness.

It should be noted that Rodulfo’s quadriptych imitates the template of most quaternities - as a 3+1 composition consisting of 3 completely unconscious archetypal images created without conscious reference, or influence of astrology and its symbolism - Rodulfo having no particular interest in astrology whatsoever; it was only when the artist's attention was drawn to the fact that three of his paintings displayed possible astrological and elemental symbolism, and only then, three years later, that he consciously painted the fourth and final quarter of his mandala, entitled Befriending a Bull (2015) purely in order to complete his first quadriptych.

Because the artistic imagination often roams and delves into the depths of the collective unconscious, where archetypal symbolism slumbers, its possible to attribute symbolism associated with the four elements (Earth, Air, Water and Fire) as well as quite distinct attributes of the so-called ‘Fixed Cross’ of astrology, (Leo, Aquarius, Scorpio and Taurus) to  the imagery of Rodulfo’s quadriptych.

Rodulfo’s Quadriptych of Loving-Kindness can be grouped into two related pairs. The first pair of bull and lion, can easily be equated to the zodiac signs of Leo and Taurus. Less obvious, Girl with Watering-can, may be interpreted as alluding to the water-bearing zodiac sign of Aquarius, while the ‘lost civilization’ fantasy involving a dragon-fly zooming towards the viewer, can be connected to a predatory insect not dissimilar, the scorpion. There's also a neat juxtaposition of the existential flux between solitude and loving relationship between this pair of paintings. Finally, its worth noting that the design of Rodulfo's quadriptych mirrors the same template of the funerary sculpture of the Layer monument (c. 1600) as an alchemical mandala, having the symbolism of the elements Fire and Water (Leo and Scorpio) above those of  Earth and Air (Taurus and Aquarius) below.

Leaving aside esoteric concepts, it is worthwhile contemplating the merits of each segment of Rodulfo’s Quadriptych of Loving-Kindness individually as intended, purely as paintings. 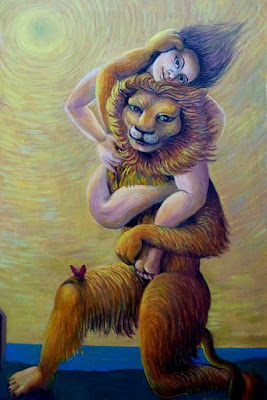 Life is a pure flame, and we live by an invisible sun within us

In what is the warmest in emotional feeling of all four paintings, a young girl is carried upon the shoulders of a lion who possesses an appearance perhaps similar to the lion Aslam in C.S. Lewis's Narnia.

The lion's matted and shaggy fur, along with a radiant sun are skilfully delineated. Both lion and girl embrace and gaze towards the viewer in a loving manner. The gentleness of the lion is here emphasised by a butterfly resting upon his knee.

To repeat, although in all probability not consciously alluding to any particular symbolism, the artist nonetheless has linked two symbols connected in esoteric and mundane symbolism, namely the solar and the leonine, both of which are associated with kingship and royalty in their symbolism. 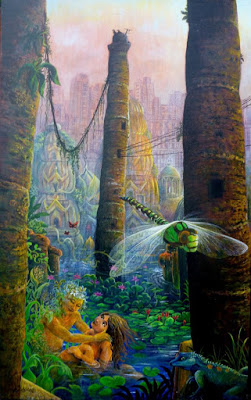 Of deeper doubt is its Topography, and local designation, yet being the primitive garden, and without much controversy seated in the East.

A garlanded man and adoring woman gaze deep into each other's eyes, oblivious to all around them, while a finely-detailed dragon-fly zooms towards the viewer. With its intriguing pylon structures this painting may be considered an example of fantasy landscape, but in fact its a product of Rodulfo's recollection of his extensive travels, himself stating of it as, "not really fantasy lands, just interpretations of my experiences in the world."

A considerable depth of landscape is conveyed with skilled draughtsmanship, while a primary concern to the viewer is the dragon-fly with its finely worked, gauze-like wings zipping towards the eye. A large lizard who is looking on adds to the tension and ambiguity of this Eden-like vision. 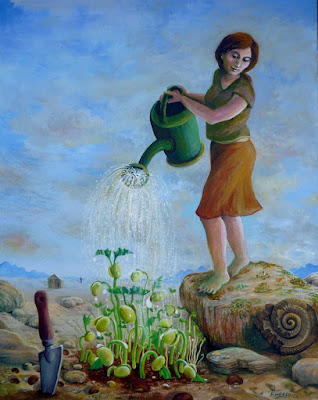 Some confined their delights unto single plants

In what is the most reflective and austere in mood of all four paintings, a young woman holding a watering-can concentrates upon watering plants. Of particular note is her  pose, worth comparing to the central figure in Rodulfo's As the Elephant Laughed, which features another example of the artist's ability to successfully portray the human figure in a studied pose.

A calmness and stillness is conveyed, reminding the viewer that some acts of kindness, along with most artistic creativity and individual growth are of a solitary nature, including tending for the organic and vegetable kingdom. As ever, careful detail includes a trowel in the foreground along with a finely-worked, large nautilus-like shell. Fittingly for its appended esoteric symbolism, a low eye-level accommodates a large skyscape. Depth of field is also conveyed through a shed and mountain-range in the far distance. But not to look so high as Heaven or the single Quincunx
of the Hyades upon the head of  Taurus.

It was not until 2015, three years after the completion of the first three paintings in the quadriptych, that the artist's attention was drawn to the fact that specific elemental and astrological symbolism could be designated to each of his respective paintings. Rodulfo then completed the fourth and final painting of his mandala, with no other artistic motive than to complete a quadriptych of related canvases.

However, as the psychologist C.G. Jung noted, many quaternities involve a  3 + 1 structure, one being of a singular, distinct nature to the others, in this case, a conscious creative art-work to compliment three others.

Like his painting of Lion and young Girl an animal and human are depicted in a relationship of loving-kindness. The bull stands proud and protective with large bovine eyes gazing directly to the viewer.  Set in what appears to be a lush water-meadow, Rodulfo's Befriending a Bull highlights the artist's ability to depict not only the human and animal form but also intimate inter-action and mutual respect.

Loving-kindness in its entirety involves not only kindness towards others but also all of the animal kingdom which inhabits and shares the world with humanity. Sadly however, like the planet itself, mankind has exploited the animal kingdom, yet here in Rodulfo's canvas, the direct gaze of a dignified bull questions the viewer as to whether he deserves exploitation.

A big thanks to Dawn Wilson  for her Photoshop skills and patience.

Peter Rodulfo's 'As the elephant Laughed'.