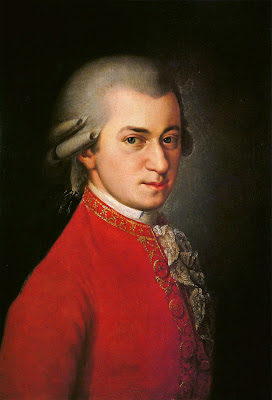 No-one really knows the full motivation or reason why Mozart composed what were to be his last three symphonies, or whether he heard any of them performed. What is certain is that in his last three symphonies, Mozart expanded the canvas of the relatively new genre of the symphony in both duration and emotional scope, establishing the composer's right to express personal feelings, thus paving the way for the Romantic symphony of the nineteenth century.

There’s a tendency which has developed over the centuries, to mythologise Mozart as a near Christ-like figure. His being misunderstood by society, the poverty of his last years, and early death at an age close to Christ's, along with music sounding as if from another-world, heavenly or trance-like, which is heard occasionally in his music, are factors also contributing towards a ‘deification’; Mozart however, was an all-too-human figure, he possessed what would  today be considered a coarse, and even scatological sense of humour; he enjoyed playing billiards, skittles, dancing and drinking, and at one time or another he kept as pets, a canary, a starling and a dog, along with a horse for recreational riding. It is now considered likely that Mozart's unique experience of travelling and touring extensively throughout Europe as a child and teenager, enduring the rigours and inconveniences of travel, along with exposure to various viruses and illnesses so prevalent throughout 18th century Europe, may have contributed to his early death.

In stark contrast, ten years later, aged 31, in one of a series of desperate begging letters to fellow Mason, Michael Puchberg, Mozart wrote-

I am obliged to tell you frankly that I cannot possibly pay back so soon the sum you lent me......My circumstances are such that I must absolutely get money... I am sorry enough to be in this situation, but that is the very reason why I want a fairly substantial sum for a fairly lengthy period, as I can then prevent its recurrence......I have done more work in ten days than in two months at any other lodgings, and were I not visited so frequently by black thoughts (which I must forcibly banish) .......  27th June, 1788

Mozart’s last three symphonies were written in a seven week period of white-heat creativity during the summer of 1788, after he and his family moved out of central Vienna to the suburb of Alsergrund. They've been described by musicologist Ralph Hill thus -

The first is, we may say, lyrical, the second dramatic, the third ceremonial. But they vary not only in character: they do so also in mood. The first has a kind of autumnal but not melancholy mellowness; the second is tragic and idyllic by turns, and somehow the latter atmosphere poignantly intensifies the former; the third utters festive sounds but at the same time gives evidence of an intense concentration of thought, the kind of foresight and hindsight that distinguishes a great mathematician or chess player.

Symphony no. 39 in E flat major (K.543) was added to Mozart’s personal catalogue, on June 26th 1788. Its solemn adagio opening movement has been likened to music accompanying a Masonic ceremony. According to Ralph Hill, ‘one secret of Mozart’s greatness... is his ability to accommodate a great many emotional or dramatic contrasts within a single tempo.’

The finale of the 39th symphony is rhythmically vigorous and startling in its sudden changes of key.

Mozart’s 40th symphony in g minor  (K. 550) was completed according to the composer’s personal catalogue on July 25th 1788. Its opening movement is probably the most well-known of all Mozart’s symphonies, partly from a kitsch pop arrangement made by Waldo de los Rios in 1971. But in fact, an uneasy calm pervades the  g minor symphony. An attentive hearing reveals there's scarcely a happy moment in any of its four movements. An under-current of quiet desperation, resignation, anxiety and even despair pervades it, making it fitting mood music for our own age.

Often named the Great g minor symphony in order to distinguish it from an earlier g minor symphony composed some fifteen years earlier in 1773 (K. 183) when Mozart was just 17 years old, the so-called, "little g minor" symphony, uniquely scored for four horns, is also full of tension and syncopated rhythms. It was influenced by the proto-Romantic German literary and music movement of Sturm und Drang (Storm and Stress) in which individual subjectivity and extremes of emotion are given free expression.

Mozart's 40th symphony in g minor, in contrast to his more conventional and cheerful music, packs a powerful emotional punch. Its minuet contains barely suppressed anger against the pomposity of the upper-classes to whom he was obliged to serve for much of his life. Here, the aristocracy appear full of self-importance as they approach the dance-floor when the invitation to the dance is announced.


Mozart’s 41st symphony (K 551) bears the nickname of The Jupiter, and is the most jovial and light-hearted of all three symphonies. An air of comic opera pervades its opening movement, while its technically brilliant final movement is described by Ralph Hill thus-

‘the ear catches everything going, so lucid and well-aired is the score, and it all flows by in a stream of beautiful music that will satisfy even those who have no notion of the incredible skill that went into its making...the attentive listener will come across..tunes combining in canon with themselves or fitting against their own inversions, entries overlapping closely in fourfold imitation..Mozart’s perfect sense of proportion and timing knows exactly when to cease showing off those dizzy contrapuntal feats, and not the least wonderful proportions of this movement are those where the music suddenly smooths itself out into a plain statement, as if nothing out of the way had happened at all.’

The Jupiter's gorgeous andante is a quintessential example of Mozartean serenity.

Discussion of key signatures in Mozart’s music, along with his artistic relationship to keys, has been a perennial debate amongst musicologists. According to Wolfgang Hildesheimer for example -

If we hear Mozart’s keys as conscious choices, not as the spontaneous expression of the composer’s momentary frame of mind, we by no means imply that we are not also experiencing the minor keys as “gloomy”, or “tragic,” or sometimes even “despairing.” Our feeling is not limited to the minor itself, but overflows and spreads, often intensified, into a major key within the minor, especially E-flat major within G minor.

Yet Hildesheimer also concedes, 'Mozart's musical thinking eludes us. He puzzles us most in those places where the music is serious, even when the material would not seem to warrant it.'

It was in 2009 while in Amsterdam that the Austrian conductor Nikolaus Harnoncourt (1929 - March 6th 2016) announced - "I have just discovered that the last three Mozart symphonies are an instrumental oratorio." Harnoncourt reasoned that because the 39th Symphony is the only one with a slow introduction, the 40th opens gently, while the 41st symphony is the only one with a full-blown finale, and that because thematic connections can be detected across all three symphonies, Mozart’s last three symphonies are in fact an inter-related triptych. Although Nikolaus Harnoncourt’s proposal that all three symphonies are a related and inter-connected triptych is without precedent, there's nonetheless also a possibility that Mozart may have taken as a model for his triptych, an example from the symphonies of the so-called 'Father of the symphony’, Joseph Haydn (1732-1809).

It was Haydn's good fortune to be invited in 1761 as Vice-Kappelmeister and placed in charge of most of the Esterházy musical establishment at Schloss Esterházy in Eisenstadt, and later on at Esterháza, a grand new palace built in the Hungarian marshes. At the very beginning of his residency at Esterhaza Joseph Haydn wrote three symphonies, numbered as 6, 7 and 8, which soon acquired the nicknames of 'Le Matin’, ‘Le Midi’ and 'Le Soir’ because they were considered to depict the progression of a day.

There's a possibility that these three early Haydn symphonies were known to Mozart. We will never know for certain whether or not this is true: but given the fact that the two composers, who became close friends, had a mutual respect, influenced each other and studied each other's compositions carefully, its just possible that these three early Haydn symphonies may have known of, or at least heard of through Haydn himself recollecting the beginning of his long service to the Esterhazy court to Mozart.

One can only speculate as to what was the inspiration for Mozart's much larger in scope, emotionally contrasted, and enigmatic symphonic triptych of 1788.