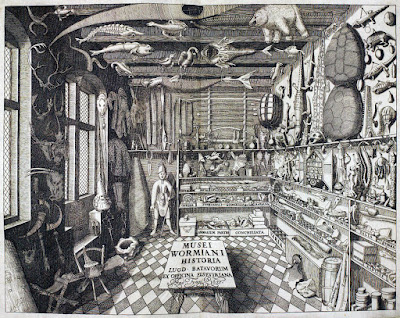 The frontispiece engraving accompanying Ole Worm’s Museum Wormianum (1655) provides an abundance of clues to the contents of Sir Thomas Browne's own ‘Cabinet of Curiosities’.

The Danish physician Ole Worm (1588-1654) like Browne, was a physician, a philosopher of Nature and antiquarian. In Worm's museum zoological, botanical and mineral items, as well as scientific instruments were exhibited. It even included a wheel-operated automaton with flexible limbs which reputedly could move around and pick up objects.

‘As to the display of curiosities in my museum, I have not yet completed it. I have collected various things on my journeys abroad, and from India and other very remote places I have been brought various things […] that I conserve well with the goal of, along with a short presentation of the various things’ history, also being able to present my audience with the things themselves to touch with their own hands and to see with their own eyes, so that they may themselves … acquire a more intimate knowledge of them all.’ [1]

An example of Ole Worm’s modern, empirical thinking occurs in his asserting in 1638 that the unicorn did not exist and that alleged unicorn horns were simply those from the narwhal. 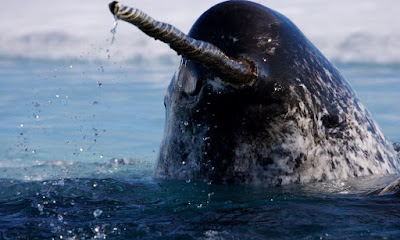 Sir Thomas Browne was also skeptical of the  existence of the unicorn and devoted a chapter in his encyclopaedia Pseudodoxia Epidemica (1646-72) upon the topic. He acknowledges Worm's judgement and informs his reader that several other creatures other than the mythic unicorn possess a horn. [2]

There are also three Unicorns Horns, little differing in length; the longest being five foot and a half:... These were of the Sea-Unicorn, or the Horn or long wreathed Tooth of some Sea-Animal much like it, taken in the Northern Seas; of which I have seen many, both in Public Repositories, and in Private Hands.  My honoured Father Sir T. B. hath also a piece of this sort of Unicorns Horn burnt black, out of the Emperor of Russia's Repository, given him by Dr. Arthur Dee, who was Son to Dr. John Dee, and also Physician to the Emperor of Russia, when his Chambers were burned, in which he preserved his Curiosities. [3] 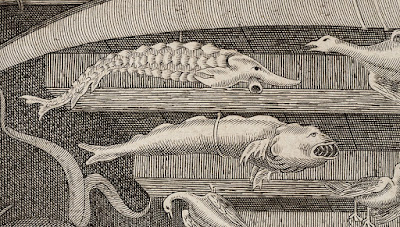 Suspended from the ceiling of Worm’s museum there can be seen with its fearsome teeth, a Lupus Marinus or Sea-wolf fish. Like Worm, Browne lived close to the North Sea and took a great interest in the strange creatures of deep found there, writing in a letter -

'Lupus Marinus you mention upon a handsome experiment but I find it not in the catalogue. This Lupus Marinus or Lycostomus is often taken by our seamen which fish for cods. I have had divers brought me, they hang up in many houses in Yarmouth'. [4]

'found to be taken not out of Toads heads, but out of a Fishes mouth, being handsomely contrived out of the teeth of the Lupus Marinus, a Fish often taken in our Northern Seas, as was publicly declared by an eminent and Learned Physician. [5]

In all probability both the ‘Learned Physician’ and the catalogue  Browne alludes to are the Danish physician Ole Worm and the catalogue of Museum Wormianum. The 1711 Sales Auction Catalogue of Thomas Browne and his son Edward's libraries lists an edition of Worm’s Museum Wormianum (1655) as once in the learned Norwich physician's library. [6] Its tempting to speculate that an exchange of correspondence, now long lost may have existed between the two seventeenth century Natural Philosophers having so much in common with each other.

with many thanks I return that noble Catalogue of Books, Rarities and Singularities of Art and Nature, which you were pleased to communicate unto me. There are many Collections of this kind in Europe. And, besides the printed accounts of the Musæum Aldrovandi, Calceolarianum, Moscardi, Wormianum; an

Browne's inventory of lost, rumoured and imagined books, paintings and objects is an Ur-text of Magical Realism. While the titles of its 'rare books' appeal primarily to the scholar, those of 'rare paintings' many of exotic locations and dramatic events in the Bible and ancient world provide clues to Browne's taste and aesthetic in paintings.

The objects listed in Museum Clausum are intriguing if not bizarre. Once more stones in creature's heads are encountered. Its only through a familiarity with alchemical symbolism that any interpretative sense  can be made of this curio-

Item 7: A noble stone or Quandros taken out of the head of a Vulture. [7]

Item 23 : 'Batrachmyomachia, or the Homerican Battle between Frog's and Mice, neatly described upon the Chizel Bone of a large Pike's Jaw.

The distinguished Browne scholar C.A. Patrides concurs with and amplifies my apprehension of the artistic agenda of  Museum Clausum stating -

'Most of the items are so utterly and absolutely improbable that it is positively impossible to mistake their burden. It is more likely indeed, that Browne endeavoured not to obscure but to underline the inherent absurdity. In this respect, the context he provides for the collection argues an effort to call attention to yet another "vulgar error" of his time, the indiscriminate accumulation of "rarities" by scientists who should have displayed less virtuosity and more judgement.' [8]

Sadly, the fate of a large percentage of Browne’s museum, in particular its birds (he was a keen bird fancier and at one time or another kept an owl, Golden Eagle, Bittern and ostrich some of which were preserved through taxidermy) was sealed in 1667 when Norwich's civic authorities ordered their destruction. The act was justified as a precautionary measure, just in case its exhibits were a potential harbinger of disease in the wake of the Plague which had recently decimated the City's population.

Nevertheless, from scattered statements in Browne's collected 'Notes and Letters on the Natural history of Norfolk, more especially on the Birds and Fishes' (1902) its possible to identify a few items once on display in his museum. Like Worm’s museum, large-size creatures may have been suspended from its ceiling including a pelican, for Browne writes - 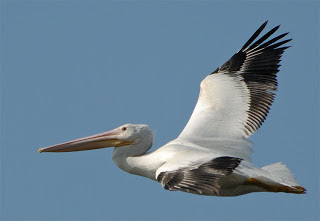 'Xiphias or gladius piscis or sword fish we have in our seas. I have the head of one which was taken not long ago entangled  in the Herring nets, the sword above 2 foot in length'. [10] 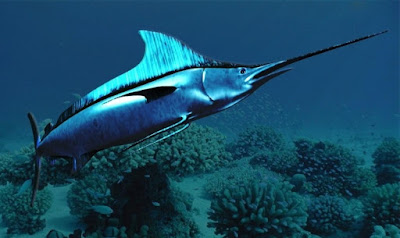 There is at present until the end of July this year, a free exhibition at the Royal College of Physicians in London of various artefacts associated with the life and times of Sir Thomas Browne, billed as his 'curious collection' and his 'curious approach to the world'.

The word 'curious' is often applied in descriptions of the physician-philosopher, however this may lead to some confusion if perceived to be exclusively a psychological or characteristic trait, when in his own account of himself he states-

'I am of a constitution so general, that it consorts, and sympathizeth with all things; I have no antipathy, or rather Idiosyncrasy, in diet, humour, air, anything'.[11]

Not that Browne isn't curious of course, but because of the possibility of misrepresentation, the word 'curious' covering a wide spectrum, a preciser and less ambiguous word to describe Browne other than the currently hard-working word 'curious' to my mind is 'enquiring'.

By all reports the exhibition at the Royal College of Physicians doesn't have quite the same volume of artefacts or the meticulous attention to detail as the fantastic reconstruction by the American photographer and artist Rosamund Purcell (b. 1942). Such disparities reflect how great a widening gap there is between mainland Europe and Britain in the value and appreciation of cultural heritage. Sir Thomas Browne remains an undiscovered continent in the understanding of the British scientific revolution, not least to the British themselves. The Royal College of Physician's exhibition is to be applauded for going some way in amending this deficit. 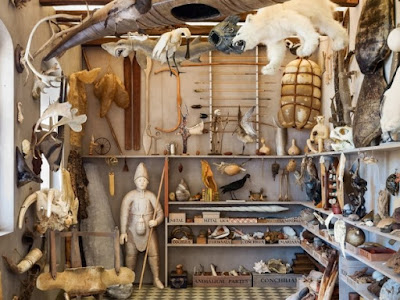 [7]  Martin Ruland's Dictionary of Alchemy (1612), a book once owned by Browne (Sales Catalogue page 22 no.119) defines a Quandros as -  'a Stone or Jewel which is found in the brain and head of the Vulture, and is said to be of a bright white colour. It fills the breasts with milk, and is said to be a safeguard against dangerous accidents'.
[8] "The Best Part of Nothing", Sir Thomas Browne and the Strategy of Indirection. C.A. Patrides Included in 'Approaches to Sir Thomas Browne: the Ann Arbor Tercentenary Lectures and Essays edited C.A. Patrides University of Misouri Press 1982
[9] Notes and Letters on the Natural history of Norfolk Jarrold and Sons 1902
[10] ibid.
[11] Religio Medici Part 2 :1