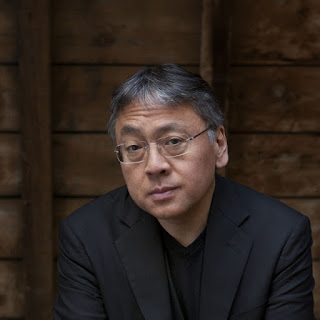 A Happy Birthday to Kazuo Ishiguro (b. Nov. 8th 1954, Nagasaki) recent winner of the Nobel Prize for Literature.

I'm not particularly well-qualified to share any observations upon Ishiguro’s novels, having only read his An Artist of the floating world (1986) some thirty years ago, and once again recently, his Never Let me Go a couple of years ago and The Remains of the day more recently.

Ishiguro completed his MA in Creative writing at the University of East Anglia in 1980, my Alma Mater, and I remember meeting the co-founders of UEA's prestigious creative writing course, the novelists Angus Wilson (1913-1991) and Malcolm Bradbury ( 1932 - 2000) way back in the 1970's.

1948: Japan is rebuilding her cities after the calamity of World War II, her people putting defeat behind them and looking to the future. The celebrated painter Masuji Ono fills his days attending to his garden, his two grown daughters and his grandson, and his evenings drinking with old associates in quiet lantern-lit bars. His should be a tranquil retirement. But as his memories return to the past - to a life and a career deeply touched by the rise of Japanese militarism - a dark shadow begins to grow over his serenity.

But of greater interest to myself is the postscript dated January 2016  to mark the occasion of his novel's 30th anniversary, in which Ishiguro states-

‘An Artist’ was written between 1981 and 1985, years of crucial, often fractious and bitter transition in Britain. The governments of Margaret Thatcher had brought an end to the post-war political consensus about the welfare state and the desirability of a ‘mixed’ economy (in which key assets and industries are owned publically as well as privately). there was an overt and strident programme to transform the country from one based on manufacturing and heavy industries, with large organised workforces, into a predominantly service-based economy with a fragmented, flexible, non-unionised labour pool. It was the era of the miners’ strike, the Wapping dispute, CND marches, the Falklands War, IRA terrorism, an economic theory - ‘monetarism’ - that characterised deep cuts to public services as the necessary medicine to heal a sick economy. .... This novel.....was shaped by the Britain in which I was then living: the pressures on people in every walk of life to take political sides; the rigid certainties, shading into self-righteousness and sinister aggression, of ardent, often youthful factions; the agonising about the ‘role of the artist’ in a time of political change. And for me personally: the nagging sense of how difficult it is to see clearly above the dogmatic fervours of one’s day; and the fear that time and history would show that for all one’s good intentions, one had backed a wrong, shameful, even evil cause, and wasted one’s best years and talents to it.  - London, January 2016

And in fact its often been commented upon that Britain and Japan share a number of cultural and socio-economic characteristics; both are heavily industrialised island nations which once pursued Imperial ambitions, both once possessed a formidable and large naval force, both are also nations which to the present-day have rigidly defined social hierarchies.

In his dystopian science-fiction novel Never Let Me Go (2005) the English county of Norfolk, where Ishiguro 'discovered' his vocation as a novelist, is described as a place where everything which is lost ends up -


“You see, because [Norfolk is] stuck out here on the east, on this hump jutting into the sea, it's not on the way to anywhere. People going north and south, they bypass it altogether. For that reason, it's a peaceful corner of England, rather nice. But it's also something of a lost corner.'

"Someone claimed after the lesson that Miss Emily had said Norfolk was England's 'lost corner' because that was where all the lost property found in the country ended up".

"Ruth said one evening, looking out at the sunset, that, 'when we lost something precious, and we'd looked and looked and still couldn't find it, then we didn't have to be completely heartbroken. We still had that last bit of comfort, thinking one day, when we were grown up, and we were free to travel the country, we could always go and find it again in Norfolk." - Kazuo Ishiguro, Never Let Me Go

In what is perhaps Ishiguro's most well-known novel, The Remains of the Day (1989)  which has been described as P.G.Wodehouse meets Kafka, Ishiguro explores psychological characteristics often associated with the English nation, the famous 'stiff upper lip' of emotional repression and inarticulateness; of individuals who are unable to express themselves adequately, a particularly English tragedy, often enhanced and facilitated through an inflexible and detrimental to equality, hierarchical class-system which refuses to die an honorable death.

Written in a  fluid, intimate and masterful prose style, distinctive characteristics of Ishiguro's prose, The Remains of the Day depicts England in the 1930's in which the class system dominates people's lives. It also describes how through political naivete the British upper-class were blind to the dangers of fascism spreading throughout mainland Europe, a political awareness which remains unlearnt in sectors of British society to the present-day, as Ishiguro himself states in an article on the result of the ill-conceived British referendum on membership to the European Union [1] as well as in interview on BBC television.


In the excellent Merchant-Ivory film adaption of Ishiguro's The Remains of the Day (1993) the magical chemistry between the actors Anthony Hopkins and Emma Thompson makes no small contribution in  portraying the fatal psychological inadequacy of the English, an inability of emotional expressiveness, aided and abetted by their obsession with status and social class. These factors blight what ought to have been a healthy love affair between the two central characters of Ishiguro's brilliant novel.