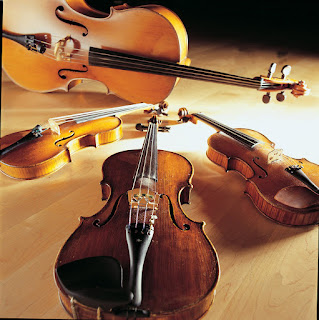 The String Quartets of Ludwig van Beethoven (1770-1827) are ranked amongst the greatest of the genre. Frequently technically innovative in structure, experimental in harmony with poignant  melodies and sharp wit, Beethoven's late quartets in particular express not only world-weariness and resignation but also serenity and transcendence. As such they are considered to be amongst the most enigmatic and mysterious of all music within the Western classical tradition.

Its worthwhile reminding ourselves of basics. A string quartet is a musical ensemble  consisting of four string players – two violin players, a viola player and a cellist. A prominent combination in chamber ensembles in classical music, most major composers from the mid 18th century onwards, wrote string quartets. The String Quartet was developed into its current form by the Austrian composer Joseph Haydn (1737-1809) whose quartets in the 1750s established the genre.

Ever since Haydn's day the string quartet has been considered a prestigious form which challenges the composer's art. With four parts to play with, a composer has enough lines to fashion a full argument, but none to spare for padding. The closely related characters of the four instruments combined cover a wide compass of pitch. The writer of string quartets must concentrate on the bare bones of musical logic. Thus, in many ways the string quartet is pre-eminently the dialectical form of instrumental music, and the one best suited to the activity of logical disputation and philosophical enquiry. [1]

The literary figure, polymath and contemporary of Beethoven, Wolfgang von  Goethe (1749-1832) explains the appeal of the string quartet thus-

"If I were in Berlin, I should rarely miss the Moser Quartet performances. Of all types of instrumental music, I have always been able to follow these best. You listen to four sensible persons conversing, you profit from their discourse, and you get to know the individual character of the instruments" [2]

Beethoven's early string quartets were composed between the summer or autumn of 1798 and the summer of 1800. They are clearly born of the tradition of his great predecessors, yet they already strain towards new directions. Succinct themes capable of extensive development; endlessly imaginative melodic manipulation; startling dynamic contrasts; complete, sometimes radical, formal mastery are all evident in Beethoven's first set of six quartets, Op. 18. [3]

The opening movement of the C minor quartet no. 4 of the set of  opus 18  displays much of the tension and angst of a minor key Mozart quartet, along with an indebtedness to Haydn's development of the quartet, as well as some distinctly Beethovian dramatic moments.

Of Beethoven's Middle quartets, the most important are the three so-called Razumovsky Quartets opus 59. (7, 8 and 9) named after the Russian prince who commissioned them. Dating from 1806 a contemporary music journal described the Razumovsky quartets as-

" long and difficult...profound and excellently wrought but not easily intelligible - except perhaps for the third, whose originality, melody and harmonic power will surely win over every educated music lover" [4]

In the Razumovsky quartets, along with his 3rd symphony, the Eroica Symphony in E flat major ,opus 55 (first performed April 1805) Beethoven breaks free from Classical form and convention towards Romanticism with the accent on feeling, self-expression and extended form. Its of these three quartets that Beethoven allegedly replied to an uncomprehending violinist, "Not for you, but for a later age".

The second movement of the E major String Quartet (no. 3 of opus 59) is often likened to music of hymnic transcendence. Beethoven's pupil, Carl Czerny relates it was conceived whilst the composer gazed at the night sky in contemplation of  'the music of the spheres'.


The New Grove Beethoven informs us that-

After completing the Ninth Symphony in early 1824 Beethoven spent the two and a half years that remained to him writing with increasing ease and exclusively in the medium of the string quartet. The five late string quartets contain Beethoven's greatest music, or so at least many listeners in the 20th century have come to feel. The first of the five, op. 127 in E flat of 1823-24, shows all the important characteristics of this unique body of music. It opens with another lyrical sonata form containing themes in two different tempos; the Maestoso theme melts into a faster one, wonderfully tender and intimate. [5]

The composition of  the A minor quartet op. 132 was interrupted by a serious illness in April 1825. An extraordinary 'Hymn of thanksgiving in the Lydian mode' forms its central movement in which the composer gives Thanks for the restoration of his health.

In the Quartet in B flat op. 130, the confrontation of themes in different tempos gives the opening movement an elusive, even whimsical feeling. A deliberate dissociation is intensified by the succession of five more movements, often in remote keys, with something of the effect of 'character pieces' in a Baroque suite. The feverish little Presto is followed by movements labelled by Beethoven Poco scherzando, Alla danza tedesca and Cavatina......[6]

The movement entitled Cavatina sees Beethoven at his most expressive with a heartfelt Welt abschied (Farewell to the World).


No discussion of Beethoven's Late String quartets can be complete without acknowledgement of the observations of Theodor W. Adorno (1903-69). Although the eminent philosopher and musicologist  himself found it impossible to complete a book upon Beethoven's String Quartets, nevertheless  he perceptively articulates defining qualities of Beethoven's late string quartets in the scattered fragments of his writings,thus -

There is in them something like a paring away of the sensuous, a spiritualization, as if the whole world of sensuous appearance were reduced in advance to the appearance of something spiritual.... It can be said that in the latest Beethoven the fabric, the interweaving of voices to form something harmonically rounded, is deliberately cut back. In Beethoven's late style there is altogether something like a tendency towards dissociation, decay, dissolution, but not in the sense of a process of composition which no longer holds things together: the disassociation and disintegration themselves become artist means, and works which have brought to a rounded conclusion take on through these means, despite their roundness, something spiritually fragmentary.  Thus, in the works which are typical of the true late style of Beethoven, the closed acoustic surface which is otherwise so characteristic of the sound of the string quartet with its perfect balance, disintegrates. [7]