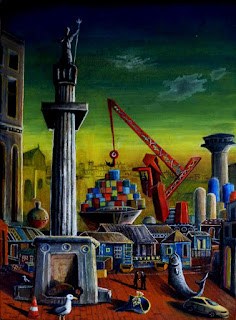 Within a few years of relocating his home and studio the visionary artist Peter Rodulfo (b.1958) has assembled an extraordinary portfolio of artwork which focuses upon the architecture and landmarks, street-life and social activities of Great Yarmouth. Rodulfo's Yarmouth Collection was exhibited at Skippings Gallery in Great Yarmouth  from April 14th until the 20th April 2018.

The Yarmouth Collection takes as its springboard observations made by the artist on walks throughout the town. Rodulfo's paintings depict the coastal town in both well-known and little-known guises. The walls which the artist invites the viewer to walk through are those of indifference and inattentiveness to one's everyday environment. Viewing the many gems of Rodulfo's Yarmouth Collection one not only acquires a new awareness of the sights and attractions of Great Yarmouth but also a deepened appreciation of the technical brilliance, wide stylistic diversity and protean imagination which the artist now commands, Rodulfo himself stating -‘Looking is like a language. The best art doesn't need a dictionary, but for general usage a context is needed’.

The chequered fortunes of what geographically speaking was once little more than a narrow peninsula of shingle sandwiched between the North Sea and the River Yare, is clearly visible in Great Yarmouth’s  varied architecture. On  South Quay there's a 13th c.Tollhouse and  a 17th-century Merchant's House, as well as Tudor, Georgian and Victorian buildings. Behind South Quay there’s a maze of alleys and lanes known as "The Rows" while Yarmouth’s medieval wall is the second most complete Medieval town wall in the country. With eleven of  its eighteen original turrets still standing, its more extant than nearby Norwich's surviving medieval city walls.

Rodulfo shares with fellow leading member of North Sea Magical Realism, Mark Burrell (b. 1957) an interest in the interaction between architecture and social activities; the townscape of Burrell’s hometown of Lowestoft  is often the setting of his luminescent paintings. As with Burrell however, its the overall ambience and mood of a location rather than meticulously reproducing architectural detail which interests Rodulfo.

An ambiguous, even unsettling atmosphere is evoked in Approach to the Pleasure-Beach (below).  In equal measure of light and dark, cheer and gloom, an overcrowded boat is seen ferrying people to a Pleasure-Beach, some of which resembles the Bolton bros. fun-fair. With its sombre sky and churning water along with overcrowded boat, the viewer is left to wonder about the lengths people will go to in their pursuit of pleasure. The painting's background includes Yarmouth's 'Golden Mile' complete with the Atlantis Tower, Waterways boating-lake, windmill and approaching train. 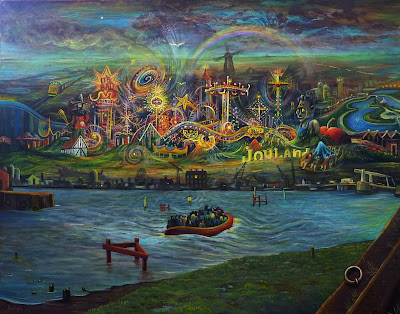 Portraiture of Yarmouth’s leading cultural figures also occurs in the Yarmouth Collection. The proprietor of the Hippodrome Circus, Peter Jay, along with his bearded and bespectacled son Jack Jay, the current Ringmaster, can be seen mingling among the performing clowns and trapeze artists of The Day the Clowns Left (77 x 61 cm ) (below) as well as a pair of giraffes who rubberneck into the frame.

Great Yarmouth Hippodrome was built in 1903 by the legendary Circus showman George Gilbert. Its Britain's only surviving total circus building, one of only three in the world. The painting's title alludes to the fact that clowns are to be dropped from the performing artists of the Hippodrome Circus, because they are now considered to be too scary for a family audience. 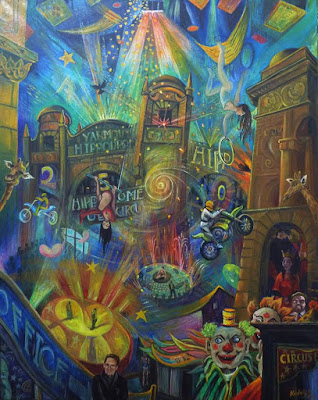 Another leading figure in Yarmouth's cultural life, the artist John Kiki, a founding member of the 'Yarmouth six’ art-group is portrayed in On the Corner (below) with its grinning coffee-cup faces, vertical word COLUMBIA and surly-looking seagull peering from behind it.  John Kiki can be seen standing beside a yellow van in the lower right corner of the canvas, while in the lower left  corner stands a hill-top Greek village, a visual reference to Yarmouth’s long-established Cypriot-Greek community. 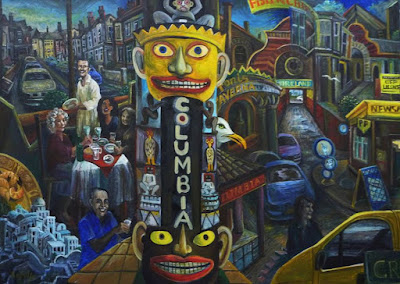 Rodulfo’s Quayside view of Yarmouth (below) far from either a pastiche or homage to Jan Vermeer’s famous View of Delft (1661) simply highlights an intuitive artistic perception - that Vermeer’s Delft and Yarmouth town share distinctive qualities of light, as well as cloud formations; both towns being situated on low land encompassed by water with a  full hemisphere of sky above (major contributing factors for Norfolk’s famed sunsets).

The skilful reproduction of cloud and sky reflected in the river Yare in Quayside view of Yarmouth is of particular note. The artist  himself stating of this  quayside view -

'I just thought the view is beautiful, but most people would walk by without a glance, as I am sure Vermeer’s contemporaries did, when walking past his view of Delft'. 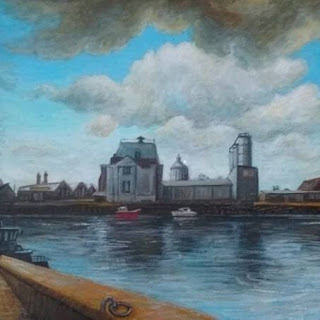 Great Yarmouth itself is no back-water in British art history. Almost every major artist of the Norwich School of Painters which flourished exactly two centuries ago has an association with Yarmouth. Many Norwich School artists visited Yarmouth in order to paint beach and marine subjects; others, such as J.S.Cotman, resided in the Town attempting to make a precarious living, other Norwich School artists such as Joseph Stannard embarked from Yarmouth in order to view major art-collections such as the ‘Golden Age’ Dutch masters on display in Amsterdam; later in his short life the tubercular Stannard was sent to Yarmouth by family and friends in hope that the salubrious sea-air would restore his health. For many years John Crome visited Yarmouth weekly as an art- teacher, he also sailed from the sea-port in order to view the art-treasures newly on display in Paris which had been plundered by Napoleon in his military victories.

Another allusion to European art-styles occurs in a painting which features two of Yarmouth's tallest landmarks, the Britannia Monument (44 metres in height) and the Atlantis Tower (56 metres in height). A naval Admiral's hat, a crane stacking container cargo, seagull and traffic cone can also be seen in this relatively small painting sized 36 x  49 cm. (Top of this post).

The Britannia Monument is a tribute to Lord Nelson (1758-1805) which was completed in 1819, some 24 years before the completion of Nelson's Column in London. The Monument shows Britannia standing atop a globe, holding an olive branch in her right hand and a trident in her left. Originally planned to mark Nelson's victory at the Battle of the Nile, its installation was delayed due to insufficient fundraising which resulted in it not being completed until after the Naval hero's death. Now surrounded by an industrial estate, Rodulfo links the monument's current environ to the settings of the paintings of Giorgio De Chirico (1888 -1978) who greatly influenced the Surrealists and whose paintings often included arcades and towers, stating- 'When thinking of monumental surrealism of course De Chirico springs to mind’. This being the primary reason why the painting references the  distinctive style of the Italian metaphysical artist.

In Yarmouth Market Place (148 x 117 cm)(below) the vibrancy of one of England's oldest and largest marketplaces is represented through swirling activity and a cheerful and pleasing tonal palette. Market produce of fruit and vegetables, flowers and clothes, along with  gangways and shoppers, are all depicted in what may be termed Rodulfo's multi-layered perspective. Gate-crashing into the picture are two seagulls, near ubiquitous to Yarmouth town, one humorous, the other slightly threatening. They also contribute to the general hustle and bustle of Yarmouth Market Place, and can be seen in various other paintings of Peter Rodulfo's wholly original Yarmouth Collection. 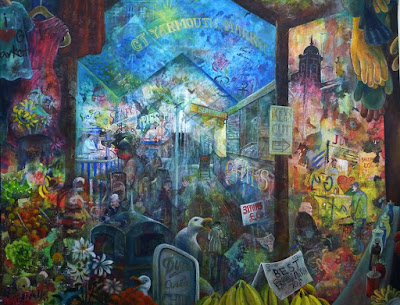 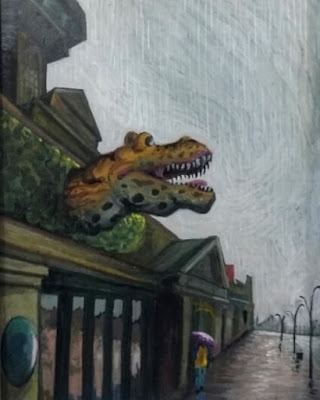