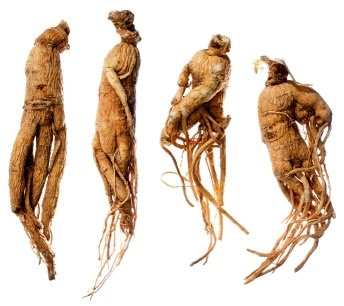 It's often imagined that the use of the root plant Ginseng in 'complementary' or 'alternative' medicine is a relatively new phenomenon, but in fact the trade and medical use of Ginseng has a long history.

There are several claims surrounding the discovery and trade of Ginseng in North America. One source states that it was found growing in Quebec in 1716 by Father Lofitau, a Jesuit Missionary to the Iroquois Indians. Another source claims that American settlers discovered Ginseng in New England in the mid 1700’s. It is known for certain however that by the late 1700's the trade in the shipment of Ginseng from America to China made considerable profit.

Perhaps because the fleshy Ginseng root is shaped resembling the body and limbs of a human, all manner of medical and 'all-healing' properties have been attributed to it. It is scientifically recognised for its anti-carcinogenic and antioxidant properties. Widely cultivated in China for centuries Ginseng is used in Chinese medicine as a muscle relaxant. As early as the 17th century one English doctor noted of Ginseng -


Deare Sonne, - You did well to observe Ginseng. All exotick rarities, especially of the east, the East India trade having encreased, are brought in England, and the profitt made therof. Of this plant Kircherus writeth in his China illustrata, pag. 178, cap. "De Exoticis China plantis".

This extremely early reference to Ginseng, highlights the deep similarity of mind shared by both seventeenth century scholars. Sir Thomas Browne established a European reputation for himself as a scientist, botanist, archaeologist and commentator upon comparative religion with the publication of his encyclopaedia Pseudodoxia Epidemica (1646-76); a work which also frequently cites, 'that eminent example of industrious Learning, Kircherus'.

The various scholastic commendations applied to Kircher as "the last Renaissance man" (Edward W. Schmidt), "a giant among seventeenth-century scholars", "one of the last thinkers who could rightfully claim all knowledge as his domain" (Alan Cutler); and perhaps most aptly of all, 'the supreme representative of Hermeticism within post-Reformation Europe' are equally applicable of Kircher's follower, Sir Thomas Browne of Norwich. As to whether either Kircher or Browne actually ever acquired or ingested Ginseng, it is not known, perhaps not!

That's a lot more than I knew about ginseng, though all my students in the 1960s swore by it. I didn't know it was found wild in the New World, for example. Most interesting.

I thank you Teegee, your comments making it rewarding to post; although I do seem to go off at a tangent, as if Ginseng is just the pretext to emphasis once more Browne and Kircher's relationship!

I really ought to consult the OED 1646 entry as well!

Ben Franklin was a big promoter of this stuff. He liked all kinds of things the colonists and Europeans were leery of---including potatoes and rice. I used to drink Ginseng tea, but kind of lost interest. The taste is somewhat bland and the effect is negligible, at least when you're used to several cups of coffee and tea a day like I am. Supposed to be good for you, though.