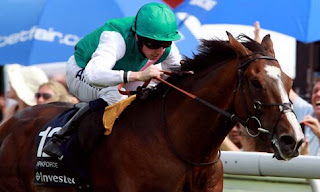 
The Prix de' l' Arc de Triomphe is the richest prize horse race in Europe. Well established as a mile and a half race, its open for horses of all ages and is staged in the last days of the Flat racing season on the first Sunday in October; the first Arc was  on Sunday October 3rd, 1920 at Longchamp outside Paris as a celebration of the newly-established era of peace following the First World War. The Arc is as much a monument  to French victory as a show-case for French horse-racing in its reputation. Top horse trainers from Ireland, France and Great Britain dream of winning this prestigious Group One race of international status.
Workforce, a 3 year-old horse which won the Derby by 7 lengths has today won the Prix de l' Arc de Triomphe. Owned by Prince Khalid Abdullah, trained by Sir Michael Stoute (his first Arc win) and ridden by Ryan Moore, Workforce is only the 6th horse to win both the English Derby and the French  Prix De l'Arc Triomphe in the same season. No horse however will ever beat the achievement of  last years Arc winner in 2009, the truly unique equestrian star, Sea the Stars.
Since the opportunity of air-travel for horses has developed horse-racing is rapidly becoming a world sport. The next big international race is the  Australian Melbourne Cup in November.

Another strong and spirited animal. And whoever photographed him understood what he was doing. Pat

Hi Nick! Great to hear from you as ever!Thanks for reminding me that Japanese horses can occasionally 'travel over' and win big races, it's v. rare but happens.

Now that's what I call an attribute of a civilized nation, a day off work for the races.

You'd have thought a sporting nation such as team UK would have a day off for the Football Final or the Derby, but no, oiling the fatigued wheels of capitalism does not permit such extravagances. In fact the UK has fewer national/bank holidays than any other nation in Europe.

More reasons for adopting the Australian approach to life!