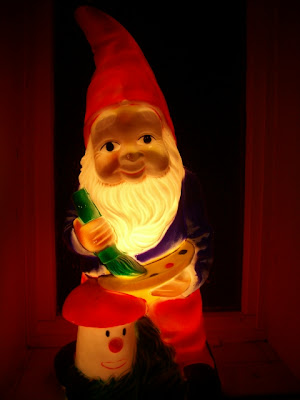 I have only this morning returned home from a  long night-flight and secret meeting to post this exclusive photograph, acquired  through a mutual business contract with Santa. Here's Vincent, the chief painter of toys for Santa. Vincent's seen  here taking a well-earned rest from his brush activity. He's quite a dedicated artist throughout the year, busy mixing colours and  painting toys  in Santa's Lapland Workshop. In fact he's looking positively well lit-up, inspired by all the lovely colours he paints on toys for children, big and small!

A Merry Christmas to one and all!
7 comments: 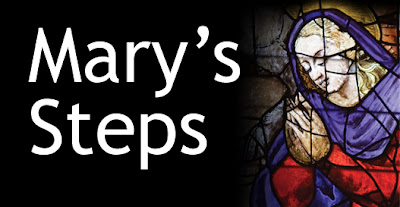 Last weekend, a rare evening's jaunt out to the theatre, a short walk to the  UEA Drama studio, located on the campus of the University  of East Anglia. The final year drama students  had staged a medieval mystery play entitled ‘Mary’s Steps’ for four nights only; the production included over 20 scenes including the Creation and Fall, the Passion of Christ and the Assumption of Mary.  Ingeniously, the play conceived by  Anthony Gash and assisted in direction by Ant Cule and Tom Francis, included several ‘Frame’ scenes in which the action focused upon a meeting between two medieval Christian mystics of the region, Margery Kempe and  Julian of Norwich. The portrayal of their quite different temperaments and approach to spiritual matters fittingly framed  the medieval mystery play.
Acted in the the round, the set was admirably configured upon the  Jungian Quaternary principle, with four entrances and exits, heaven and hell opposite each other from which  a procession of  monks, bishops, angels, Mary and Joseph, Adam and Eve, Satan and his pantomime cohorts, the Parliament of Heaven,  Christ and Pilate and personifications of the seven deadly sins among many others, occupied the central round with some fine acting.  One sensed  throughout the staging of 20 scenes that the production included a strong collaborative element amongst the cast.  The delivery of quite a difficult middle English text throughout was excellent and clear. It can’t have been easy remembering such lines as -
The twelfte is meknes that is fayre and softe. In mannnys sowle withinne and withowte: Lord, mun herte is not heyyed on lofte Nyn myn eyn be not lokynge abowte.
But in fact as the  programme notes to the production of   ‘Mary’s Step’s’ inform, the re-enactment  of what is known as the cycle of ‘N-town’ Medieval mystery plays involved research  upon quite a number of topics for its realization. These included- How to read a Church, 15th century Ecclesiastical History, Liturgy, Music, Iconography, clothing and costume, Law and Government and Domestic arrangements. Such research contributed greatly to the credibility of the production. The end result of such labours however, involving a whole term’s rehearsal was a thoroughly stimulating evening’s entertainment, the psychological intensity of the enactment of the Passion of Christ central  to the whole drama. The two girls sitting beside me were suitably shocked and squeamish at the graphic physicality of  blood  and violence as hammer and nails were used  in the crucifixion scene. But there was also puppetry, acrobatics and humour interspersed throughout the performance.


There were also several moving passages of music, sung well if self-consciously; at times one wished for stronger accompaniment of either whistle or harp  to add colour and support, but still  a fine selection of polyphonic music, one can’t go  too wrong with  the music of von Bingen and Desprez.

But in essence the final year  UEA drama students achieved  their goal,  none other than the restoration of an important piece of East Anglian cultural history no less, a  pageant  of theological tableaux not without humour, but equally informative upon the didactic entertainment  of the Medieval age, which held their audience  enthralled as much now as during the Middle Ages. It may be quite some time before the resources and inclination are available for another scholarly  re-enactment of a medieval mystery play  in Norwich. 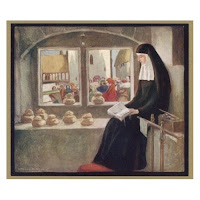 In addition to the  enactment of a  medieval passion play, ‘Mary’s Steps’  included  a portrayal of Julian of Norwich (c. 1342 – 1416).  The fame of Julian of Norwich continues to grow world-wide, ever since T.S.Eliot quoted her in his poem 'Little Gidding' the fourth of his  four quartets.  It has now become an introductory commonplace to trot out the fact that she is the first woman to be identified as such, to write in the English language. Julian's ‘Revelations of Divine Love’  a recording of her ‘showing’  of the Passion of Christ, and reflection upon the meaning of her revelations, are a spiritual classic and one of the most up-beat  statements about  God’s loving-kindness. There are at least three increasing well-known texts by Julian which are frequently quoted. The exacting research of the  production  of ‘Mary’s Steps’  pinpointed Julian’s description of the human condition neatly in her parable of a lord and his servant (chapter 51 Long text). Julian's hazel-nut vision can never be quoted too often -
At the same time, our Lord showed me a spiritual vision of his familiar love. I saw that for us he is everything that we find good and comforting......In this vision he also showed a little thing, the size of a hazel-nut in the palm of my hand, and it was as round as any ball. I looked at it and thought, 'What can this be?' And the answer came to me, 'It is all that is made.' I wondered how it could last, for it was so small I thought it might suddenly disappear. And the answer in my mind was,'It lasts and will last forever because God loves it; and in the same way everything exists through the love of God'.
The contrast between Margery Kempe’s at times gushy spirituality  with Julian’s quiet, inner mystical visions was neatly marked in ‘Mary’s Steps’; it was an inspired idea to place  Margery Kempe amongst the audience, as heart-on-her sleeve, she  melodramatically  responded to  the enactment of the Passion of Christ. ‘Mary’s Steps’ concluded with Julian’s  meditation upon her famous words  -'All shall be well'; here's a  fuller  quote  from chapter 27 -


And because of the tender love which our good Lord feels for all who shall be saved, he  supports us willingly and sweetly, meaning this: 'It is true that sin is the cause of all this suffering, but all shall be well, and all shall be well,  and all manner of things shall be well. These words were said very tenderly, with no suggestion that I or anyone who will be saved was being blamed. It would therefore be very strange to blame or wonder at God because of my sin, since he does not blame me for sinning.


The whole performance  of 'Mary's Steps' lasted  almost 3 hours, so a big well-done to all involved in such a  marathon production which never remotely  flagged. The cheers of relief back-stage were also a joy to hear! 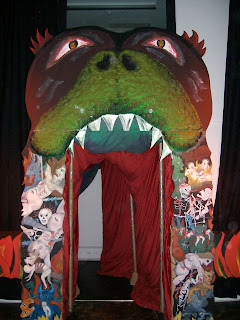 It was amusing to see that in order to leave the studio and re-enter the world  the audience had to walk through the dog’s mouth entrance to Hell!

Postscript:
To be honest I often have mixed feelings about my old alma mater, as one of the last new Universities to be built UEA is a mere 50 years old, against a backdrop of a City over one thousand years old . Because the University's  fragile identity felt the need to  ‘borrow’ the city’s motto for its own (Do different) without adopting the City’s place-name I feel, as a half-century resident Norvicensian, a need to  speak out here.  Recent events  have not always seen the UEA  make a  positive contribution towards the reputation of the City.  Town and gown’s relationship remains very poor  because UEA’s recent ‘doing different’ has included a  rapid succession of short-stay vice-chancellors, the reputation of the School of climatic research exposed under world-media scrutiny and now a lecturer in Law convicted and imprisoned; UEA's lack of direction will hopefully be stabilized  in developing a medical teaching relationship  with the nearby University Hospital. Must do better!
It’s very important to remember however  that this catalogue  of failures  is  solely the fault of the academic institute itself and not the fault of  its students whatsoever.
In the same week as the debate and vote upon whether student tuition fees should be hiked up, effectively pulling the draw-bridge up for access to higher education for many, here was a  university theatrical production which in its own modest way restored an important piece of cultural history to the region. It’s not exactly rocket-science to understand the importance of such artistic projects to society as a whole.  But again this is more to do with the talent of students than the  knee-jerking  compliance of academic institutions to Government directives. Sometimes those controlling the purse-strings  of finance know the price of everything and the value of nothing.
Link to   photo's of costume rehearsal
Here's a link to the excellent website dedicated to Julian, maintained by Julia Bolton Holloway Julian of Norwich website Near the end of the sixth book of Browne's Pseudodoxia Epidemica there's a good portrait of  the worthy 17th century Norwich physician engaged upon his essentially Baconian  quest.

At the  conclusion of a chapter entitled A further digression upon blackness there is evidence of the refinement of Browne's senses and  his appreciation of beauty. In  chapter 12 of book  6 Browne alludes to one of his numerous chymical experiments. Several paragraphs are devoted to the use and effects of  various acids and vitriol, the causes of blackness in nature and speculation upon  its causes and origins in human skin.

The study of optics was also of particular interest to Browne and optical imagery  frequently occurs in  his writings. One strongly suspects his use of the word irradiation, ' to shine brightly' (the near synonymous iridescence is later in origin, 18th century from iris, rainbow) to describe the well-known optical effect when viewing a peacock's feather, is one of Browne's many medical-scientific neologisms. These include the words medical, pathology, hallucination, electricity and ambidextrous, as the complete Oxford English dictionary testifies.

In a tone of near mystical apprehension and barely suppressed joy, Browne concludes his scientific investigations upon blackness, waxing lyrical upon  the beauty of colour thus-.

And this is also apparent in Chymical preparations. So Cinaber becomes red by the acide exhalation of sulphur, which otherwise presents a pure and niveous white. So spirits of Salt upon a blew paper make an orient red. So Tartar or vitriol upon an infusion of violets affords a delightfull crimson. Thus it is wonderful what variety of colours the spirits of Saltpeter, and especially, if they be kept in a glass while they pierce the sides thereof; I say, what Orient greens they will project: from the like spirits in the earth the plants thereof perhaps acquire their verdure. And from such salary irradiations may those wondrous varieties arise, which are observable in Animals, as Mallards heads, and Peacocks feathers, receiving intention or alteration according as they are presented unto the light. Thus Saltpeter, Ammoniack and Mineral Spirits emit delectable and various colours; and common Aqua fortis will in some green and narrow mouthed glasses, about the verges thereof, send forth a deep and Gentianella blew. 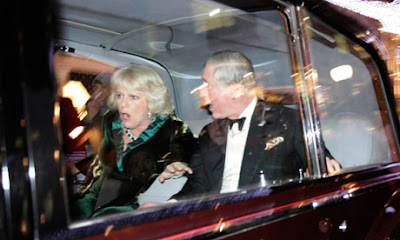 While on the way to the theatre  a real-life drama occurs. The staggering ineptitude of Royal security to just cruise into a volatile environment  oblivious to potential danger is what amazes one most. A defining image of a dreadful year, even though it looks as if posed for a 1970's album cover.
3 comments: