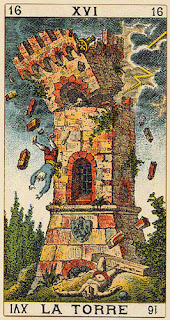 The Tarot card of the Tower seems a highly symbolic and appropriate depiction of contemporary world-events, not only of the unrest and challenge against incumbent governments throughout North Africa, but also of the sudden change of fortune experienced by many today. The card depicts a tower struck by lightning with two figures falling headlong from it.

It’s probably best to state at the very outset that personally I give little credence whatsoever to any fortune-telling aspect of Tarot cards, all such methods of divination of individual destiny being prone to highly subjective interpretation; but its also worth reminding those who condemn any form of occult divination that the foremost book which has shaped the Western psyche for millennia, namely the Bible, has itself been used as a source of divination in the form of bibliomancy, that is, the casual choosing of  a  verse from a randomly opened Bible to be heeded as God-given advice upon a situation.

The Tarot is believed to have originated from Northern Italy, a hand-painted Tarot pack was created for the Duke of Milan in 1415. Sometimes believed to contain the wisdom of the mythic ancient Egyptian god Thoth-Hermes, Tarot cards have fascinated and intrigued many minds throughout history. Even the eminent 20th century psychologist Carl Jung, after attending a lecture upon Tarot cards was open-minded enough to confess that-

'It seems as if the set of pictures in the Tarot cards were distantly descended from the archetypes of transformation'.  (CW 9 i:81)

It’s in this context, as  pictorial representations of  archetypes, that the  cards of the Tarot are of particular  psychological interest.

Mention of towers can be found throughout the Old Testament; frequently alluded to in the form of a fortified frontier post or watch-tower for vine-yards. More importantly, the tower in the Bible often symbolizes  an impregnable stronghold in which to place one’s trust in God.

For thou hast been a shelter for me, and a strong tower from the enemy.
-Psalm 61 v. 3

But occasionally  the tower in the Bible is likened to the human body, especially in the love poetry of Solomon’s Song –

The symbolism of the tower card in the Tarot may originate  from the Biblical Fall of Man, or more aptly, to the tower of Babylon which was destroyed by God as punishment for Man’s overweening pride (Genesis 11). In modern times the symbolism of a tower struck suddenly by lightning holds a peculiar resonance to the devastating trauma of the 9/11  attack upon the twin towers of the World Trade Centre.

There are a number of interpretations relating to the Tarot  card of the Tower but most conform to a standard meaning. These include - Chaos, Sudden change, Hard times, Crisis, Revelation, Disruption, Realizing the truth, Disillusion, Uncomfortable experience, Downfall, Ruin, Ego blow,  Explosive transformation, failure and catastrophe.

Other interpretations of this flexible and inevitably inexhaustible symbol include the paradigms constructed by the ego and the sum total of all schemata which the mind constructs to understand the universe. Frequently a symbol of ascent heavenwards, as in the Babylonian tower, the Tower is struck by lightning when reality does not conform to expectation. Another interpretative insight of the Tower card is the war between the structures of lies and the lightning flash of truth, in which, ‘false concepts, beliefs and institutions come tumbling down, suddenly, violently and all at once resulting in being blinded by a shocking revelation'. It sometimes takes a devastating  lightning strike to see a truth that one refuses to see. Such  cataclysmic activity is sometimes necessary for real change and growth.

Yet another highly relevant interpretation of this enigmatic, yet archetypal card is that it symbolizes hard times, sudden change, crisis and ruin, a trauma experienced by many individual lives at present.

*  *  *   *  *   *
Highly  Recommended reading-
Meditations on the Tarot : A journey into Christian Hermeticism
by Anon, Element  1985
(Although the author is stated as anon, the Russian theosophist,
Valentin Tomberg is considered to be the author).
5 comments: 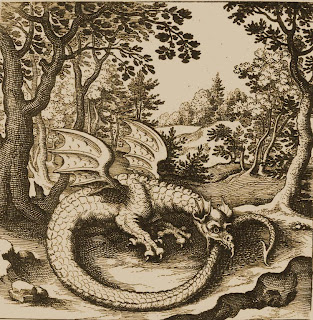 The city of  Norwich UK  hosts its second-ever Dragon Festival from 12th - 27th February. Norwich’s association with the fabled, mythic beast is strong and images of dragons  in either carving, stained-glass or wood sculpture can be found throughout the City, often in its fine medieval buildings.

There has been from time immemorial, on Mayor’s Day at Norwich, an annual pageant, the sole remnant of St. George's guild, in which an immense dragon, horrible to view, with hydra head, and gaping jaws and wings, and scales bedecked in gold and green, is carried about by a luckless wight, whose task it is, the live-long-day, by string and pulley from within to open and shut the monster's jaws, by way of levying contributions on the gaping multitude, especially of youthful gazers, with whom it is matter of half terror, half joy, to pop a half-penny into the opened mouth of SNAP, (so is he called) whose bow of thanks, with long and forked tail high waved in air, acknowledges the gift. Throughout the rest of the year, fell Snap lives on the forage of that memorable day: quietly reposing in the hall of his conqueror's sainted brother, St. Andrew, where the civic feast is held.

The association of the dragon with England's Saint George was developed throughout the middle Ages. The story of Saint George slaying the dragon does not describe an historical event, but is symbolic of the victory of St. George, the embodiment of Christian faith, over evil and the forces of the devil, the enemy of God, the dragon. As a patriotic symbol of national pride and power, George and the dragon became synonymous with the forces of good versus evil and the triumph of England over her enemies. But in fact the dragon and its complex, archaic symbolism can  be found throughout World-cultures. 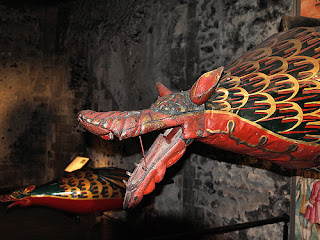 In ancient Egypt Pharaoh was assimilated to the God Re, the conqueror of the dragon Apophysis. The dragon Marduk in the Babylonian creation myth was the tutelary god of ancient Babylon. Depicted as a composite creature  Marduk had a head and tail of a serpent, the body and fore-legs of a lion and hind legs of a falcon. In Judaic tradition the pagan kings were represented in the likeness of a dragon, such is the Nebuchadnezzar described by Jeremiah and the Pompey in the Psalms of  Solomon. In Chinese mythology the dragon represents the east, sunrise, spring and fertility. Long Wang, the dragon kings who were responsible for rain were also gods of rivers, lakes and oceans who protected ferryman and water-bearers. In many cultures, including China, the dragon  is a celestial symbol of the life-force and the power of manifestation.

The roots of the word dragon originate from the Greek drakon meaning a serpent. The eminent scholar of comparative religion, Mircea Eliade succinctly defines the interconnection of dragon/serpent/snake symbolism thus-

The dragon is the paradigmatic figure of the marine monster, of the primordial snake, symbol of the cosmic waters, of darkness, night, and death – in short, of the amorphous and virtual, of everything that has not acquired a form.

Though today the dragon is now reduced to commercial fantasy and heritage promotion status,  in the seventeenth century the Norwich philosopher Sir Thomas Browne was aware of the extensive symbolism associated with  dragons. Browne was a scholar of comparative religion who, not only devoted a short chapter upon the history of the George and the Dragon myth  in his Pseudodoxia Epidemica, (Bk.5 chapter 17) but also possessed  books in which alchemical  symbolism  associated with the dragon was developed.

In Martin Ruland's Lexicon Alchemiae (Frankfurt,1612) for example, once upon the groaning shelves of Browne’s vast private library, the magic powers of a stone acquired from the dragon are recorded. The psychologist Carl Jung, referring to Ruland's Dictionary explains-

This stone was known to Pliny and to medieval alchemists, who named it dracnites, or drachetes. It was reputed to be a precious stone, which could be obtained by cutting off the head of a sleeping dragon.. But it becomes a gem only when a bit of the dragon's soul remains inside, and this is the "hate of the monster as it feels itself dying." ...Even though there are no dragons nowadays, these draconites are occasionally found in the heads of water-snakes. Ruland asserts that he has seen such stones, blue or black in colour.  Vol. 9 ii 214

During the twentieth century Jung wrote extensively upon the dragon's varied symbolic attributes, including its being chained to the underworld, its many-eyes, its wings, ever-wakefulness, fire-spitting, poison and tail-eating. In fact a bewildering number of references, often of a seemingly contradictory nature in the dragon's symbolism can be found in Jung's writings. Importantly however, Jung knew of the dragon's intimate relationship to alchemy, for the tail-eating dragon, or Ouroboros or mercurial serpent it became a major emblem of the alchemical art itself. In Alchemy and Religion Jung speculates-


They are personified by the serpens mercurii, the dragon that creates and destroys itself and represents the prima materia. This fundamental idea of alchemy points back to the Tehom, to Tiamat with her dragon attribute, and thus to the primordial matriarchal world which, in the theomachy of the Marduk myth, was overthrown by the masculine world of the father. The historical shift in the world's consciousness towards the masculine is compensated by the chthonic  femininity of the unconscious.  - CW 12:26

Its great that the Norwich Dragon Festival is back by popular demand in 2014.  The  events held in Norwich during the next two weeks - predominantly those of an educational, arts and crafts, children-orientated theme, help promote awareness of this mythic creature and the City’s cultural heritage. But expect no learned lectures upon the chthonic origins of the dragon, or its powerful role in esoteric symbolism. However, the consequences of the present-day socio-economic climate for many in the UK, indeed for many of the wider world, may be described as being in combat against the dragon.