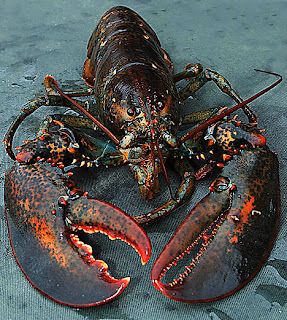 'Lobsters in great number about Sheringham and Cromer from whence all the country is supplied.'
Sir Thomas Browne was a  significant  natural historian so it's not too surprising that The Project Gutenberg EBook has recently  reproduced his  'Notes and Letters on the Natural History of Norfolk'.
First published in 1902 by Jarrolds of London, Browne's 'Notes and Letters upon the Natural History of Norfolk more especially on the birds and fishes', is a valuable document  inasmuch as it provides evidence not only of Browne's  keen-sighted observations  and  his willingness to assist  the ornithologist Christopher Merritt, but also to the abundance and decline throughout the intervening centuries of particular species in Norfolk. However, those expecting to read highly-stylized 'vast undulations of sound' as exemplified in  the poetic Discourses of 1658 will be sorely disappointed, for it is Browne at his most scientific  note-book prose encountered in his natural history notes.
The county of Norfolk is described by Browne as having a 'great number of rivers, rivulets & plashes of water', elsewhere in his notes he writes of its 'broad waters' which may well be from where the term 'Norfolk Broads' originates. I've written before upon Browne as an ornithologist here's the link.
Thomas Southwell in the 1902  introduction to Browne's notes, 'emphasises the originality which pervades all  Browne's observations, a characteristic so conspicuously absent in the work of most of his predecessors'.

Willows on the Wensum 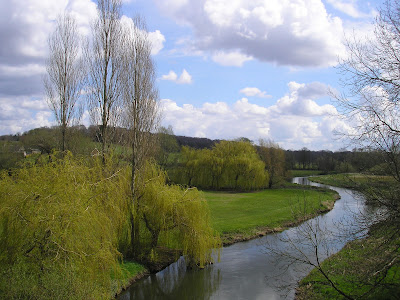 Now spring has finally arrived there are some very  green and scenic views near to home. The ancient and senile river Wensum winds slowly through Norfolk entering Norwich just a mile or two from my door-step.
4 comments: 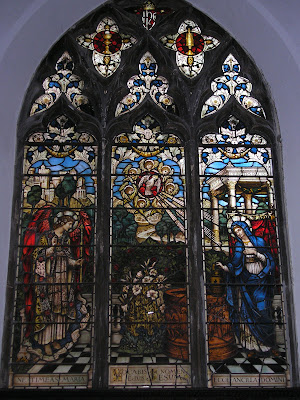 I'm lucky to spend time at present as a volunteer at the church of Saint John Maddermarket. Now that the tourist season is under-way I get to meet visitors from all over the world. The window in the North chapel depicts the Annunciation and was designed by James Powell & Sons. It was donated by  parishioners of the church and cost £165 in 1913. Many visitors to the church of  Saint John Maddermarket  have commented on its pre-Raphaelite style, and it's arguably the most popular stained-glass window in the church.  The centre panel depicts lilies, emblematic of the Virgin Mary. On the well which Mary stands beside there can be seen two scenes from Genesis, the Garden of Eden and Adam and Eve's expulsion from paradise on the right, the scene thus sharply contrasts Eve's disobedience to Mary's obedience.

I'm technically a little late posting this because March 25th  is the date of the church festival  commemorating Lady Day and the Annunciation in the ecclesiastical calender.

But of all the many beautiful religious artifacts located in Saint John Maddermarket my favourite remains the utterly fascinating  Layer Monument.
No comments: