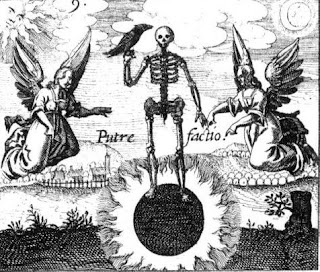 C.G. Jung identified the 17th century as the era of alchemy's last and greatest flowering.  And indeed, many noble flowers from the garden of alchemy including lavishly illustrated art-works, ornate in their imagery, accompanied by extraordinary dense texts which elaborate upon 'Celestial Agriculture', germinated and bloomed during the 17th century.

It was also during the 17th century that the slow, but decisive, fissure and schism between Science and Faith opened up; the new man-made truths in astronomy, anatomy and physics unearthed by the enquirers and advocates of the 'New Learning', embryonic scientists no less, eventually challenged and competed for dominance in intellectual supremacy over the God-given Cosmology and the eternal  truths of Christianity.

The 17th century, often described as the last great age of religious Faith and private devotion, was also an era of specific interest to C.G. Jung. According to the Swiss physician in his autobiography Memories, Dreams, Reflections, his many years study of alchemy were inaugurated by a dream in which he visited a large Ducal Palace situated somewhere in Northern Italy. While exploring the palace's vast chambers, he heard in his dream, its heavy doors slamming shut. Jung interpreted his portentous dream as signifying he was now 'trapped' in the 17th century, his confinement signified he believed, a long study of alchemical literature originating from the baroque century, until somehow set free.

C.G.Jung recognised that the single profession which engaged in the art of alchemy were physicians. These alchemist-physicians, invariably of a Protestant background, many of German or English background were often cautiously sympathetic to the new 'chemical' medicine of Paracelsus. They used distinctly apt symbols closely related to their profession, notably from anatomy, optics and astronomy to discourse upon their sometimes unorthodox, and even near-heretical, spiritually-orientated studies.

Included among the treasures of seventeenth century alchemical art are a series of illustrations rich in symbolism entitled Philosophia reformata (1622) by the German author Johann Daniel Mylius (c.1535-1642) who wrote on medicine and alchemy. Emblem 9 in Mylius's sequence of 28 illustrations is entitled Putrefactio (above). It is described thus - 'On the top of a flaming black globe stands a skeleton holding a black crow in its right hand. On each side of him there is a winged angel, both of which point to the black globe. In the heavens above, the Sun and the Moon are visible. In the lower foreground can be seen a regenerating tree stump'.

The skeleton and the skull are frequently encountered in Christian and alchemical art symbolism. They retain a vestige of their numinous content as reminders of mortality and Death.

A belief in angels was once a vital entity of spiritual belief. Many people, educated and illiterate, throughout 17th century Europe fervently believed in both angel and witchcraft. Angel's roles include that of musician and  psychopomp, most often they are depicted as celestial messengers.

The Rotundum is a symbol frequently encountered in alchemical imagery, as are the crowded perches and aviaries associated with bird symbolism in alchemy; a feathered assembly of swans, ostriches, doves, eagles, vultures and pelicans flock the pages of alchemical art. The blackbird, crow and raven are each associated with the Nigredeo stage as is the operation of Putrefactio, along with the variant stages of Mortificato and Calcinato.

Whether Thomas Browne as a young medical student studying abroad circa 1627-1630 ever perused the books of the German alchemist-physician J.D. Mylius isn't known, nor is there any recorded evidence of J.D. Mylius's books being listed in the 1711 Sales Auction catalogue of Browne's library. However, several decades after completing his three years medical study on mainland Europe, Browne made what is credited as his single scientific discovery.

Its a discovery which is utterly characteristic of his era, when human life was often precarious and short for many from the ravages of Civil War, plague and disease and utterly compatible to the dark Nigredo contemplations of Urn -Burial. Browne augments his solemn funerary threnody adding to the heaped pyre of images and symbols, a short, but detailed description of his medico-scientific discovery.

Browne's observation on the effects of Putreficato and the formation of the waxy substance which coagulates upon body fat, known as adipocere, can be found in chapter 3 of Urn-Burial, a work which has been described as 'reeking of the Grave'.
In a Hydropicall body ten years buried in a Church-yard, we met with a fat concretion, where the nitre of the Earth, and the salt and lixivious liquor of the body, had coagulated large lumps of fat, into the consistence of the hardest castile-soap: wherof part remaineth with us.

More than one scientific observation can be found in Urn-Burial along with several archaeological hypotheses, there's even a far-sighted prediction of future forensic science in the Discourse in the proposal that - Physiognomy outlives our lives, and ends not in our graves. And upon more than one occasion the Norwich-based early scientist concludes his observations with the remark, 'whereof part remaineth with us'!


Scientific investigation lay at the core of Browne's study of nature which included equally the visible and the invisible in human nature, the corporeal body and the psyche.  In many way Pseudodoxia is Browne's logbook of his investigations. It was a best-seller in its day,  and an early work of scientific work-in-progress journalism; it was also the vehicle whereby Browne introduced many neologisms into English language, new words necessary for a preciser medico-scientific terminology, such as 'electrical' and 'hallucination' for example; Paradoxically to modern sensibilities, Browne not only conducted numerous experiments in his 'elaboratory', many of which are recorded in Pseudodoxia Epidemica, but also engaged in exercises of a somewhat unusual nature, such as - suspending a magnet above an alphabetical circular table and speculating upon whether its possible to communicate with angels.

However it's in Religio Medici that one encounter's a vivid depiction of the alchemist-physician in the 'elaboratory' engaged in experiment involving both material substance and psychic phenomena. Forging together imagery from both the Christian tradition and the western alchemical  tradition, Browne declares-

'I have often beheld as a miracle, that artificial resurrection and revivification of Mercury, how being mortified into thousand shapes it assumes again its own, and returns into its numerical self'. [2]

This single sentence from Religio Medici testifies to Browne engaging in alchemical experiment.

The properties of Mercury, also known as Quicksilver or living silver fascinated many alchemists. Among its numerous attributes, Mercury in the mind of the seventeenth century alchemist-physician was associated with several attributes. He was believed to be a psychopomp, a messenger to the gods of antiquity and also the 'soul-guide' to the questing alchemist - it was also a name associated with the Egyptian god Thoth, inventor of number and alphabet, as well as the name of a mysterious liquid-metal.

Because it was a metal seemingly able to shrink and expand in form Mercury was believed to possess  'magical' properties. With its many correspondences in the realms of arcane lore, nature, mythology and early chemistry it is little wonder that Mercury in it's shape-shifting symbolism, acted as a  kind of highly charged psychic play-dough upon the imagination of  followers of the  'Mercurial Art'. The antinomian, or contradictory nature of Mercurius is reflected in his being called duplex, of two natures, likened as male and female, heaven and earth, mother and father, young and old, strong and weak.

Jung says of Mercurius - "In comparison with the purity and unity of the Christ symbol, Mercurius-lapis is ambiguous, dark, paradoxical, and thoroughly pagan. ... The paradoxical nature of Mercurius reflects an important aspect of the self - the fact, namely, that it is essentially a complexio oppositorum, and indeed can be nothing else if it is to represent any kind of totality." and "The magic of his name enables him, in spite of his ambiguity and duplicity, to keep outside the split, for as an ancient pagan god he possesses a natural undividedness which is impervious to logical and moral contradictions. This gives him invulnerability and incorruptibility, the very qualities we so urgently need to heal the split in ourselves."  [2]

Browne's declaration on Mercury is testament to his wittingly or unwittingly experiencing projection, that is, observing both the transmuting of a substance and crucially, simultaneously recognition of the active workings of the unconscious. Such projecting onto organic matter was experienced by the alchemist as revelatory, or of miraculous significance. Browne's likening of Mercury's properties of revivification to 'artificial Resurrection'  - alluding to Christ's Resurrection, is clear evidence that the alchemical opus with it's many trials, tribulations and set-backs, was seen a work of redemption, and a necessary augmentation to the adept's faith.

Strictly speaking, projection is never made; it is simply there. In the darkness of anything external to me I find, without recognising it as such, an interio or psychic life that is my own.....The alchemist did not practise his art because he believed on theoretical grounds in correspondence; the point is that he had a theory of correspondence because he experienced the presence of pre-existing ideas in physical matter. I am therefore inclined to assume that the real root of alchemy is to be sought less in philosophical doctrines than in the projections of individual investigators. I mean by this that while working on his chemical experiments  the operator had certain psychic experiences which appeared to him as the particular behaviour of the chemical process. Since it was a question of projection, he was naturally unconscious of the fact that the experience had nothing to do with matter itself ( that is, with matter as we know it today). He experienced his projection  as a  property of matter; but what he was in reality experiencing was his own unconscious. In this way he recapitulated the whole history of man's knowledge of nature. As we all know, science began with the stars, and mankind discovered in them the dominants of the unconscious, the "gods" as well as the curious psychological qualities of the zodiac: a complete projected theory of human character. Astrology is a primordal experience similar to alchemy. Such projections repeat themselves whenever man tries to explore an empty darkness and involuntary fillls it with living form. [3] 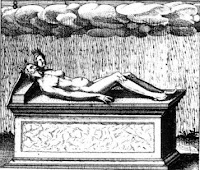 In another series of emblems by J.D.Mylius, the Royal pair are rising from the grave of putrefacation and cleansed of their blackness by a heavenly dew.

The text accompanying the 17th century work Donum Dei (above) speaks of Putrefactio as - 'when you see the blackness delight, for it is the beginning of the work'. During the process -'the formation of a black, stinking earth, its dissolution into the mercurial "philosophers' oil", the first whitening and the appearance of many colours' occurs.

Yes, if I understand well, Browne was balanced between his interest in the books of his age and his medicine and his faith.