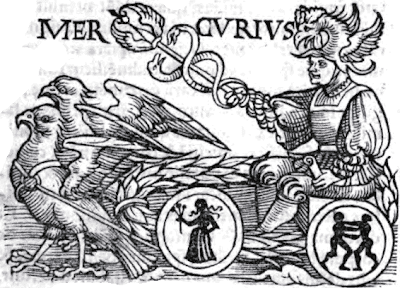 It's always exciting whenever identifying an esoteric book hitherto undetected in Sir Thomas Browne's library, especially when the opportunity arises to share an image which the physician-philosopher once cast his eye upon. This fantastic medieval illustration of Mercurius with his caduceus and chariot wheels depicting the zodiac signs of Virgo and Gemini is from the astrologer/astronomer Guido Bonati's De Astronomia.[1].

According to the Wikipedia entry Guido Bonati of Forli, Italy (d. circa 1300) was the most celebrated astrologer in Europe in his century. His book De Astronomia, written around 1277 was reputedly the most important astrological work produced in Latin in the 13th century. Bonati's mentioned in Dante's Inferno Canto 20 line 118.

There seems to be some ambiguity over how his name is spelled, both Bonati and Bonatti occurring in sources. The entry in the 1711 Sales Catalogue of Browne's library states Bonati, however Dante writes of him as Bonatti. Either way, it's yet more evidence of Browne's predilection towards the reading and study of esoterica as the Wikipedia list of  esoteric books in Browne's library  highlights. 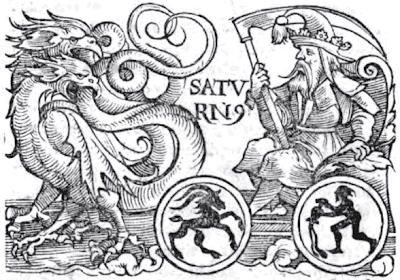 Another illustration from the 1550 Bonati edition owned by Browne. The counterpart of Mercurius in alchemy is Saturnus ruler of Capricorn and Aquarius depicted here upon his chariot wheels. Note how each planetary chariot is towed by quite different creatures. Saturnus holds a scythe symbolic of his links to agriculture and a remnant of  his association to Father Time who appears on New Year's Eve.

These are interesting 16th-century scholarly woodcut evocations of the zodiac. I just noticed that Saturn's chariot is drawn by dragons (or eagle-griffins) that are biting their own tails. There is a huge literature about that motif (yes, having to do with notions of cyclic concepts) going back to Scythian art, whence transmitted both west and east. It's a half century since I read about it, but you probably know it by heart, anyway.

Hi TeeGee, No I did not know about the Uroboros's relationship to Sythian art, so not quite knowing to heart and I seriously doubt if I remember anything whatsoever studied from half a century ago. Dated from 1550 which seems to be a peak epoch in esoteric matters, I forgot to mention they were woodcuts, while looking at the recent post on Laura Nyro which has now had over 800 USA views I realise I have not said anything really at all about the subject matter of her singing !

We're getting the 2011 retrospective series of David Attenborough, and as I watched him talking about the elephant bird, as it was called (http://www.buzzle.com/editorials/8-17-2004-57992.asp)—I realized that the woodcuts earlier than Bonani, but not much, could have helped inspire Saturn's team (even though they didn't have reptile tails), since the tallest of all birds ever anywhere might not have been very long extinct. There are images also at the other Google links.

Thank you for bringing this to our attention. The implications are incredible and is continuing support of a theory which claims a secret or hidden knowledge of past and future geological events of significance can be determined by the postions of stars and planets and is often presented to us in the form of stories and artwork. The notable symbolism here is the dragon-like creature (fire) & the scythe (harvest). This is indicative of and relates to what most modern scholars believe to be an impossible fiery apocolyptic event which is predicted to take place during the Age of Aquarius. I could go on but I would be divulging in information I am not yet willing to share.