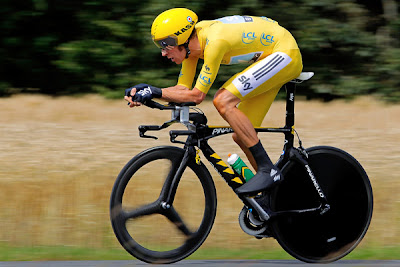 For the first time ever in  its 99 year history, a Briton wins the  Le Tour de France. The history of the gruelling cycle race, first staged in 1903 is peppered with scandals, drugs, cheating, violence, strikes and bizarre occurrences, but nevertheless the 3 week 2000 mile race held in France remains one of the ultimate challenges of all endurance sports.

It's a tradition on the last day of the race that the leader is unchallenged, so barring an accident British cyclist Bradley Wiggins is guaranteed to triumph in Paris today.

Postscript August 1: Bradley Wiggins wins his seventh gold at the Olympics for GB in the time trial event. 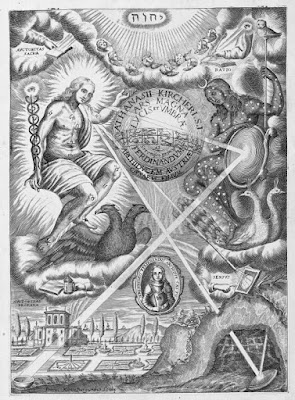 The 1711 catalogue of the library of Sir Thomas Browne indicates that the German Jesuit polymath Athanasius Kircher was one of the physician-philosopher's favourite authors. The subject-matter of Kircher’s many books - optics, alchemy, comparative religion, antiquities, the unusual and even down-right bizarre to modern sensibilities, reflect several shared interests and a close perspective in outlook between two of the seventeenth century's greatest polymaths.

Athanasius Kircher’s books are well-represented in Thomas Browne's library, including his optical work Ars Magna Lucis et Umbrae (1646) whose frontispiece is above. Kircher’s The Great Art of Light and Shadow was in all probability, one of the earliest of books purchased by Browne since commencing his residency in  after the physician-philosopher's marriage in 1642. Published the same year as Browne’s encyclopedic endeavour to promote scientific understanding, Pseudodoxia Epidemica first saw light during the endgame of the English civil war in 1646. Further revised editions of Browne's major contribution to the scientific revolution appeared until the last edition in 1672.

The frontispiece of Kircher's The Great Art of Light and Shadow depicts a personification of the sun, with the symbols of the zodiac covering his body, below him sits a double-headed eagle. On the right,  a woman as a personification of the moon and covered in stars, below her sits two peacocks. Rays of light hit various lenses which reflects Kircher's optical discoveries. The frontispiece (above) also depicts Kircher's sources of knowledge in descending order of clarity: sacred authority, reason, sense (aided by instruments) and profane authority. Browne in his Pseudodoxia lists authority, experience and reason as his primary sources of knowledge.

Kircher discovered that by placing a lens between a screen and a mirror which had been written on, a sharp but inverted image would appear on the screen. Using a spherical water-filled flask as a condenser to concentrate the light. Images and texts painted on the mirror's surface could be projected by light from a candle after dark. These optical demonstrations eventually resulted in the birth of the magic lantern, an invention which is sometimes attributed to Kircher.

A near exact contemporary of  Thomas Browne (1605-82) Athanasius Kircher (1601-1680) has been described as ‘the supreme representative of Hermeticism within post-Reformation Europe’. Although now known to have been often mistaken in many of his theories, especially in comparative religion, Kircher, like Browne in his Pseudodoxia Epidemica disseminated and popularized much new scientific knowledge, including recent discoveries confirmable to amateur scientists in the field  of optics and magneticism. Browne  devoted several chapters on his own experiments in  magneticism and static electricity  in Book 2 of Pseudodoxia Epidemica .

Kircher studied philosophy, mathematics, Greek and Hebrew, as did Browne. But above all else he shared with Browne a deep interest in comparative religion and the esoteric. Browne even respecting Kircher’s knowledge in the field of comparative religion enough to describe him as -   'that eminent example of industrious Learning, Kircherus'.

Kircher believed that Egyptian paganism was the fount of virtually all other beliefs and creeds whether Greek, Roman, Hebrew, Chaldean or even Indian, Japanese, Aztec and Inca. His  three jumbo-sized volumes of perceived syncreticism in comparative religion Oedipus Egypticus ( 1652-56) of over 2000 pages are a land-mark in printing and esoterica. Given the fact that many books of western esoterica are listed as once owned by Browne it’s not too surprising that Kircher’s vast work Oedipus Egypticus was once in his library. The Norwich-based physician-philosopher alluded to the Bembine Tablet of which is reproduced by Athanasius Kircher in Oedipus Egypticus  in his own work of Hermetic phantasmagoria  The Garden of Cyrus (1658).

In addition to being scholars of science and esoterica Kircher and Browne were also extremely interested in  accounts of far-way lands such as . This is reflected in fact that the latest  reports from traveller’s, mostly missionaries returning to Rome from China, were collected and compiled by Kircher in his China Illustrata  (Amsterdam 1667). Although the earliest mention of the Chinese root-vegetable ginseng occurs in the Oxford English dictionary dated 1654, Sir Thomas Browne remembered the first detailed description of the root-vegetable Ginseng from his reading of Kircher's China Illustrata in a letter dated April 2nd 1679 to Edward Browne -

Deare Sonne, -You did well to observe Ginseng. All exotick rarities, especially of the East , the East India trade having encreased, are brought in England, and the profitt made thereof. Of this plant Kircherus writeth in his China illustrata, pag. 178, cap. "De Exoticis China plantis". 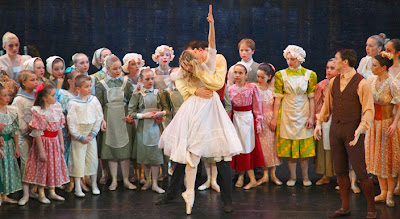 On Friday evening I attended a performance by English Youth Ballet of Giselle at the Theatre Royale, Norwich. With a cast of over 100 young people the EYB is the only company which travels regionally throughout the United Kingdom to stage 8 full scale ballets annually. The company is augmented by 6 professional dancers in principal roles.

Artistic director Janet Lewis’s  up-dated version of Giselle  is set in early 1900's England, the class division between aristocracy and peasant emphasized by an 'upstairs-downstairs' theme which is highlighted in costume. Other notable differences in the EYB's inspired interpretation include the principal character of Giselle having a paternal ward instead of a maternal widow, the addition of other music by Adolphe Adam and quite naturally given the company’s youth, the omission of a Bacchanalian celebration.

In the Janet Lewis and EYB production of the ballet Giselle the opportunity to showcase all the members of its company occurs, including its very youngest members.  It can be no easy logistical exercise to orchestrate in rehearsal and performance over 100 dancers ranging from the tender age of 8 to 18. The considerable amount of hard work and dedication needed for success shone through on the night of the performance; testimony to the fact that historically the English, one of the great ballet-loving nations of the world, have produced world-class dancers, choreographers and knowledgeable, appreciative audiences throughout the 20th century to the present-day.

First performed at the Paris Opera house in 1841 and originally set in a Rhineland village, Act one of Giselle celebrates the temporal world of human life, its joys and passions, the harvest of the fruits of the earth with an emphasis upon human mortality. In complete contrast Act  two of Giselle is set at night, in the supernatural and eternal world of the Wili's, vengeful female spirits who, jilted in love before their wedding-day have died heart-broken at their own hands. In the  second act of  EYB’s Giselle the corps de ballet was most spectacular in the co-ordination and symmetry of  two dozen ballerina’s dancing collectively as ethereal Wili’s.  In Act  two  Giselle defies the harsh rule of Myrtha, Queen of the underworld, that her lover Albrecht must suffer the fate of dancing himself to death (a curious anticipation of the climax of the first modern ballet of the 20th century, Stravinsky's  Le Sacre du Printemps).

With its  themes of  madness and suicide, the supernatural world and the power and triumph  of  love beyond the grave,  Giselle is the quintessential Romantic ballet. It’s a ballet which is notable on several accounts. Firstly for being a ballet for which music was written especially for it, the composer Adolphe Adam's score is full of memorable and danceable melodies, its also the first ballet score to use a leitmotif, that is, a recurrent  musical theme.

Secondly, as in Swan Lake, the principal role in Giselle makes considerable demands upon the prima ballerina who must be able to dance two quite different characters. In Giselle the prima ballerina dances the part of an innocent country girl who suffers heart-break, followed by madness and suicide. In Act 2 she must dance as an ethereal, other-worldly, spirit-creature who is determined to defy the  harsh rule of  Myrtha, Queen of the underworld. The part of  Giselle and of Queen Myrtha were excellently performed in the EYB production.

The role of Giselle was first danced by Carlotta Grisi at the tender age of 22; she was also the lover at the time of Jules Perrot, the first choreographer of Giselle. The ballet was first dreamt-up by the literary critic Theophilus Gautier from his reading a poem by the German poet Heinrich Heine.  In 1841 Gautier wrote to the German poet-

'My dear Heinrich Heine; when reviewing your fine book Uber Deutschland a few weeks ago, I came across a charming passage....where you speak of elves in white dresses, whose hems are always damp; of nixies who display their little satin feet on the ceiling of the nuptial chamber; of snow-coloured Wilis who waltz pitilessly and of those delicious apparitions you have encountered in the Harz mountains and on the banks of the Ilse, in a mist softened by German moonlight; and I involuntarily said to myself: 'wouldn't this make a pretty ballet'. 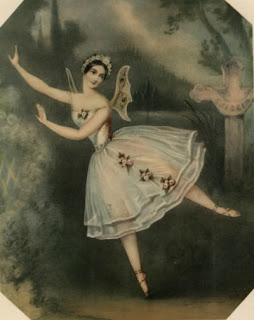 Carlotta Grisi in the role of Giselle