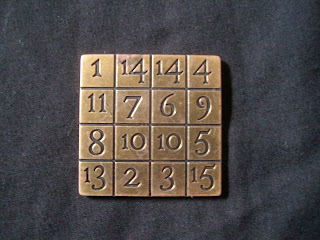 Recently, while browsing in a charity shop, I found a small brass square with numbers inscribed upon it. After purchasing it and taking it home I discovered that the same total sum occurs, not only on vertical, horizontal and diagonal lines of the square, but also in each quadrant section and the central quincunx of  its squares; in each way, including all four corners, the resultant number of thirty-three is made. (Photo above).

Turns out I've stumbled upon a discarded souvenir from Barcelona, Spain, from the cathedral of Sagrada Familia to be precise. The latin words inscribed upon the reverse of, what is little more than an esoteric fridge-door magnet- TEMPLE EXPIATORI SAGRADA FAMILIA confirm the  probable origin of the brass magic square of numbers.

The unfinished cathedral in Barcelona was designed by Antoni Gaudi and later sculpted by Josep Maria Subirachs, when  he started work on the Sagrada Familia in 1987.

In squares of order 4 where the numbers run sequentially from 1-16 the magic constant (the sum of a single line, row or diagonal) is 34, however in Joseph Subirachs' square the numbers 12 or 16 are omitted while the numbers 10 and 14 are duplicated, making a magic constant of 33, a number associated with the age of Jesus Christ at the crucifixion. 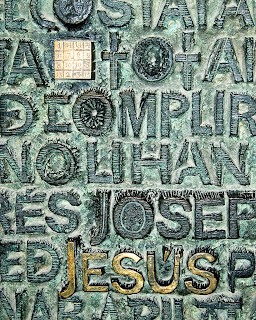 A section of the text on the great doors at the west end of the Sagrada Família includes a magic square which was added by the Catalan sculptor. Every diagonal, row or line sum equals 33, symbolizing Christ's age at crucifixion. 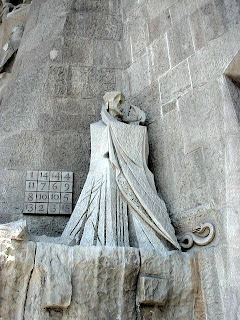 Subrirach's magic square can also be found on the Passion facade of the Sagrada Familia.(above). 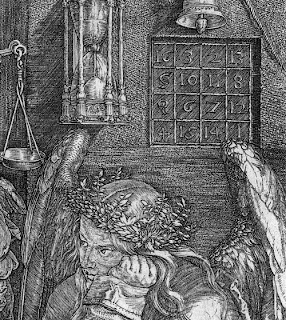 Another well-known example of a magic square of numbers occurs in the German artist Albrecht Dürer's Melencolia I.(above). In its background a magic number square can be seen in which the year of Durer's composition is inscribed in the bottom row, 15-14.

Number, along with colour, is among the deepest-rooted of all unconscious symbols. We are incapable of expressing consciously all the known associations of a symbol. Psychologically, just like each individual life, a symbol is alive and simultaneously consists of both a known and an unknown content. The colours, (not strictly colours) black and white for example, will forever hold positive and negative associations with virtue, vice, morality, emotion and mood. The colours of National flags and sports teams are often embedded deep within individual psyche's; just as the colour pink is invariably culturally embedded in gender association; no matter how consciously resisted, number and colour hold deep unconscious associations.


The ancient Greek Pythagoras based much of his teachings upon number. Worshipped as a god for almost 1000 years, the mystical philosopher once declaring - 'All is arranged to number'. Pythagoras expressed his mystery religion through symbols such as the celestial 'harmony of the spheres', geometry and the tetraktys, a pyramid of dots structured upon the sum of 1 + 2 + 3 + 4 = 10  the number by which the followers of Pythagoras swore allegiance to him.


Number symbolism occurs in many world cultures and religions, including the Old and New Testaments of the Judaeo-Christian tradition, from the first book of the Bible describing the four rivers flowing out from Eden in Genesis, to the naming of the beast 666 in the 27th and last book of the New Testament, the book of Revelation. The numbers 7, 12 and 40  - frequently encountered in the Old Testament, retain spiritual significance to believers.

It's due to a Christian perspective in western culture that the number 13 is considered unlucky and why some high-storey buildings such as hotels omit the floor number. The whole conflict and religious schism between Protestantism and Catholicism can be expressed as a conflict between the numbers 3 and 4, the number three being favoured by Protestantism as representing the Trinity, while the number 4 is closely associated with the addition of the sacred feminine of the Virgin Mary and the symbolism of the tetramorph, the four figures of the evangelists of the New Testament in Christian iconography.

In the twentieth century the Swiss psychologist C.G.Jung based his psychology on their being four distinct functions or entities of psychic activity. He also liked quoting the opening words of Plato's influential philosophical dialogue the Timaeus as an example of Plato's awareness of a conflict existing between the numbers 3 and 4. C.G. Jung considered it highly significant that both Plato, and in the modern era, the German polymath Johann Goethe, were aware of this conflict-

'One, to, three -  but, my dear Timaeus, of those who yesterday were the banqueters where is the fourth ?

C.G.Jung also interpreted the numbers 4 and 5 as representing a dilemma between nature and culture, stating-

'There is thus a dilemma between four and five. Five is the number assigned to the 'natural' man, in so far as he consists of a trunk with five appendages. Four on the other hand, signifies a conscious totality. It describes the ideal 'spiritual' man and formulates him as a totality in contrast to the pentad, which describes the corporeal man....The dilemma of four and five corresponds to the conflict between “culture” and “nature”.  [1]

The number ten is prominent in the Judaic tradition of the ten commandments of Moses and in the ten entities or Sephiroth of the kabbalah of Judaism. It is also the number the hermetic philosopher Sir Thomas Browne consciously evokes in the totality of chapters in his literary diptych  Urn-Burial and The Garden of Cyrus.  Browne confidently declared in Religio Medici (1643) - I have often admired the mystical way of Pythagoras and the secret magic of numbers  and Pythagorean numerology plays no small role in his last published work, The Garden of Cyrus (1658). Like the known half of a symbol conjoining the hidden half of a symbol, Browne's The Garden of Cyrus is dense in associative symbolism as its artificer playfully provides evidence of the number five, including its geometric form, the Quincunx pattern, is archetypal in nature and art-design; its presence as an archetype is also discerned in the spiritual mysteries of Christianity, the kabbalah and astrology.


whether this number be oftner applied unto bad things and ends, then good in holy Scripture, and why? He may meet with abstrusities of no ready resolution.

We can be fairly confident that Browne was knowledgeable on mystical numerology;  In  a chapter of his encyclopaedic endeavour Pseudodoxia Epidemica  entitled  'Of the great Climacteric year, that is, Sixty three'  he discusses the influence of numbers thus -

Thus is it not improbable it hath also fared with number, which though wonderful in itself, and sufficiently magnifiable from its demonstrable affections, hath yet received adjections from the multiplying conceits of men, and stands laden with additions, which its equity will not admit.

For first,  not only the number of 7 and 9 from considerations abstruse, have been extolled by most, but all or most of the other digits have been as mystically applauded. For the number of One and Three have not been only admitted by the Heathens, but from adorable grounds, the unity of God, and mystery of the Trinity admired by many Christians. The number of four stands much admired, not only in the quaternity of the Elements, which are the principles of bodies, but in the letters of the Name of God, which in the Greek, Arabian, Persian, Hebrew, and Egyptian, consisteth of that number; and was so venerable among the Pythagoreans that they swore by the number four.That of six hath found many leaves in its favour; not only for the days of the Creation, but its natural consideration, as being a perfect number, and the first that is completed by its parts; that is, the sixth, the half, and the third, 1. 2. 3. Which drawn into a sum, make six. The number of Ten hath been as highly extolled, as containing even, odd, long, plain, quadrate and cubical numbers; and Aristotle observed with admiration, that Barbarians as well as Greeks, did use numeration unto Ten, which being so general, was not to be judged casual, but to have a foundation in nature. So that not only 7 and 9, but all the rest have had their Eulogies .. [2]

A casual perusal of the 1711 Sales Catalogue of Sir Thomas Browne's library reveals the 17th century physician-philosopher possessed a commentary on Pythagoras and books by the ancient Greek mathematicians Euclid and Archimedes.  Janus-like, he also kept abreast of the latest discoveries of modern-rational deductive mathematics as advanced by his contemporaries. The British mathematician William Oughtred (the inventor of the slide-rule who is also credited with introducing the symbol X into mathematics) along with contemporary mathematicians Seth Ward and Henry Briggs are represented in Browne's library. [3]

It's worth remembering that no small proportion of the scientific thinking developed in the 17th century scientific revolution by men such as Galileo, Kepler and  Robert Hooke, Boyle and Newton in Britain, were scientists who promoted new ideas on nature, maths and physics and whose ideas formed the backbone of the Industrial Revolution, often held a deep interest in esoteric disciplines.

The scientific revolution, in Britain in particular, as Dame Frances Yates amply demonstrated, was the product of a hybrid of scientific thinking which evolved as much from the study of esoteric sources such as Pythagorean numerology as the methodology of rational, deductive science. In fact, many embryonic scientific discoveries were incubated in the womb of pre-Christian, pagan sources, especially from the ideas of Pythagoras and Plato, along with a host of esoteric traditions, notably from the triumvirate of alchemy, astrology and the cabbala, all of which utilized sacred numerology in one form or another.

Esoteric symbolism continues to live in modern architectural wonders such as the cathedral Sagrada Familia at Barcelona in Spain, and in mundane and trivial souvenirs for tourists. 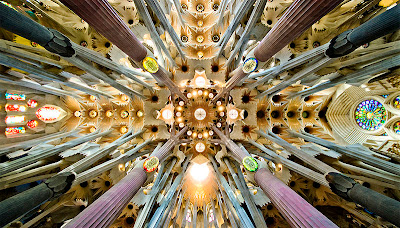 That's a neat article in The Guardian! Thanks. I have no doubt that Browne enjoyed such things as much as our Franklin did. And Euler's formula is just great.

I enjoyed this one a lot. Relevant books I've read on the subject include Nicomachus's "Introduction to Arithmetic," Kepler's "Harmonies of the World," and Pascal's "Arithmetic Triangle." Thanks for enriching my understanding of mystical numerology. The square itself was fascinating.