Dr Fischer of Geneva or The Bomb Party 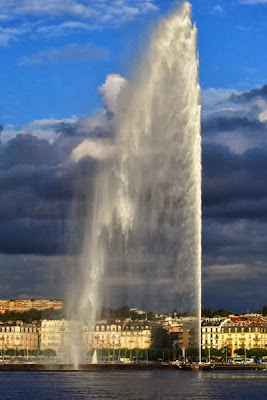 Last night I re-read in one sitting Graham Greene's novella Dr Fischer of Geneva or The Bomb Party (1980). One of the greatest of 20th century English novelists, Greene's novels contain acute and sometimes controversial observations upon the human condition. In his last ever novel, Graham Greene (1904 -1991) explores the nature of greed, in particular the greed of the rich.

The novella (140 pp) is narrated from the perspective of the endearing character of Alfred Jones, a translator for a chocolate factory in Geneva. When Alfred meets Anna-Luise, the estranged daughter of the fabulously wealthy Doctor Fischer, he becomes her lover. Anne's father has acquired his enormous wealth through the invention of Dentophil Bouquet, a toothpaste which ironically Alfred notes, is antithetical to the effects of eating too much chocolate. Alfred is invited to attend one of Dr Fischer's notorious parties at which extraordinarily valuable presents are given to guests on sufferance of humiliation. At the first party which Alfred attends cold porridge is served to his sycophantic guests. The sadistic nature of Dr Fischer ensures his guests are well aware of his rules, one must endure considerable humiliation from him in order to receive an expensive gift. Without wanting to post spoilers to what is a short story which packs a punch, the denouement of the novel involves a variant of Russian roulette, in which the ultimate test of human greed is made.

Throughout his novella Greene makes several noteworthy statements upon the human condition, he suggests, through the voice-piece of Alfred, that the human soul is like an embryo which develops from suffering. Because children and animals do not suffer except for themselves, Alfred proposes they do not have souls. A soul, states Alfred, requires a private life. 'If you have a soul you cannot be satisfied', he asserts. When asked by Anna-Luise whether her father, Dr. Fischer has a soul, Alfred replies, 'He has a soul alright, but I think it may be a damned one'. Alfred also notes that silence can only be enjoyed by those not experiencing unhappiness.

But its the subject of greed, and by extension, its poisonous relationship to the soul, which is central to Greene's novella, especially the rapacious greed of the rich. Published at the onset of decades of sanctioned greed (1980) Doctor Fischer, not unlike certain members of the present-day British government, justifies his greed and contempt for humanity in general, as a healthy and natural instinct. Having little or no empathy or understanding of the suffering of others, once more not unlike the legislative policies of the present-day British government, Doctor Fischer is quite happy to feed his greed at the expense of others.

Often closely allied to cruelty, greed inevitably knows no morality and often quite mercilessly exploits the vulnerability of others. Its estimated that the wealth of the very richest in society has actually increased since the world recession of 2008 began.  Present-day economic policies in the USA and GB continues to increase the wealth of the very richest 1% of society at the expense of the poor, quite literally robbing from the poor in order to make the rich even wealthier. The madness of greed, as Greene masterly depicts in his novella, has neither shame or social conscience.

Although it is purely advertising blurb, on this occasion I'm inclined to agree with The Times literary critic who's quoted stating on the back-cover of the Penguin edition of Greene's novella - 'Manages to say more about love, hate, happiness, grief, immortality, greed and the disgusting rich than most contemporary  English novels three times the length'.

Incidentally, and somewhat surprisingly, although Graham Greene's novella its set in Geneva, there's no mention of the famous landmark of the Swiss city, namely the Jet d' eau, the fountain which spouts water some 140 metres into the air (photo above). The setting of Geneva is however highly appropriate for the novella's theme of greed. Well-known as a city of great wealth, Geneva is listed as one of the most expensive cities in the world, as I personally discovered when visiting the Swiss city one summer and winter last century. I also vaguely remember watching a 1985 TV adaptation of Dr Fischer of Geneva or The Bomb Party with James Mason in his last ever acting role as Doctor Fischer, Alan Bates as Alfred and Greta Scacchi as Anna-Luise.
No comments: