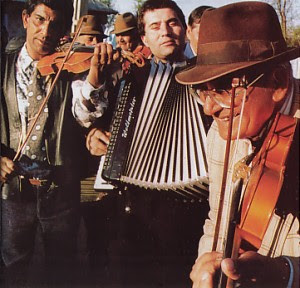 Taraf de Haidouks (Band of Outlaws) are a collective of Romanian musicians who are now celebrating their 25th year with a world tour. They will be performing in Wales in August, Stockholm, Sweden Friday 18th September, Lille in France, Friday 16 October and Mexico City, Mexico, Sunday 25th October this year (2015). Given their scheduled world tour it was a lucky event for fans to catch them at the Theatre Royale at Norwich, as part of the Norfolk and Norwich Festival. Although now three months ago, the memory of hearing these Romany musicians perform with astounding virtuosity remains fresh, helped by re-hearing their CD back catalogue on ipod.

The Norfolk and Norwich Music Festival itself has an illustrious history. British composers such as Edward Elgar, Ralph Vaughan Williams, Arthur Bliss and Benjamin Britten all had world first premieres of their music performed at the Festival. In more recent times composer/performers such as Philip Glass, Ute Lemper, Michael Nyman, John Cale, Laurie Anderson, Terry Riley, Ray Davies and David Bedford have all performed at the Festival.

Taraf de Haidouks hail from Clejani, a village which is noted for its traditional Romany musicians who have passed their skills down from generation to generation for decades and even centuries. Taraf de Haïdouks began their music career when Belgian promoter Stephane Karo travelled to Romania in the late 1980s in search of a group of musicians he had discovered on an obscure recording. However it was not until the downfall of the dictator Nicolae Ceaușescu (1918-1989) that travel restrictions for Romanians were lifted and the current interest in Romany music with bands such as Taraf de Haidouk began. The lyrics of their Song of the Dictator describes the events leading up to the overthrow of the Romanian dictator.

Song of the Dictator

Green leaf, flower of the fields
What are the students doing ?
Into the cars they step
Towards Bucharest they head
Into the streets. They shout
'Come out Romanian brothers,
Let's wipe out the dictatorship'.

Ceasescu hears them
His ministers call for
a helicopter which takes him away
What do the police do ?
In his steps they follow,
In a tank they bring him back,
In a room they lock him up,
and so his trial begins.
His blood pressure we take,
And the judge condemns him:
'Tyrant, you have destroyed Romania'.

Romany culture has an interesting, if slight association with Norwich for the author George Borrow resided there in his youth. Over the course of his travels, Borrow developed a close affinity with the Romany people of Europe. Descriptions of Romany folk and their culture feature in each of his books including the autobiographical Lavengro, and The Romany Rye, in which Borrow  recollects his time with English Romany gypsies.

Borrow's travels included Russia, Portugal, Spain and Morocco. Wherever he travelled he acquainted himself with the people and languages of the various countries he visited. Fascinated by gypsy music, dance and customs he even became familiar enough with the Romany language as to publish a dictionary of it. When in Moscow Borrow visited Russian gypsies camped outside the city. His impressions formed part of the opening chapter of  The Zincali: or an account of the Gypsies of Spain (1841). But it was while walking on Mousehold Heath, a large area of heath and woodland on the north-eastern outskirts of Norwich, adjacent to Lavengro and Gertrude Road, that George Borrow first encountered gypsy culture. His friend Jasper Petulengro (meaning blacksmith) revealing his gypsy soul to him 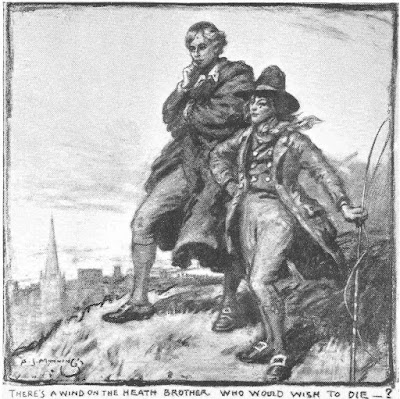 "There's night and day, brother, both sweet things; sun, moon, and stars, brother, all sweet things; there's likewise a wind on the heath. Life is very sweet, brother; who would wish to die?"

Petulenegro also says in Lavengro perhaps even while standing on the steep chalk hill which leads up to Mousehold heath, with its fantastic view of Norwich, as imaginatively depicted here by Alfred Munnings (above )

There's the wind on the heath, brother; if I could only feel that, I would gladly live for ever.

There can be little doubt that George Borrow with his fascination with gypsy culture would have enjoyed Romany-styled music by bands such as Taraf de Haidouks and the brass ensemble Fanfare Ciocărlia.


There's a strong vein of Romany stereotype, as if in the foot-hills of the Carpathian mountains, with the castle of Count Vlad Dracula in the distance, in the slightly spooky, near shamanistic invocation, Hora Din Caval.


To a highly-modernized western society, one appeal of Taraf's music is that it speaks of a long-lost nomadic, wandering life, living close to nature, aware of changing fortune, communally sharing life's joys and sorrows, as well as experiencing injustice and persecution for one's beliefs, non-conformity and misunderstood life-style.

Taraf perform music which is based upon unusual Balkan folk rhythms, tonality and instrumentation;  each and every musician in Taraf is  a consummate master of his respective instrument, which includes the highly-characteristic sound of the Cimbalon, as well as violinists, flautist, accordion-players and bassist. Together they share jokes and banter on-stage, encouraging each other to produce some remarkable solo performances as well as playing poignant melodies with syncopated rhythms at incredibly fast tempo together.

The evening's music-making was further enhanced by the appearance of the glamorous Viorica Rudareasa who first recorded with Taraf  on Dumbala in 1998. Dancing in her high heels (no mean feat)  on the evening Viorica sang numbers from the band's latest album Of Lovers, Gamblers and Parachute Skirts (2015) including -


The evening was memorable on another account personally, for while sitting in the rear row of the stalls of the theatre, I could not but help notice a group of young men energetically bobbing their heads up and down in time to the highly infectious rhythms of Taraf de Haidouks. On closer examination with opera glasses I was pleased to discover I share a similar taste in music with my son and his friends. The very best music unites and transcends the generations.

George Borrow and his novels

This one for Carl Brown and John.
No comments: