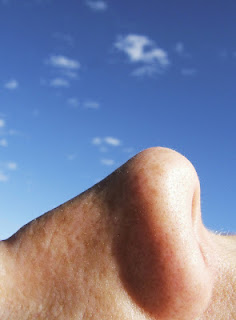 'Just one sniff and you'd wish you were one huge nose!'

Evidence can be found in the collected writings of Sir Thomas Browne (1605-82) that each and every one of the  seventeenth century Norwich physician's five senses were well-developed and refined, yet restrained. In an age of few pleasures his 'Notes on the cookery of the Ancients'  with its passionate utterance-

'I wish we knew more clearly the condiments of the ancients, their sauces, flavours, digestives, tasties, slices, cold meats, and all kinds of pickles. Yet I do not know whether they would have surpassed salted sturgeons’ eggs, anchovy sauce, or our royal pickles. [1]

suggests he enjoyed the sensory pleasure of taste, whilst Browne's fathering of eleven children hints of his being not totally immune to the most basic pleasures derived from the sense of touch.

Of the higher senses, the innate musicality of Browne's prose, in particular the discourse Urn-Burial (1658), with its 'vast undulations of  sound'  and 'full organ-stops' along with the hymn-like final paragraphs of  The Garden of Cyrus, testify to a good ear for rhythm and harmony, fundamentals of music-making, while Browne's frank declaration -

I can look a whole day with delight at a handsome picture, though it be but of an horse'. [2]

his appreciation of the beautiful in art and nature, usage original optical imagery in his prose along with the numerous perspicacious botanical observations in the central chapter of The Garden of Cyrus, are all evidence of a highly-developed visual sensibility.

As with each of his other senses, there's evidence that Browne's olfactory sense was acute.  In Browne's major writings various references to smell occur, either in a medical capacity as a physician and early scientist, or in the form of olfactory imagery.

Browne's era was one in which primitive sanitation, numerous diseases and variable personal hygiene standards thrived. For these reasons,  like many others, he was highly appreciative of fragrances. It is difficult for us today to imagine  the intensity of the various malodorous smells of his day. Many of the smells of Browne's era are now long lost to the sanitized and relative odourlessness of modern life.

Its worthwhile reminding ourselves of a few basic biological facts. The nose is a sensory organ constantly exposed to the environment; its 50 million receptors are the only part of the brain which are not encased within the skull. The nose constantly receives impressions, many of which are involuntarily. Smell is capable of awakening and unlocking long forgotten memories of specific places, times and feelings. Smell can also evoke extremely strong feelings, ranging from disgust and repugnance to well-being and euphoria. The role of pheromones in sexual attraction is now well recorded, while the nose's 'intuitive deductive' capacity was of paramount importance to early man in distinguishing between edible food and warning away from poisonous substances. But although the nose is capable of differentiating between thousands of different smells, the sense of smell remains the least understood of all the senses, in particular its relationship to emotion and memory. There is no theory yet which can entirely explain olfactory perception.

One of the earliest studies on smell was by the Ancient Greek philosopher Theophrastus (c. 371-287 BCE) who wrote a tract entitled 'On Odours'. Olfactory descriptions abound in the Deipnosophistae or 'Banquet of the philosophers' by Athenaeus (circa 200 CE), a favourite read of Browne's by all accounts [3] whilst the Latin word 'Sagacious', originally meant not only clever but also possessing a keen sense of smell.

Although smell, or  more accurately, scent was extensively used in the rituals of religious worship in the ancient world, early Christians and later those of a Puritan persuasion, associated perfumes and highly scented fragrances with the Roman Empire which had persecuted their religion, so they often censored and disapproved of the usage of incense in ritual worship and personal use.

Renaissance Scholars and poets were aware that olfactory imagery was employed in Classical Greek and Roman literature in order to describe beauty, ugliness, moral worth and virtue. Olfactory imagery can be found in the writings of many English literary figures including Shakespeare, along with Browne's contemporaries, Milton, Donne, Herbert and Herrick.

In the twentieth century the power of smell has been explored by writers such as Marcel Proust, and more recently by Patrick Suskind in his novel Perfume (1985). The artist Guy Bleus (born 1950) is credited as one of the first to systematically use scents in the plastic arts. In 1978 he wrote the olfactory manifesto The Thrill of Working with Odours in which he deplored the lack of interest in scents in the visual arts. Since then he has exhibited smell paintings, mailed perfumed objects and made aromatic installations; he also created spray performances in which he sprayed a mist of fragrance over his audience.

Browne's first usage of olfactory imagery can be found in his spiritual testament Religio Medici (1643), in this particular case in order to illustrate a paradox of the human condition, the conflict between the emotions and reason, a subject not without relevance in much current-day political debate.

'In all disputes, so much as there is of passion, so much there is of nothing to the purpose, for then reason like a bad hound spends upon a false sent, and forsakes the question first started. [4]

In his quirky encyclopaedic endeavour Pseudodoxia Epidemica (1646-72) Browne  makes one of the earliest modern scientific observations on smell. He notes that every man may have a proper and peculiar savour; that the sense of smell is acuter in dogs than man, and that the Greek philosopher Theophrastus recorded Alexander the Great to be sweet-smelling. After speculating upon how diet and ill-health may make some people smell unpleasant, the learned physician vigorously attacks  a common belief of his era that any single Nation of people can smell bad, in particular, the anti-semitic slander. Using two of the three determinators to ascertain truth, namely Reason and Experience, Browne argues that such a belief is irrational and a harmful prejudice. [5]

It was the Renaissance alchemist-physician Paracelsus (1493-1541) who urged the medical practitioner to enquire into the properties of Nature, thus when a Spermaceti whale was reported beached upon the Norfolk coast, Browne duly set off from Norwich to investigate it. In a famous descriptive chapter, which incidentally influenced the American author Herman Melville's description of a whale in 'Moby Dick', Browne wrote of the putrefying Spermaceti carcass-

'But had we found a better account and tolerable Anatomy, of that prominent jowle of the Spermaceti Whale , then questary operation, or the stench of the last cast upon our shoar, permitted, we might have perhaps discovered some handsome order in those Net-like seases and sockets, made like honey-combs, containing that medicall matter'. [6]

Browne's scientific investigation however was thwarted by 'insufferable fetour denying that enquiry', the creature's 'abominable scent'  agitating the physician's olfactory sensibility. Browne concludes his chapter upon the Spermaceti whale with learned humour, thus-

And yet if, as Paracelsus encourageth, Ordure makes the best Musk, and from the most fetid substances may be drawn the most odoriferous Essences; all that had not Vespasian's Nose, might boldly swear, here was a subject fit for such extractions. [7]

Browne's allusion to Vespasian's nose [8] originates from an anecdote recorded in Suetonius's Lives of the Caesars. When Titus, the son of the Roman Emperor Vespasian, complained to his father of a tax he'd imposed upon public Urinals Vespasian showed Titus a coin from the first day's tax, then asked him, 'Does it smell bad my son?' Titus replied, 'No father!' To which Vespasian allegedly retorted, 'That's odd it comes straight from the Urinal!'

Its also in Pseudodoxia Epidemica  that an early reference by Browne to plastic surgery upon the nose occurs in the passing remark- 'we might abate the Art of Taliacotius, and the new in-arching of Noses'. [9]

This remark is explained thus - 'An early form of plastic surgery, as it were: surgical grafting, especially of noses. Such operations were fairly common and quite successful'. [10]

Smell, or more precisely, fragrance is quite naturally featured in The Garden of Cyrus (1658) in which Dr. Browne lyrically exclaims-

...whereto agreeth the doctrine of Theophrastus. Arise O North-wind, and blow thou South upon my garden, that the spices thereof may flow out; For the North-wind closing the pores, and shutting up the effluviums, when the South doth after open and relax them; the Aromatical gums do drop, and sweet odours fly actively from them. [11]

'That the richest odour of plants, surpasseth that of Animals may seem of some doubt, since animal-musk, seems to excel the vegetable, and we find so noble a scent in the Tulip-Fly, and Goat-Beetle'. [12]

'Nor will the sweetest delight of Gardens afford much comfort in sleep; wherein the dullness of that sense shakes hands with delectable odours'; [13]

Finally, late in his life, Browne wrote a highly unusual work entitled Museum Clausum, (circa 1675) an inventory of lost, rumoured and imagined books, pictures and objects conjured from the learned philosopher-physician's rich and fertile imagination. One particular object listed in miscellaneous tract 13 suggests that Browne recognised and identified smell's ability to alter and raise consciousness, anticipating modern-day alternative medicine such as aromatherapy even.

18. A transcendent Perfume made of the richest Odorates of both the Indies, kept in a Box made of the Muschie Stone of Niarienburg, -
.

'both the Indies' is alluded to by Browne's contemporary, the alchemist Thomas Vaughan (1621-1665) in his writing-

'He who journeys through this great and wide sea may touch at both Indies.' [14]

The 'union of the Indies' is in fact a lesser-known symbol of totality in alchemy which is commented upon by the psychologist C.G.Jung thus  -

'As I have explained elsewhere, it leads to the four quarters, here indicated by the two Indies - East, West, - and by the turning of the compass to the north'. [15]

which when translated states -

This post is dedicated to the eminent Brunonian scholar Dr. Kevin Killeen with thanks for his illuminating talk on Thomas Browne, 'the cusp of Life and Death' delivered at the Chapel, Park Lane, Norwich on June 27th, 2018.

Browne on Art and Paintings