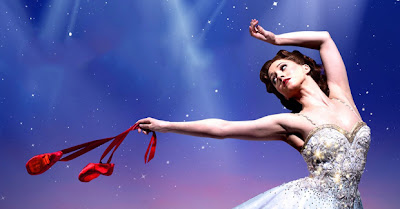 Its always exciting when New Adventures Dance Company are booked to perform at the Theatre Royal, Norwich; the return of leading British choreographer Matthew Bourne's ballet The Red Shoes was no exception.


First performed at Sadler's Wells Theatre, London on December 6th, 2016 with a set and costume designs by Bourne's long-time collaborator, Lez Brotherston, Matthew Bourne's ballet The Red Shoes is based broadly on the 1948 film The Red Shoes directed by Michael Powell and Emeric Pressburger, itself being loosely based upon Hans Christian Andersen's fairy-tale

The generous programme notes for the New Adventures production includes background information to the cult-status British ballet film The Red  Shoes and  the film-score music of Bernard Hermann (1911-75) composer of highly atmospheric music for Alfred Hitchcock's cinematic masterpieces Vertigo (1958) North by Northwest (1959) and Psycho (1960). Bourne has carefully selected several pieces of Hermann's music notably from Fahrenheit 451 which, accompanying innovative dance, gesture and mime, greatly enhance the 'story-telling without words'  narrative of  his ballet.

In interview Matthew Bourne stated, - "the image of the red shoes that, once put on, will not allow the wearer to stop dancing has long been a potent one for creative minds, from Powell and Pressburger to Kate Bush to Emma Rice. I have loved the film since I was a teenager with its depiction of a group of people all passionate abut creating something magical and beautiful. The film's genius was to take a highly theatrical world and turn it into a highly cinematic and at times, surreal piece of film-making. My challenge has been to capture some of that surreal, sensuous quality within the more natural theatre setting" [1].

According to Bourne - "The main message of The Red Shoes is that nothing matters but art. As Michael Powell said: "The Red Shoes  told us to go and die for art." Whilst acknowledging the exaggeration here, I believe it was a piece that asked us to take art seriously as a life-changing force; something that gives intense joy but also asks for and requires sacrifices. It is the love story of two young artists: one a dancer, Victoria Page; and one, a composer, Julian Craster, and the fight between that love and the lure of the highest artistic achievement. [2]

"I'm also exploring how the fairy-tale world of ballet and the stories it tells can actually blend into the real-life tale of love, ambition, artistic and personal fulfillment, until the two are barely distinguishable". [3]

Its as a tight-working ensemble more than featuring any particular star that the New Adventures dance company operate best, though on the evening principal dancer Ashley Shaw in the role of rising star Victoria Page was confident as a star in her own right.  As ever the lighting and special effects were spectacular too, especially the sudden arrival of the  locomotion train.

The extraordinary choreographic talents of Matthew Bourne (b. 1960) and his latest ballet The Red Shoes (2016) expands the New Adventures repertoire to no less than 12 full-length productions. In  2016 Bourne was awarded an OBE and in 2017 he won the award of Best Theatre Choreographer and the show itself won Best Entertainment at the 2017 Olivier Awards.  The New Adventures  dance company  collectively have garnered over 50 International and National awards.


I've now had the pleasure of seeing several Matthew Bourne's ballets performed at Theatre Royal, Norwich, including- Edward Scissorhands (1995), Highland Fling (2005) and Sleeping Beauty: A Gothic Romance (2012). I could not help but notice that according to the evening's programme notes there has been some kind of major reshuffle in the company; of the 24 dancers, almost half (11) are listed as joining the company as recently as 2017. However, judging by the ecstatic response and standing ovation on the night from the discerning Norwich audience that The Red Shoes seems guaranteed to be a popular, long-lasting addition to New Adventures already highly original repertoire. 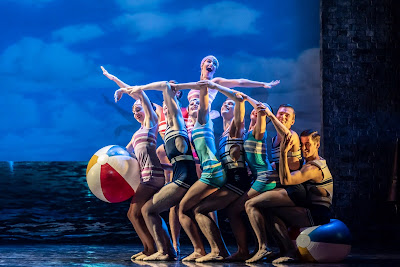