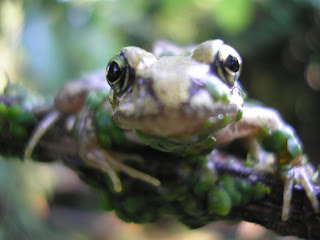 With the Vernal Equinox just past love is in the air and spawn is in the water. Ever curious of the natural world Sir Thomas Browne took a zoological interest in the amphibious creature. Of as great an interest is the idiosyncrasy of his spelling!
Froggs taken in the first season of coition containe in their bellies spawne of the same figure and connexure as it appeareth in the water, as may bee discovered in the bellies of the female, which are the greater sex; observable it is how large a proportion the seminary vessels & parts of generation doe make unto other parts, and seemes to occupie the cavity of the lower belly, wherein the testicles are also very conspicuous & turgid in the male.
2 froggs coupled wee put in a cistern of water at the first promising dayes of the spring: wherein they continued just about twentie days, nor did they seperate although in divers dayes the water froze them over, at length the female dyed, the male notwithstanding an hard complexure at least 3 dayes after. In the cisterne more spawne was found then both their bodies wayghed, beside some part remaining in the body of the female, whereof some hanging out discovered manifestly that passage which at other times is very obscure, some remaining in the body more black stiff & clamie.
2 lived coupled the yeare succeeding, 3 weekes, & though frozen mayntained copulation. Remarkable it is with strong complication the male fastneth unto the female belowe the forleggs, & unto what largeness & under a downy black colour like catstayles of the water the thumbs of male froggs doe swell, which wee have not observed in the complexure of the male toade out of the water.
Of this spawne singular uses may bee made in physick, & though for the preservation thereof it may bee only distilled, yet may it bee kept fresh all the yeare under oyle, making choyce of fresh spawne, which will either hold its proper figure or else the black specks subsiding and separating will leave the white & aqueous part entire; the whole masse of spawne may also bee imbibed by bole or frankincense or minium or cerusse incorporated by agitation or subaction.
from British Museum Sloane 1875

Could you recommend an edition of Sir Thomas Browne:
Religio Medici, Hydriotaphia and The Garden of Cyrus
in which they've preserved the original spelling?

To my knowledge there is no edition of Browne with modernized spelling, though many wish there were !

The best edition of Browne remains the Penguin edition edited by C.A. Patrides, it's no so cheap due to it being a so-called low print edition.

It's possible to acquire cheap Victorian editions of the major works second-hand. My 1658 edition of Browne's encyclopaedia and 2 Discourses was not so cheap !

The best essay on Browne remains Peter Green's Writer and their Works no.108 Longmans.

Feel free to email me Judit, I am always happy to help those interested in reading and studying Sir T.B. as Coleridge called him.