Paracelsus on the interpretation of dreams 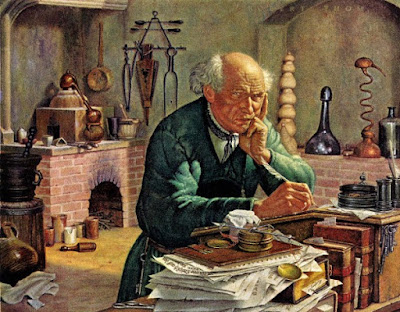 The alchemist-physician Paracelsus (1493-1541) is credited as the first to advocate chemical processes in order to obtain new medicines to alleviate diseases and illnesses, however, he remains a controversial and little-understood figure in intellectual history. It was during his life-time, that of the Renaissance, that new discoveries in almost every branch of the arts and sciences occurred, including the 'discovery' of the psyche.
Orthodox Christian theology however did not always possess a clear-cut view or answer to the new spiritual and psychological concerns experienced by many during the Renaissance age of transition. The effects of urbanization for example increased interaction between widely differing social, cultural, moral and religious perspectives and increased awareness of sexuality. From their close understanding of the human condition and dissatisfied with Christian dogma alchemist-physicians  as diverse as Paracelsus, John Dee, Van Helmont, Jerome Cardan and Thomas Browne augmented concepts originating from the western esoteric traditions or coined home-grown neologisms and their own symbols in order to describe their understanding of the psyche.  Each of these aforenamed alchemist-physicians took their own dreams far more seriously than any in contemporary society today, recognizing their dream-lives to be of great importance to their self-development or the individuation process in Jungian terms. From alchemist-physicians immersion and analysis of their dreams there emerged the beginnings of the modern science of psychology. These rudimentary and tentative understanding of the self and the unconscious psyche by alchemist-physicians, several of whom C.G. Jung  studied and closely based his psychology upon, were, as the Swiss psychologist recognized, the fruits of the Renaissance spirit of enquiry into nature, which includes human nature.
The rich and complex symbolism of alchemy contributed to the Renaissance 'discovery' of the psyche and the embryonic origins of modern-day psychology no less, although it was not until the early 20th century that the unconscious was identified and named as such by Freud. The hitherto hidden workings of the unconscious psyche could be revealed, Freud proposed and demonstrated, through an in-depth analysis of an individual's dreams.
The English alchemist-physician Sir Thomas Browne (1605-82) was a critical follower of Paracelsus who held a deep interest in dreams and the workings of the psyche. In his short tract on dreams Browne expressed a highly-evolved theory of dream interpretation which anticipates Jungian psychology-
"Many dreams are made out by sagacious exposition from the signature of their subjects; carrying their interpretation in their fundamental sense & mystery of similitude, whereby he that understands upon what natural fundamental every notional depends, may by symbolical adaptation hold a ready way to read the characters of Morpheus." [1]
Both Paracelsus and Sir Thomas Browne can justifiably be identified as Ur-psychologists who anticipated the analytical methodology of Sigmund Freud and Carl Jung. Paracelsus, like Freud centuries later, considered dreams and their interpretation to be the 'Royal road' to understanding of the psyche. He also recognised the supernatural element of dreams and that their interpretation is endorsed in the Biblical stories such as Joseph who successfully interpreted the Egyptian Pharaoh's dreams.
Paracelsus wrote the following extracts on dreams and their interpretation -
"The interpretation of dreams is a great art. Dreams are not without meaning wherever they may come from - from fantasy, from the elements, or from another inspiration.One can find something supernatural in them. For the spirit is never idle. If the earth gives us an inspiration - one of her gifts - and if she confers it upon us through her spirit, then the vision has a meaning.
"Anyone who wants to take his dream seriously, interpret it, and be guided by it, must be endowed with "sidereal knowledge" and the light of nature, and must not engage in absurd fantasies, nor look upon his dreams from the heights of his arrogance; for in this way nothing can be done with them. dreams must be heeded and accepted. for a great many of them come true.

"For the most part presentiments appear in man in so unimpressive  a form that they are ignored. And yet Joseph discovered in his sleep who Mary was and by whom she was with child. And because dreams are not sufficiently heeded, no faith is put in their revelations, although they are nothing other than prophecies.......

"The wise man must not neglect them, but recall that Christ too appeared in invisible form and was ridiculed. If he understands that inconspicuous things must not be ridiculed but judged with wisdom, he will also know Christ. The scoffers have no understanding, but the wise possess the knowledge that God has conferred upon them.

"The dreams which reveal the supernatural are promises and messages that God sends us directly; they are nothing but his angels. His ministering spirits, who usually appear to us when we are in a great predicament......Of such apparitions we must know how they take place and how they come to us; when we are in great need, we can obtain them from God's kindness if our prayer pours in true faith from a truthful mouth and heart. Then God sends us such a messenger who appears to us in spirit, warns us, consoles us, teaches us, and brings us His good tidings.

"From time immemorial artistic insights have been revealed to artists in their sleep and in dreams, so that at all times they ardently desired them. Then their imagination could work wonders upon wonders and invoke the shade of philosophers, who would instruct them in their art. today this still happens again and again, but most of what transpires is forgotten. how often does a man say as he wakes in the morning,  " I had a wonderful dream last night," and relate how Mercury or this or that philosopher appeared to him in person and taught him this or that art. but then the dream escapes him and he cannot remember it. However, anyone to whom this happens should not leave his room upon awakening, should speak to no-one, but remain alone and sober until everything comes back to him, and he recalls his dream. [2]

Wikipedia on Paracelsus  (This entry - begun by a Wikipedia contributor who has also been active for over 13 years, has on average 700-900 views daily)

Thank you for sharing this. I am not highly educated but somehow go down interesting paths from time to time that teach me. This path started with finding "slimy green balls" on a piece of off grid land. In trying to identify that, I learned about Paracelsus, who evidently named the species they are in.. Mare's eggs. Now here I am discovering this man also had to find his own faith and disagreed with much of the religious beliefs of that time. Same for me. So thank you!