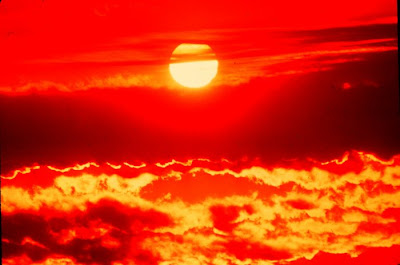 The south and east of England is presently experiencing a heatwave with the mercury hitting 30 celsius. One more warm night and day to go before it eases. Tomorrow is Norwich City's big civic day with the Lord Mayor's procession. This year the procession has been shifted forward to 5 p.m. instead of 6:30 p.m. I wonder if the organizers are now regretting that change of schedule in view of the predicted heat.

I like to watch this annual event as one can with a little discernment gauge the mood and wealth of the City by the quality and zest of the 70-odd floats that slowly trundle through the City. With an estimated crowd of 30,000 usually the largest assembly of people in the city centre in the year, the event's history can be traced back to the days of the medieval Guilds, associations of various trades and professions celebrating their relative autonomy. For over 400 years the procession was led by the 'Snap' dragon accompanied by the 'whiffler' a crowd-controlling civic who 'whiffled' or waved a sword in the air. Lewis Carroll in his nonsense poem 'Jabberwocky' uses the word thus-

And as in uffish thought he stood,
The Jabberwock, with eyes of flame,
Came whiffling through the tulgey wood,
And burbled as it came! 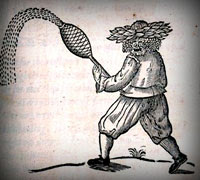 Another literary reference to Whifflers can be found in Shakespeare's Henry V Act 5 where the line, "which like a mighty Whiffler 'fore the king, seems to prepare his way" occurs.

By far the best information on the tradition and costumes of Norwich Whifflers including a priceless photo of the 1951 Lord Mayor's procession led by mace-bearer and accompanied by two Whifflers can be found at Norwich Whifflers.

On-line dictionary definitions of the word 'Whiffler' deliver a bewildering number of interpretations from - 'One who whiffles, or frequently changes his opinion or course; one who uses shifts and evasions in argument; hence, a trifler' to -

'Whifflers, or fifers, generally went first in a procession, at length a name given to those who went forward merely to clear the way for the procession. In the city of London, young freemen, who march at the head of their proper companies on the Lord Mayor's day, sometimes with flags, were called whifflers, or bachelor whifflers, not because they cleared the way, but because they went first, as whifflers did."

Or even- 'an officer who went before procession to clear the way by blowing a horn, or otherwise; hence, any person who marched at the head of a procession; a harbinger.'

But the Whiffler's ancient historical roots may in fact go back to the early Saxon era as an armed attendant who cleared the way for a procession (from wifle battle-axe, from Old English wifel, of Germanic origin; the attendants originally carried weapons to clear the way) as I first stated, a kind of civic crowd-controller, sometimes genteel and humorous, other times not.

Confusion about the meaning of this word arises from the fact that it's both a verb and a noun; the verb to whiffle, as Carroll uses it as an onomatopoeic, like the sound of a sword or stick being swished in the air; and it's a noun, as a figure of civic authority as in, 'Look out! Here comes the Whiffler!' But now I'm beginning to waffle, it must be the heat. Waffle hmmm, now there's another interesting word. 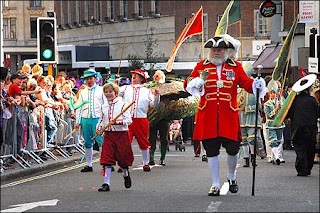 Hmm, 30°C being 86°F, the temperature here in Louisiana at 6pm, I suppose that humidity makes it more oppressive in both places, but our normal July daytime here is about 95°F. Try sirocco with 44°C. in Palermo, but that is very dry and demands only constant fluid intake, and a hat.
It is so long since I read it, but in Murder Must Advertise, doesn't Dorothy Sayers end up with a billboard advertising cigarettes with the slogan, Whiffle your way through Britain?

Interesting! I wonder if this has any connection to the Wiffle Ball, which anyone who grew up in the U.S. will be familiar with.

Now there's an interesting thought. I've really enjoyed reading your pieces on Classical music and Shostakovitch. When post my piece on Haydn symphonies I would really like to give a link to your review on Haydn's military symphony. Please email to to give your yea or nay on this.