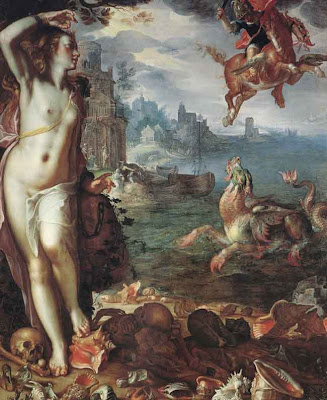 Recently, while looking at  late 1500's / early 1600's art-work of  illustrations relating to alchemy, I  discovered Joachim Wtewael's painting of Perseus and Andromeda. Wtewael's Perseus and Andromeda  is strong evidence that throughout the centuries, the myths of ancient Greece, with their many tales of transformation of mortal to immortal, love-intrigues between goddesses and heroes, and inter-action between gods and man, were a potent force upon the Western artistic imagination.

Joachim Wtewael of Utrecht (1566-1638) was a Northern Mannerist painter who stylistically adopted formal devices such as brilliant and decorative colour, contrived spatial design and contorted poses to great effect, as in his Perseus and Andromeda. Wtewael is also known for combining artifice with naturalism in his paintings and an ability to integrate two contrary aesthetics of Dutch 16th and 17th century painting, uyt den geest (from the imagination) and naer t leven (after life). He painted contrasting works such as Momento Mori,  a naturalistic domestic Kitchen scene, as well as a highly-formalised treatment of the myth of Vulcan surprising the lovers Venus and Mars, a popular myth throughout the Renaissance.


The Greek myth of Andromeda and Perseus tells of how Andromeda was chained to a rock on the shore as a sacrifice to the sea-monster Cetus. The sea-god Poseidon had sent the monster Cetus as a punishment for Andromeda's mother Cassiopeia's claim that she was more beautiful than the Nereid's. However, as soon as the hero Perseus, on his journey from the Gorgon saw Andromeda, he fell in love with her and petitioned  Cepheus her father that if he could destroy the monster he would give him the rescued girl as a wife. After oaths were sworn, Perseus confronted the monster, killed it and set Andromeda free. The myth is immortalized in the constellations of Draco, Perseus and Andromeda clustered together in the northern quarter of the night sky.


The Greek myth of Andromeda and Perseus, that of the damsel in distress saved by a knight in shining armour is an archetypal  myth which has inspired numerous painters throughout history as a subject worthy of artistic expression. Artists have responded to the myth of Andromeda and Perseus from either a conscious or unconscious need to express the freeing of the feminine, or perhaps in recognition of the repression and suppression of the feminine in their respective society, or even simply as a pliable and exciting love and action  story. It's a true roll-call of the Western artistic tradition how many famous artists have been inspired to devote their creativity to this myth.

Greek myths in general have been a constant source of inspiration to artists and thinkers throughout the centuries. It's interesting to note in passing that these include German alchemist Count Michael Maier (1568 -1622) who based  much of his spiritual alchemy upon Greek myth. While  the founder of psychology, Sigismund Freud named his first psychological theory after a hero of Greek mythology, Oedipus.

As Christianity developed it created its own mythology, often borrowed and adapted from ancient myth. The story of  Saint George and the Dragon has many striking similarities in theme to Perseus and Andromeda, and in all probability the Greek myth is the archetypal model for the Christian legend of Saint George. Examples of differing cultures and belief-systems distant in time to each other yet sharing similar myths hint  ultimately of the syncretic nature of myth, and are, as Jung realised in his long study of mythology, fairly frequent coincidences in comparative religion.


Remembering that myths originate from the earliest dawn of memory and consciousness and have been  elaborated upon throughout the generations; the myth of Perseus and Andromeda, essentially that of the hero rescuing the  'fair prize' of  a damsel in distress from the monster is in Jung's study of the archetypes, none other than a recognising of, integration and winning of the lesser known, 'undeveloped' or  'other' half' of the psyche, the anima by the Hero.

Jung argues that throughout western history, the male psyche has often belittled or even ignored, often to his detriment, qualities such as passivity, the skill of listening, empathy, sensitivity of feeling and capacity for intuition. Such mental qualities are often considered as somehow 'lesser' or 'feminine' qualities. However, in Jungian psychology, the feminine, the anima in a man and animus in women, are the very prizes which are 'hard to obtain'. Realization of the anima is the goal of the seeking Hero in his perilous quest of individuation, totality and psychic wholeness.

What's most notable in Joachim Wtewael's canvas, besides its overt eroticism, is its near hallucinatory luminescence in colouration and unusual perspective; these qualities remind one of other artists who were conjurers of magical, fantastic elements in their paintings.


Wtewael's Perseus and Andromeda  reminds one of  both the Flemish painter Hieronymus Bosch (1450-1516)  and of the Spanish surrealist Salvador Dali (1904-1989). Though centuries apart both these painters possessed a highly polished technique, as well as an inclination towards mysticism. Indeed, both Bosch and Dali painted The Temptations of Saint Anthony (1946) both contributing to Christian mythology, developing the early Christian legend that Saint Anthony, the early desert Father experienced mystical visions during his long solitary desert sojourns. 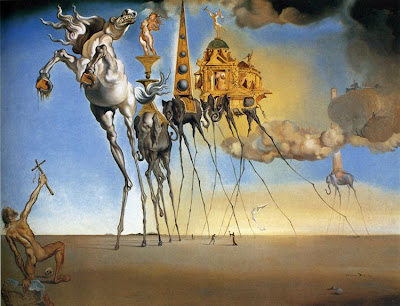 In their respective paintings of The Temptations of Saint Anthony  Dali and Bosch share a fantastic imagination and a brush-stroke technique able to make manifest  the creatures from their imagination . Their message is that the real monsters which beleaguer humanity are far more likely to be engendered from an inner spiritual conflict of the individual than from any external reality. 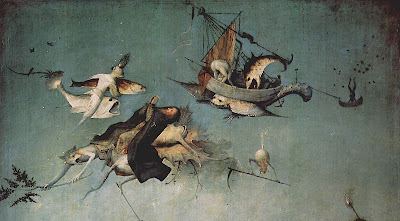 Hieronymus Bosch - A detail from the left panel of the triptych
- The Temptations of Saint Anthony c.1500

The highly spiritual landscape of the desert, a place of solitude, meeting of God, temptation and devilry has become in both Bosch's and Dali's  Temptations of Saint Anthony  crowded  and  populated  with bizarre creatures of fantasy, many  of a flying or air-borne nature.  The monsters in Bosch and Dali are far more numerous and scary than anything in Greek myth,  perhaps because the temptations of  the Christian Saint Anthony involves temptations  of sexuality. Both works are heightened  by an intensity of religious fervour. In Bosch's work one's eye is drawn to the close proximity of  optical tricks and the grotesques which surround the suffering Saint. Above him the sky is teeming with flying demon creatures. In a detail from the triptych  the Desert Father is praying while seemingly helpless in flight astride a flying creature.


In  Dali's painting  the eye is drawn away from the tormented Saint into a deep, seemingly infinite background  in which a procession of  improbably spindle-legged, almost floating elephants emerge to totter through the desert.  Carried upon the back of one elephant is a closet-like Ark enclosing the bare breasted torso of  a female nude. An extremely tortured  image, quite esoteric in its symbolism and almost revelling in its sexual neurosis. The fantastic landscape and drama of Wtewael's Andromeda, with its untroubled and unashamedly sexual  female nude is  no less surreal in perspective and imagery.