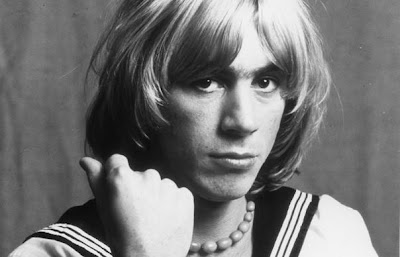 Give me leave to wonder that News of this nature should have such heavy Wings...

The sad news of British rock musician and song-writer Kevin Ayers death last week got me thinking about the fickleness of the British music industry and fame and fortune. I can’t remember being so moved over the death of a rock musician since hearing of John Lennon’s assassination in December 1980.

There’s something very poignant about rock stars ageing, whether gracefully or not, even more so when they die almost forgotten. Those acquainted with the back-catalogue of Kevin Ayers' recordings which span forty years, may well wonder whether his talent for penning witty and wistful songs ever got the full recognition it deserved. Contributing factors include changes in rock and pop fashion over time and Ayers' own refusal to compromise his artistic integrity and play the games dictated by the music industry.

With his good looks and rich baritone voice Kevin Ayers (1944-2013) was a charismatic rock-star who embodied the free-thinking counter-culture of the 1960's. Celebrant of elegance and decadence, Ayers was at his height of popularity during the mid-70's with the albums - Whatevershebringswesing, Bananamour and The Confessions of Doctor Dream.

Variously described as an English eccentric, a supreme musical raconteur, a pioneer of psychedelia, and a bon viveur whose inspiration came from fine food, wine and the sunshine of the Mediterranean, Ayers began his music career in the experimental progressive rock band The Soft Machine.

Closely associated with the Canterbury scene, The Soft Machine were in the vanguard of 'happenings'  in swinging London during the heady days of the 60's. At one gig bassist Ayers brought a motor-bike on-stage and placed a microphone to its engine while revving  it up.

The family tree of musicians who once played in The Soft Machine reads a bit like a Who's Who of Rock musicians. It includes Dave Allen, who left the band shortly before Ayers to found the Anglo-French group Gong, the saxophonist Elton Dean, the song-writer and drummer Robert Wyatt, and the now distinguished composer Karl Jenkins C.B.E.

Kevin Ayers contributions to The Soft Machine's first album includes the songs Joy of a Toy and Feeling' Reelin' Squealin' (Feb.1967) which became the B-side of the band's first single and one of the first ever psychedelic era recordings, it features Ayers in lugubrious and deep-toned mode. The album also includes Ayers' song Why are we Sleeping.

Why are We Sleeping is an important reminder that Ayers took the esoteric ideas of George Gurdjieff (1866-1949) with his view of human consciousness as little more than 'awake sleeping' quite seriously. There can be little doubt that both George Gurdjieff and Kevin Ayers would whole-heartedly have agreed with an observation made by Sir Thomas Browne, centuries earlier  -


surely it is not a melancholy conceit to think we are all asleep in this world.

The theme of dreams occurs frequently in Ayers' songs. Why are we Sleeping was later re-worked into a full-blown version on the album The Confessions of Dr.Dream (1974). In many ways however it was the song Stranger in Blue Suede Shoes which became Ayers' signature-song and demanded by audiences as an encore.

After leaving The Soft Machine, Kevin Ayers collaborated with some of the very best British musicians, two of whom have died in recent years, the soprano saxophonist Lol Coxhill (1932-2012) (an improvised session heard at Herringfleet Fayre’80 and a venue at St.Benedict’s, Norwich 1997) and David Bedford (1937-2011) keyboards and instrumental arranger on several of Ayers' albums. (World premiere of Bedford's Recorder Concerto at the Norfolk and Norwich Triennial Festival 1994).

A very young Mike Oldfield joined Ayers' band The Whole World in 1970 and he features in a guitar solo on the track Everybody's Sometime and Some People's All the Times Blues, while the piano-playing of Elton John can be heard on the album Sweet deceiver (1975). Above all others however, it was his long-term friend and music-partner Ollie Hansell (1949-1992) who recorded on a total of 11 albums  over an 18 year period  who contributed most to Ayers' sound. After Ollie Hansell's death in 1992 Ayers embarked upon one of his longer sporadic reclusive phases, releasing his last album, the first in 15 years, The Unfairground (2007) to critical acclaim.

In addition to his whimsical, melancholic and romantic persona embodied in his quintessential English song-writing, there's also an experimental strand to Ayers' music, notably in the tape-loop riffs of Song from a bottom of a well, the tape-montages of Shooting at the Moon and the extended concept track, The Confession of Dr. Dream (1974) which, with its varied moods, drug-induced paranoia and heavily-phased synthesizers epitomizes the best and worst excesses of 70's Rock music. A long-running humorous allusion to bananas can also be found in several Ayers lyrics.

The album entitled June 1st 1974 recorded at the Rainbow Theatre, London, seems a high water-mark in Ayer’s live performances. Sharing the bill with Brian Eno and ex-members of The Velvet Underground John Cale and Nico. Its now near common knowledge that John Cale was not particularly happy on the day of the Rainbow theatre performance, having discovered Ayers sleeping with his wife the day before.

Along with his lounge lizard and melancholic persona, there’s a strong trait of the eternal lover in both Ayer’s music and life. It’s no coincidence one of the few songs he recorded which was not penned by himself is a song made famous by Marlene Dietrich, Falling in love Again. How much persona and real-life inter-acted in Kevin Ayers psyche will never be known. He certainly played up to the role of  eternal lover and Casanova and epitomizes  in astrology the Leonine creative artist. Although little mention of any long-term relationship can be found in Ayers' biography, he is survived by three daughters.

Ayers was a long-time Francophile and lived on and off in the south of France over the decades. He also occasionally resided at Ibizia, a favourite resort and haunt of Gothic chanteuse Nico. The song Decadence on the album Bananamour is a portrait of Nico.

Ayers' music often accompanied my own love-trysts and the harmless and risky experiments conducted with Dr. Dream during my teens and twenties. Its also sadly now a reminder of a friend no longer alive who  first introduced me to Kevin Ayers' music, attending with me a gig by Ayers at UEA, Norwich in 1977, if my memory serves right.

Header quote is the opening line of Browne's A letter to a Friend
Quote-  tis no melancholy conceit  is from Religio Medici Part 2: 11

Thanks for beautiful text, as you wrote, it's sad when a man who had such an importance in the 1960s scene dies and I only ever find out one month ago! I still can't believe it, if someone from Big Brother died I'd know in half an hour...

I was so glad to see you mention Gurdjieff.
Please listen to Kevin's "Singing a song in the morning (Religious Experience)". The subtitle kind of describes the song, it's funny like just Kevin could be.

Peace and much love,
Evandro