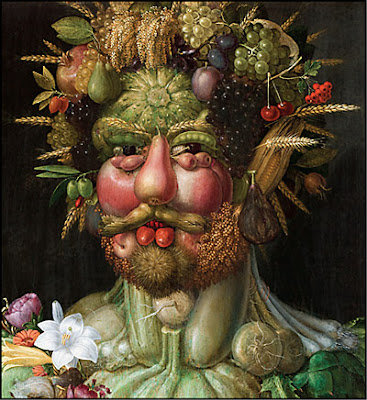 The Holy Roman Emperor Rudolf II (1552-1612) was an avid collector of art and a devotee of alchemy. When he relocated the Hapsburg court from Vienna to Prague he attracted many talents both scientific and artistic, including the Elizabethan mathematician John Dee, the astronomers Tycho Brahe and Johannes Kepler and skilled painters such as Bartholomeus Spranger, Adrian de Vries and Giuseppe Archimboldo.

Although nowadays Emperor Rudolf II is credited as being a major patron of the arts, in particular of Northern Mannerist art (one suspects that the four intriguing statuettes of the Layer Monument with their hidden esoteric symbolism would have appealed to Rudolf's taste) it's also been argued that his life-long collecting of art combined with his complete disinterest in politics and diplomacy contributed towards the collapse of the Holy Roman Empire and European political instability during the thirty years war (1618 -1648). A more positive interpretation of Rudolf II views him a major sponsor of the scientific revolution and an aspirant towards a united, polemic-free Europe.

Rudolf II also kept a menagerie of exotic animals, cultivated a botanical garden and collected a variety of curio's in what was to become Europe's most extensive 'cabinet of curiosities' or Kunstkammer. Rudolf's primary preoccupation however was the fabled philosophers stone of alchemy and he commissioned both scholars and alchemists in his quest. Foremost among scholars at the Prague court were the Paracelsian physician-alchemists Martin Rulands, the name of both father and son. Martin Ruland the elder (1532 -1602 ) compiled a dictionary of alchemical terminology, primarily orientated towards a Paracelsian and metallurgic nature. It must have been held in high esteem by Emperor Rudolf  for he conferred the status of nobility upon Martin Ruland junior (1569-1611) in 1608. Martin Ruland's definition of meditatio is a good example of how devout Hermetic philosophers such as John Dee and Sir Thomas Browne augmented their Christian spirituality.

MEDITATIO - The name of an Internal Talk of one person with another who is invisible, as in the invocation of the Deity, or communion with one's self, or with one's good angel.


Therefore I am so far from denying their existence, that I could easily believe, that not only whole Countries, but particular persons have their Tutelary, and Guardian Angels: It is not a new opinion of the Church of Rome, but an old one of Pythagoras and Plato; - R.M. Part 1:33

In Museum Clausum, Browne's bizarre inventory of lost, imagined and rumoured books, pictures and objects there can be found -

A noble Quandros  or Stone taken out of a Vulture's Head.

Although I've written on this before there's now the possibility of offering a link to the complete text of   Rulands Dictionary of Alchemy.

Besides, I'd not noticed before the similarity of the very opening line of Rulands Dictionary (at least when translated from Latin)  - In the deep consideration of the Hermetic and Paracelsian writings... to the opening line of  Urn-Burial - In the deep discovery of the subterranean world.

Although Ruland's dictionary primarily concerns itself with chemicals and metals it also includes psychological observations, in particular Paracelsus's definition of imagination -


IMAGINATIO --- is the Star in Man, the Celestial or Supercelestial Body

PHANTASMATA - are Apparitions which haunt desert places and the seashore, and speak with imaginative people. They are not diabolical, though they frequently cause terror.They are born of imagination.

Ruland distinguishes between different kinds of magic and stresses his Christian faith, condemning all enquiries outside of Christianity.


MAGIA, or MAGIC --- is a Persian word; in Latin it is Sapientia, i.e., Wisdom. It is twofold. The first is natural and permissible, the mother of true medicine, the secret lore of nature, hidden and concealed in the very centre, and compared with which all human reason is sheer foolishness. It is truly the gift of God, displaying to us the knowledge of things supernatural, and not proceeding from the inspiration of demons, wherein is no perfection or instruction. The other magic is unlawful, superstitious, and forbidden by the whole Church of Christ. It has the name of Necromancy; it is accursed, and nowhere to be tolerated. Consequently Wisdom has hidden her head.

Sir Thomas Browne has another connection to Rudolf II. He not only consulted Martin Ruland's Dictionary but also heard about the alchemy-loving Emperor at first-hand from his Norwich friend Arthur Dee when recollecting his life-story. In correspondence to Elias Ashmole, Browne stated -


I was very well acquainted with Dr. Arthur Dee, and at some time or other he hath given me some account of the whole course of his life: he gave me a catalogue of what his father Dr. John  Dee had writ, and what he intended to write, but I think I have seen the same in some printed books, and that catalogue he gave me in writing I cannot yet find.....

I have heard the Dr. say that he lived in Bohemia with his father, both at Prague and other parts of Bohemia. That Prince or Count Rosenberg was their great patron, who delighted much in alchymie; I have heard him affirm, and sometimes with oaths, that he had seen projection made and transmutation of pewter dishes and flagons into silver, which the goldsmiths at Prague bought of them. And that Count Rosenberg played at quoits with silver quoits made by projection as before; that this transmutation was made by a powder they had, which was found in some old place, and a book lying by it containing nothing but hieroglyphics, which book his father bestowed much time upon; but I could not hear that he could make it out.....

Dr. Dee was a young man when he saw this projection made in Bohemia, but he was so inflamed therewith, that he fell early upon that study and read not much all his life but books of that subject.

In a story of fathers and sons it should not come as too great a surprise that Browne's own eldest son, Edward Browne should be included here. Wherever Edward Browne travelled he acted as a herald and ambassador to his father's fame. Arriving in Vienna in 1668 on his travels through Europe, Edward was offered the opportunity to view Rudolf II's library of alchemical literature. According to Simon Wilkins, Browne's first editor -


Dr. Browne also received from Lambecius a curious catalogue of some hundreds of alchemical manuscripts, for the Royal Society, with the remarkably liberal permission to have any of them copied in Vienna, or even brought to England for transcription.

The status and understanding of alchemy has altered considerably throughout the centuries. From 19th and early 20th century editors of Browne's literary works such as Simon Wilkins and Geoffrey Keynes, both of whom possessed a poor, prejudiced view of alchemy as nothing more than a curious aberration in intellectual history, to C.G. Jung's seminal interpretation in the 20th century; it's earnestly hoped Sir Thomas Browne's relationship to alchemy in his laboratory enquiries and literary works is apprehended better by his editors in the 21st century.

Postscript: But what's this ? New York Review Books are to publish a critical edition by Stephen Greenblatt of Religio Medici and Urn-Burial  in May 2012, without The Garden of Cyrus ! Browne's legacy continues to be misunderstood and edited against the wishes of his artistic integrity. Only when they are read together do the two 1658 diptych discourses make their full associative impact upon the reader. Looks as if there's no  publishing provision against misrepresenting my cultural heritage !