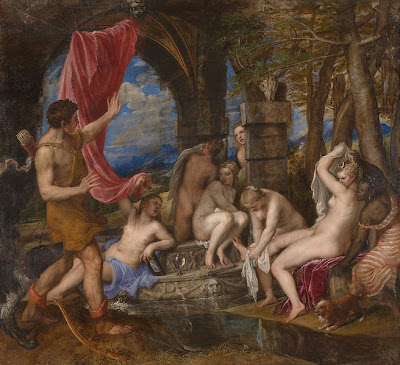 From March 3rd until April 15th as part of a Nation-wide tour organised by the National Gallery, Norwich Castle Museum is show-casing Titian's marvellous painting Diana and Actaeon.

The painting captures the moment when the hunter Actaeon stumbles into a woodland grotto where the goddess Diana is bathing. For his transgression seeing the chaste goddess of the hunt naked, Diana in a fit of embarrassed fury splashes water into Actaeon's face and transforms him into a stag. Unable to make his former identity known to his hunting pack Actaeon is chased and devoured by his own bloodhounds.

The Venetian artist Titian's late masterpiece Diana and Actaeon (1556-59) is the work of an artist at the very height of his powers. Commissioned for Philip II of Spain as one of a series of six mythological scenes, its worth remembering that Venice like Spain was during Titian's era, the centre of a vast Empire; included among the many goods which the sea-port traded were rare and costly pigments and dyes used to colour fabrics. Titian's masterful skills as an artist themselves became a highly sought-after commodity, in his life-time he was commissioned by Popes and Emperors.

On a canvas measuring 185 x 202 centimetres, Titian (c.1490 -1576) portrays the fatal moment of Diana and Actaeon's encounter. What captures the eye immediately is its rich colouration and detail. Against a vivid azure sky with a mountainous background, the action depicted in the woodland grotto includes various textures. An orange-striped sarong worn by an Ethiopian nymph alluding to the exotic, is contrasted to the domesticity of a lapdog which yaps at Actaeon's hunting hound. Water trickles and reflects the bathing nymphs startled at their intrusion.  A mirror and gleaming drinking goblet hint of famed Venetian exports. Resting upon a stone column there's a stag's skull, a portent of Actaeon's tragic fate. But above all else it's Titian's ability to paint the drama of the moment,  its the varied human postures and realistic skin tones which makes the painting come alive.

A quarter century after Titian completed his masterpiece, the Hermetic and Neo-platonic philosopher Giordano Bruno (1548-1600) in an essay entitled On the Heroic Passions (1585) interpreted the myth of Actaeon and Diana as a parable on the process of knowledge, stating-

'Here Actaeon represents the intellect, on the hunt for divine wisdom at the moment of grasping divine beauty'.

Just when Actaeon thinks he grasps Sophia (wisdom) in the glass of outer nature, lifting the veil from her lunar mystery, he himself becomes the victim or object of his own striving. Bruno philosophised on Acteon's fate -

'He saw himself transformed into that which he sought, and realised that he himself had become a much-desired prey for his hounds, his thoughts. Because he had actually drawn the godhead into himself, it was no longer necessary to seek them outside himself'.

For Giordano Bruno the hunter Actaeon is the new heroic man who, killed by his many hounds, is radically inverted. Actaeon's encounter with Diana, at first seemingly his down-fall and the end of his mortal life is for Bruno a transformation which allows Actaeon to experience the life of the gods and immortality. Actaeon's mortal life and final fate are interpreted by Bruno thus-

'Here, his life in the mad, sensuous, blind and fantastic world comes to an end, and from now on he leads a spiritual life. He lives the life of the gods'.

The consequences of mortals accidental caught up in the affairs of the gods and the resulting tragedy  places the Greek gods as being supremely indifferent to the fate of mortal man. There's no forgiveness, regrets, redemption or second chances available to those who encounter them and their implacable will. Bruno's optimistic interpretation of the myth of Diana and Actaeon is contrasted to Diana's more frequently acknowledged dark side. The English scholar Robert Graves noted that Diana in ancient Roman means 'bright' or 'heavenly', and that another name for Diana was Nemesis (from the Greek nemos, 'Grove') which in Classical Greek denoted divine vengeance for breaches of taboo.

Diana's hunting animal the dog represents her dark side. Her darkness shows itself in he fact that she is also a goddess of destruction and death, whose arrows never miss. She changed the hunter Actaeon, when he secretly watched her bathing, into a stag, and his own hounds, not recognising him, thereupon tore him to pieces. This myth may have given rise first to the designation of the lapis as the cervus fugitvus (fugitive stag), and then the rabid dog, who is none other than the vindictive and treacherous aspect of Diana as the new moon. [1]


A  possible Jungian interpretation of the myth of Diana and Actaeon is that of a fatal encounter with the anima. The hunter Actaeon's sudden, unprepared vision of the anima, that is, the feminine dimension within the masculine psyche, is one in which he's overwhelmed by its contents. Unable to assimilate or integrate the anima into his psyche, he's transformed into animal and devoured by his failure.

The element in the myth of Diana and Actaeon of the chaser being chased as vengeance is in hindsight somewhat applicable to  events of the modern era - as regards the activities of the papparazzi who once hounded Diana the late Princess of Wales. I'm sure H.R.H. Diana (1961- 1997) would have wished herself able to transform her own hunters into being the hunted. I think if I remember rightly, this myth was alluded to at her funeral in 1997.

The myths of the ancient world have inspired scholars and artists throughout the centuries. A full century after Titian completed his masterpiece, the lunar goddess Diana accompanied by her solar brother Apollo can be found casting light at the curtain-up of Sir Thomas Browne's extraordinary cabinet of hermetic phantasmagoria The Garden of Cyrus (1658)-

That Vulcan gave arrows to Apollo and Diana the fourth day after their Nativities, according to Gentile Theology, may pass for no blind apprehension of the Creation of the Sun and Moon in the fourth day. When the diffused light contracted into Orbs and shooting rays of those Luminaries.

The Creation myth which the seventeenth century Norwich philosopher alludes to originates from the pen of Roman author Hyginus ( 64 BC-17 AD) the author of the  Fabulae [2], a valuable source of mythology for scholars and artists. Browne not only possessed a copy of Hyginus's Fabulae but also of his better-known contemporary, the Roman poet Ovid (43BC -17 AD) author of Metamorphoses [3] and the probable source of Titian's reading of the myth of Diana and Actaeon. Browne's interest in the Roman poet must have been singular as no less than 15 book-titles by Ovid are listed in the 1711 Sales Auction Catalogue of his library. Like the Venetian artist Titian as well as hermetic philosophers such as Giordano Bruno and the German alchemical author Michael Maier (1568-1622), Sir Thomas Browne took an  interest in Greek myths for their profound psychological dimension. Another classical myth mentioned in his Discourse is that of Venus and Mars caught inflagrante delicato ensnared by Vulcan's network.

The consequences of mortals accidentally caught up in the affairs of the gods and the resulting tragedy places the Graeco-Romano gods as being supremely indifferent to the fate of mortal man. There's no forgiveness, regrets, redemption or second chances available to those who encounter them and  their implacable will, as the moonstruck hunter Actaeon discovers. The story of Diana and Actaeon as told in book 3 of the Roman poet Ovid's Metamorphoses was translated from Latin by John Dryden (1648-1700). Dryden's rendering of the story of transgression and transformation remains English poetry at its finest -

Now all undrest the shining Goddess stood,
When young Actaeon, wilder'd in the wood,
To the cool grott by his hard fate betray'd,
The fountains fill'd with naked nymphs survey'd.
The frighted virgins shriek'd at the surprize
(The forest echo'd with their piercing cries).
Then in a huddle round their Goddess prest:
She, proudly eminent above the rest,
With blushes glow'd; such blushes as adorn
The ruddy welkin, or the purple morn;
And tho' the crowding nymphs her body hide,
Half backward shrunk, and view'd him from a side.
Surpriz'd, at first she would have snatch'd her bow,
But sees the circling waters round her flow;
These in the hollow of her hand she took,
And dash'd 'em in his face, while thus she spoke:
"Tell, if thou can'st, the wond'rous sight disclos'd,
A Goddess naked to thy view expos'd."

This said, the man begun to disappear
By slow degrees, and ended in a deer.
A rising horn on either brow he wears,
And stretches out his neck, and pricks his ears;
Rough is his skin, with sudden hairs o'er-grown,
His bosom pants with fears before unknown:
Transform'd at length, he flies away in haste,
And wonders why he flies away so fast.
But as by chance, within a neighb'ring brook,
He saw his branching horns and alter'd look.
Wretched Actaeon! in a doleful tone
He try'd to speak, but only gave a groan;
And as he wept, within the watry glass
He saw the big round drops, with silent pace,
Run trickling down a savage hairy face.
What should he do? Or seek his old abodes,
Or herd among the deer, and sculk in woods!
Here shame dissuades him, there his fear prevails,
And each by turns his aking heart assails.

The symbolism of the Greek myth of Diana and Actaeon exerted an influence upon the alchemical imagination; its alluded to in an engraving by Matthaus Merian dated 1618.

The hunter Actaeon transformed into Stag, in attendance to Diana, can be seen in the lower right quarter of the cosmic mandala accompanying J.D.Mylius's Opus Medico-Chemico (above). The interdependence of Diana and Actaeon is highlighted in their both lending a hand to support Luna,  each also stands upon a wing of Aquila the Eagle.

Your knowledge of Browne and the breadth of the subjects he commented on never ceases to amaze me. This is a fine post.

Well thanking you kindly Stan. Comments such as yours make my day!

I agree with Stan. And isn't Dryden the perfect poet to do Ovid? I love them both.
Pat L