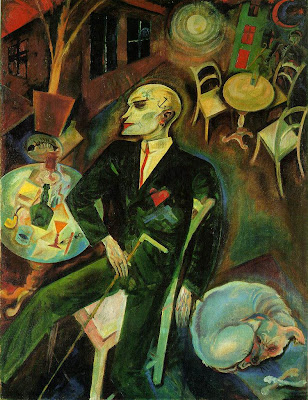 Another night of Saturnine blues, this time in the form of an early work by the German artist George Grosz, his The Lovesick Man (circa 1916) a painting reflecting dominant themes in Grosz's art - human nature and individual weaknesses, themes which have lost little relevance today.

George Grosz (1893-1959) was born in  and grew up during the prelude to World War I (1914-1818).  In protest against the nationalist fervour and rabid anti-British sentiment vocalized on ’s streets in the build-up to war, Grosz and fellow artist Jon Herzefelde (1891-1968) provocatively changed their names to an Anglicized form of spelling and pronunciation. Incidentally, there's a stylistic affinity between the pioneering photo-montage developed by John Herzefelde for political propaganda, one or two examples of which I've discussed before and the surreal humour of Terry Gilliam (b. 1940) the creator of cut-out, animated montages which were an integral part of the British TV series Monty Python's flying Circus (1969-71).

In his tense and unsettling portrait of a lovesick young man, George Grosz quite explicitly alludes to the Ursprung tragic hero of German romanticism, Werther, a character created by Johann Goethe in his Der Leidenschaft der Junge Werther (1774) known in English as The Sorrows of Young Werther.

In Goethe's phenomenally popular novella of the day, the sensitive and romantic hero Werther is unable to come to terms with the fact that his sweetheart has married another and that his love can never be consummated. He borrows a pair of pistols, and after writing a confessional letter and drinking a bottle of port, shoots himself. Goethe’s semi-autobiographical tale of unrequited love was accused of  encouraging copycat acts throughout

he empty room with a vacated table and chairs heightens the solitary sitter's loneliness. On his table there's the indulgences of a pipe and cigarettes along with a bottle, probably of alcohol. There's alsoThe anchor tattooed on his head hints of sinking or wallowing in unloved despair. The bones in the bottom right corner and fish bones symbolically allude to death. In the far background beside a blood-red sickle moon, the rib-cage of a skeleton can be seen. The theme of dissipation and death is developed further with a plant at the top corner which lacks either leaves or flowers. The gun placed next to the sitter's visible heart has strong symbolic associations, hinting that either suicide or a crime of passion is about to be committed.

Wrapped up in self-absorbed gloom Grosz's anti-romantic hero is capable of senseless acts. The message of Grosz's Marxist morality art- lesson seems to be - self-centred individuals who care only for their own happiness condemn themselves to a solitary madness; they do so at the expense of the well-being of society in general.

George Grosz witnessed the return of the defeated nation's troops to civilian life, the near breakdown of moral order and the subsequent violent conflict between the extreme left and right-wing in street fighting in post-war Berlin. The trauma of hyper-inflation added fuel to the social problems of crime, prostitution, drugs and the black market, endemic on Berlin's streets following World War I.

In January 1919 he was arrested but escaped imprisonment by producing fake identification documents which he'd forged himself. He joined the Communist Party of Germany (KPD) in the same year; however, unlike the Russian communist revolution of 1917, the German communist revolution of 1919 failed, due to various factors too complex to discuss here, not least, the assassination of Communist party leaders Karl Liebknecht and Rosa Luxembourg in January 1919.

In 1921 Grosz was accused of insulting the army and fined 300 German Marks. The court also ordered his satire on German society Gott mit uns (God with us) to be destroyed. Although Grosz left the KPD in 1922 he subsequently spent five months in Russia, meeting Lenin and Trotsky.

By 1924 economic and social stability in the newly established Weimar Republic allowed the opportunity for the creation of radical new art - Fritz Lang's film Metropolis (1927), Hermann Hesse’s novel of crisis and re-integration of identity, Steppenwolf (1927) the new music of Jazz and Kurt Weill spring to mind. The decadent, pleasure-loving years of the Weimar era and the rise of fascism are also the setting of Christopher Isherwood’s autobiographical novel Goodbye to Berlin (1939) which was later was adapted as the film Cabaret (1972).

By 1920 George Grosz had mastered his artistic powers to make powerful statements on the social instability and chaos of post-war Berlin. His art gives a glimpse into a society sharply polarized between rich and poor, and of a Berlin resembling a Dante-like inferno where individuals of varying degrees of power and corruption enact Berlin's social maelstrom on the streets of the metropolis. 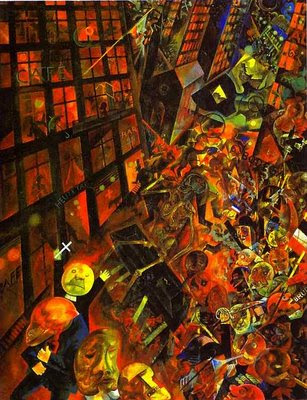 Grosz's low opinion of humanity is epitomised in the title of his 1946 autobiography A little Yes and a big No which he wrote once a naturalized American citizen. In a salutary lesson of how serious economic and social upheaval can affect the qualities of empathy with others and encourage selfish behaviour, the embryonic origins of fascism no less, he describes after World War I-

Tragically, although in 1954 Grosz was elected to the American Academy of Arts he continued to be home-sick and returned to Berlin, where he died in 1959 in an alcohol-related accident.

The work of George Grosz is certainly apropos at this time. His work in the USA was not focused, and, yes, he must have been, among other things, terribly homesick.

I saw an exhibit of German Expressionism at the Museum of Modern Art a few years ago, pretty sure some of Grosz’s work was displayed. German art from that time period seems rather melancholy and not very optimistic. I’m to afraid to even think of comparing present day America to post WW1 Germany…the same nationalistic fervor, devalued currency, and a failing government mixed with an already anti-intellectual and xenophobic culture; it just can’t play out well.

Although Grosz's works appear to be melancholic, it is interesting to note that the decade of the twenties was often hailed as a golden age in Germany, so much so that Kurt Tucholsky offered a satiric portrait of the Berliner (in Berlin! Berlin!).

His autobiography sounds like it's worth reading. Even though I studied the German Expressionists, I somehow missed out on learning much about Grosz, so I particularly enjoyed this piece.