The Wedding Feast of Cupid and Psyche 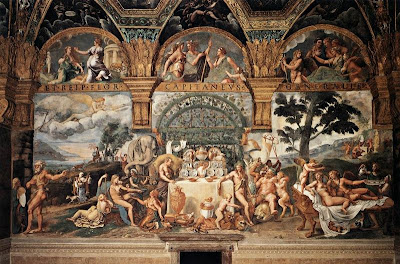 The Wedding-Feast of Cupid and Psyche by Guilio Romano.

All the evidence suggests the Italian painter Guilano Romano (1499-1546) was one the earliest artists who can be defined as Mannerist in creative outlook. Romano's The Wedding-Feast of Cupid and Psyche (1532) includes subject-matter of a mythological nature, its staged in a highly theatrical setting and uses unusual perspective as well as eroticism; all of which are characteristics associated with Mannerist art.

The Wedding-Feast of Cupid and Psyche was also painted by Romano's teacher, Raphael. It is however only one of several fresco's painted by Romano on the walls on the The lively and highly-stylized marriage-feast includes nymphs, fauns, satyrs, a drunken Silenus figure and what were at the time, rare and exotic animals, namely a camel and an elephant, both of which are centre-stage in Romano's fresco.

During the Renaissance new sources of myth such as Ovid's Metamorphoses and Hygenius' Fabulae became available to artists. It’s in the The Golden Ass by Apulieus, the sole surviving novel of the Roman-era, that the earliest literary source of the marriage of Cupid and Psyche can be found. Written sometime during the 2nd century C.E. the protagonist in The Golden Ass narrates upon his transformation into a donkey. The reader subsequently shares a donkey’s tribulations and perspective upon life which culminates during a ceremony of the cult of , in which the donkey-narrator eats a bunch of roses, resulting in his becoming human once more.

According to one retelling of the story of Cupid and Psyche, the princess Psyche was so incredibly beautiful that people begin to treat her like a goddess. The goddess Venus became jealous of her and asked her son Cupid to make Psyche fall in love with an ugly mortal. Cupid reluctantly agreed, however just as he was about to shoot one of his arrows, Psyche woke up, Cupid then accidentally scratched his own leg with an arrow-tip and fell in love with her.

Psyche's parents consult the oracle of Apollo, which tells them to prepare her for marriage as if for human sacrifice. The parents tearfully carry out the oracle's instructions. Psyche accepts her fate, saying she is eager to meet her beautiful new husband. Left to her fate Psyche is transported to a wood, where she finds a beautiful palace. She begins to live there, is served by invisible spirits and even has an invisible lover. However, he tells her that she is not allowed to look at him directly, and visits her only at night. Psyche hears the voices of her mortal sisters calling to her and she goes back to visit them. They hear her stories about her new life, and in jealousy urge her to look at her husband, raising doubts in her mind that he might be a monster. One night she uses a lamp to look at him, she sees that he is a god but startles him, resulting in his knocking the lamp and spilling hot oil on himself. He leaves her and goes back to the realm of the gods.

Psyche returns home and is unhappy. She visits temples and makes sacrifices to all the gods to find out who was her lover. The only god who will answer her is Venus. Psyche's lover turns out to be none other than the son of Venus, Cupid (i.e. Desire or Eros; Venus symbolizing sexual desire, while Psyche's name  originally meant soul). Psyche begs Venus to help her find Cupid.  Venus then imposes a series of labours on Psyche - including a descent into Hades. Psyche achieves these labours with help from divine assistants, including, in her last labour from Cupid. Her successful completion of the labours means that Psyche is at last able to marry Cupid officially - she becomes immortal and together Cupid and Psyche are united in eternity.

Romano’s fresco depicts the reward of Psyche's labours and the apotheosis of her adventures. Two servants at the wedding-feast (on the right of the detail below) exhibit highly-stylized and exaggerated postures, a distinct characteristic of Mannerism portraiture. Nudity and eroticism are also frequently encountered in Mannerist art, including Romano's portrayal of the lovers Cupid and Psyche reclining upon a couch. The male viewer's eyes are inevitably attracted towards the focal point of the shapely female buttocks of Psyche. Its worth noting in passing that the rare word Callipygous meaning well-proportioned or shapely buttocks is one of numerous neologisms introduced into the English language by Sir Thomas Browne. 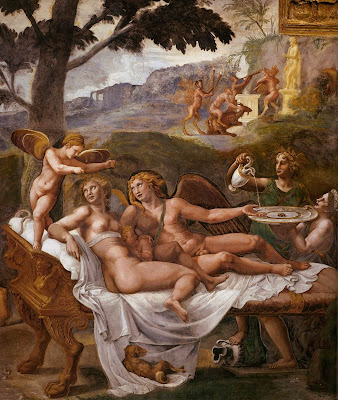 Romano is alluded to in William Shakespeare's late drama The Winter's Tale in which a  a statue by ‘that rare Italian master, Julio Romano’ of Queen Hermione, which in reality is the Queen herself,  in imitation of a statue. Art historians however have not looked kindly towards Romano. John Shearman 's definitive book on Mannerism (1967) contains only one fleeting reference to him, while the following extract from the 1913 Catholic Encyclopaedia illustrates the aesthetic prejudice existing until relatively recently towards Mannerist artists, condemning Romano with faint praise thus -

As an artist, Giulio has no originality; as a painter, he is merely a tempérament, a prodigious worker. His manual dexterity is unaccompanied by any greatness of conception or high moral principle...His lively but superficial fancy, incapable of deep emotion, of religious feeling, or even of observation, attracted him to neutral subjects, to mythological paintings, and imaginary scenes from the world of fable. Therein under the cloak of humanism, he gave expression to a sensualism rather libertine than poetical, an epicureanism unredeemed by any elevated or noble quality. It is this that wins for Giulio his distinctive place in art. His conception of form was never quite original; it was always a clever and "bookish" compromise between Raphael and Michelangelo. His sense of colour grows ever louder and uglier, his ideas are void of finesse, whatever brilliancy they show is second-hand. His single distinctive characteristic is the doubtful ease with which he played with the commonplaces of pagandom. In this respect at least, paintings like those of the Hall of Psyche (1532) are historical landmarks. It is the first time that an appeal is made to the senses with all the brutal frankness of a modern work.

Distinguished by such characteristics and marked by such defects, Giulio Romano occupies nevertheless an important place in the history of art. More than any other, he aided in propogating the pseudo-classical, half-pagan style of art so fashionable during the seventeenth century, and it is mainly through his influence that after the year 1600 we find so few religious painters in Europe. 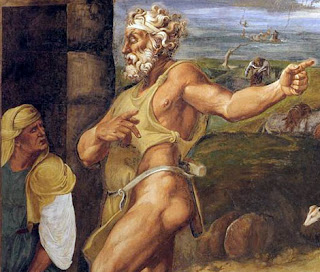 The ancient Greeks attempted to articulate profound moral and psychological truths through myth. Artists from Romano to late Northern Mannerist painters of the 1590's, Sprangler and De Vries, for example, were attracted to Greek myth for its ability to express psychological problems which Christian theology did not always have clear-cut answers to. The Greek myth of Psyche and Cupid in essence can be interpreted as expressing the complex and sometimes perilous relationship between individuation and sexuality. Its significant that in the 20th century the first seriously formulated psychoanalytic theory, Freud's Oedipus complex, was named after a character of Greek myth.

I have never been too interested in Greek mythology. But reading C.S. Lewis's, Till We Have Faces, a re-telling of the myth of Cupid and Psyche, has really helped change my attitude and understand what you say about the Greeks' use of mythology to grapple with human nature.

I hadn't read your post on the marriage of Cupid & Psyche before-- I was interested in your mention of Browne's introducing the term (if you will) "callipygous" into English. Do you mean that the word was coined by him (like electricity), or popularized by him? I've read of a statue beloved of the Greeks called the Venus Kallipygous," which I've not seen in person, but which seems to fit the bill in photographs. Just a sidenote, or endnote, to be sure-- good post, too, on the meteor in Russia. I enjoy your linking Browne, et. al., to the occasional news of the day topics. It's too often the case that belle lettres are considered only as relics of the past and not relevant to the world of today. Learning, as they say, is not cumulative through generations, but must be dug up again and studied-- a good case is Browne's urns which, it turned out, were saxon and not roman. But facts, I would argue, more often than not only get in the way of truth (in a sense, all facts can tell you is what something is not)! Anyway, I got a nice little paperback of Brown's writings & am eager to read his Garden, and Pseudodoxia again (at least the 1st book, which is what my ed. contains). I will have to look again at your posts that discuss Browne's Garden & see what I make of things from a closer vantage point.