Edward Browne at the Court of Emperor Leopold 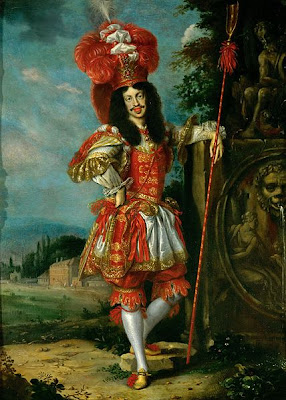 Emperor Leopold I in costume as Acis in La Galatea.

After his continental medical studies based at Padua, Montpellier and Leyden circa 1627-30, Sir Thomas Browne hardly ever left the city of Norwich, other than in a professional capacity, usually when visiting patients residing at one of the many ancient seats of the gentry scattered throughout Norfolk's wealthy farming hinterland.

In contrast to his father, Dr. Browne's eldest son, Edward Browne (1644-1708) travelled extensively before settling down to marriage and establishing a medical practise in London. Edward Browne was educated at Cambridge and became first a Fellow, and eventually the President of the Royal College of Physicians. He possessed characteristic traits associated with a youthful traveller - an insatiable curiosity towards the natural world including its people and their customs, the linguistic skills necessary to relate to all, and letters of introduction and relevant social connections to open doors and receive hospitality. Wherever Edward Browne travelled he acted as the ears and eyes of his stay-at-home father, keeping him informed in regular correspondence.

In total Edward Browne made three long journeys. In the first he travelled to Italy and came home through France. In 1668 he sailed from Yarmouth to Rotterdam visiting Leyden, Amsterdam and Utrecht, ending his journey at Cologne. His next destination was Vienna. Using the Hapsburg capital as a base he visited the mines of Hungary and travelled as far as Styria and Carinthia in southern Austria and Thessaly in Greece. Its in correspondence while in Thessaly that a strong reaction of parental anxiety and concern by his loving and indulgent parent's towards Edward Browne's proposal to travel as far as Turkey can be detected. His last European tour was in 1673, visiting Cologne, Aix-la-Chapelle, Liege, Louvain, Ghent and Bruges. Returning home, Edward Browne published a small quarto travelogue, the full title of which gives some indication of his wide travels - A Brief Account of some Travels in Hungaria, Styria, Bulgaria, Thessaly, Austria, Serbia, Carynthia, Carniola, and Friuli (1673). All three of Edward Browne's travelogues were published together in 1686. [1] 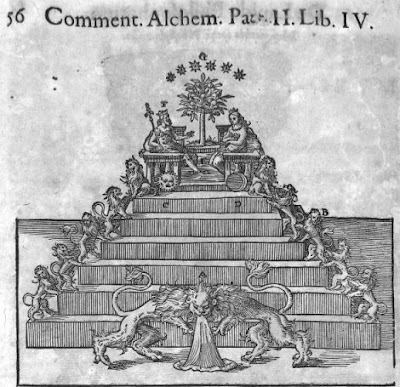 In the foreground of an illustration in Alchemia (1606) by Andreas Libavius (above) two lions clash, locked in fusion upon impact they share one conjoined head. Together they emit a powerful, vaporous blast. The two duelling lions are framed by a series of rampant lions ascending a stairway. At the top of the ziggurat pyramid sit King Sol and Queen Luna enthroned. Above, at the apex there is a verdant tree. Seven  planetary stars hover above it.

Andrea Libavius (1555-1616) was a German physician and university lecturer whose major work Alchemia (1597) became a European best-seller which went through several editions in his life-time. Although described as the first systematic chemistry-book, book two of its six books is entitled A dialogue on the Philosophical Mercurius, while book three discusses Azoth, an arcane name for the mercury of the philosophers and universal spirit of the world.  In both chapters all such mysticism is roundly condemned as detrimental to the true advancement of the science of chemistry.

Like many transitional figures in the late Renaissance Andreas Libavius was a Janus-like intellect. He advanced practical knowledge of chemistry while retaining a belief in the transmutation of metals. He vigorously attacked the ideas of Paracelsus as harmful to the development of chemistry, yet was well-versed in mystical Paracelsian thought himself. Libavius also reproduces in Alchemia John Dee's highly influential glyph in Monas Hieroglyphica, a series of theorems upon  the mystical symbol dedicated to Holy Roman Emperor Maximillian I in 1564.

The pages of Alchemia are a curious conglomerate on practical advice on how to prepare and use chemicals, in particular strong, corrosive acids, alongside illustrations on how to acquire the Stone of the Philosophers (above). Because acids were important for purifying, separating and cleansing metals, in alchemical literature they were often likened to lions for their dangerous and devouring properties. Sulphuric acid, also known as ‘oil of vitriol’ in the sixteenth century was popular amongst followers of the Swiss alchemist Paracelsus (1493-1541) while precipitation of silver from nitric acid solutions baffled and fascinated alchemists of the era.


The startling image of two lions locked in fusion is characteristic of Northern Mannerist art which often employed bizarre imagery from esoteric sources. The image can also be found in the frontispiece of the cosmic mandala of Opus medico-chymicum (1618) by J. D. Mylius (1583-1642) and in his Philosophia Reformata (1622) below. Such explicitly shared symbolism suggests the artist of Philosophia Reformata is directly alluding to the original two-in-one lion imagery of Alchemia. 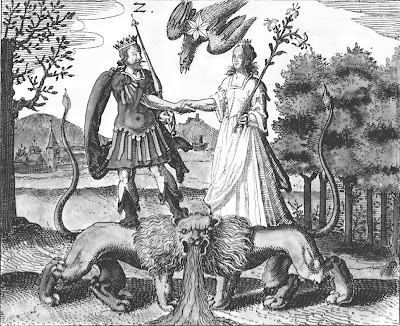 Symbolism involving the lion has a rich and complex history. Because it is essentially a symbol of the self, the lion has many, even contradictory meanings. At its highest level its symbolism is associated with Kingship, Nobility, Dignity, Bravery and the Hero. These archetypal qualities are reflected in the historical figure of  King Richard the Lion-heart and in modern times in the popularity of characters in films such as  The Wizard of Oz (1939) in which a cowardly lion quests for courage and Disney's animation, The Lion King (1994).  On a lower level the lion symbolically represents the animal passions, blood-lust, fierceness, violence and (an aural  pun here) raw nature.

The index to C.G. Jung's Mysterium Coniunctionis (1955-56) lists over 50 references to lions, including as a symbol for both Christ and the devil. Symbols can easily absorb such paradox for like the human psyche they are paradoxical in nature. The Lion features among the archetypes of the animal-circle, the Zodiac and in Christianity's major re-synthesis of astrology for its own purpose - in the four-fold symbol of the tetramorph the Lion represents Saint Mark and the strength of Christ. Because of its association with Kingship and Royalty the Lion is also emblematic of kingdoms as well as cities including Venice, Heidelberg and Norwich.

Whenever two lions are encountered in alchemical symbolism, often in the form of the Green and the Red Lion, the clash of opposites within the human psyche as well as the reconciled and united antagonists are evoked. In the extraordinary illustration in Alchemia rampant lions are seen ascending a stairway, a common symbol of spiritual ascent throughout world religion iconography. The scaled ascent suggests that the initial conflict may need to be repeated several times before reaching a final sublimation and harmony, as represented by Sol et Luna. With its bestial, lower nature and higher noble nature, the two lions is a fitting symbol of the warring factions at conflict in the human psyche, and exemplary of the depth and understanding of the human condition by alchemists with their  arcane symbolism. Not unlike the  the Mermaid, the two lions in their dual role of healing and harmful are a lesser-known symbol of the elusive 'deity' of alchemy, Mercurius.

Returning to the alchemists and early chemists of the late 16th and 17th centuries who investigated nature’s properties, one shudders to think of the possible great minds whose lives may have ended prematurely through dabbling in unknown, hidden hazards while experimenting. Such speculative thinking lays at the heart of the stoical meditations of Browne’s Urn-Burial.

Who knows whether the best of men be remembered, or whether other remarkable persons may have been forgotten ?

Browne and early scientists such as Libavius occasionally and unwittingly one suspects, courted harm in their examination of the physical properties of nature, which includes poisons and toxic substances, fungi and corrosive acids for example. The novice and would-be alchemist are warned of the hidden dangers in  alchemical experimentation in the tract Aurelia Occulta.

I am the poison-dropping dragon, who is everywhere and can be cheaply had....My fire and water destroy and put together; from my body you may extract the green lion and the red. But if you do not have exact knowledge of me, you will destroy your five senses with my fire. From my snout there comes a spreading poison that has brought death to many.[1]

The peculiar properties of the liquid-metal mercury in particular acted as a kind of psychic play-dough upon the imagination of the enquiring alchemist, as can be seen in Browne’s remarkable admission-

I have often beheld as a miracle, that artificial resurrection and revivification of Mercury, how being mortified into thousand shapes it assumes again its own, and returns into its numerical self. [2]

Throughout the pages of Browne's Pseudodoxia Epidemica  numerous experiments are recorded. Book two of his encyclopaedia includes investigation of the properties of jet, glass, porcelain, coral, magnetism, amber and static electricity.The wide-ranging nature of Browne's many experiments can be gleaned from the entry - Candle, one discharged out of a Musket through an inch board, while the entry - Philosophers Stone, not improbable to be procured reveals like Libavius before him, Browne was a Janus-like figure in the history of science, simultaneously assisting and anticipating advancements in the development of modern science, while also critically assessing ideas associated with western esoteric traditions. 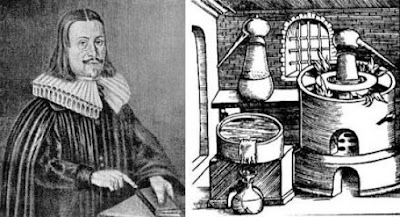 Although Andreas Libavius (above) and his influential chemistry book Alchemia isn't listed in the 1711 Sales Auction Catalogue of Thomas Browne and his son Edward’s libraries, it’s worth remembering that the fate of Browne’s library was vulnerable to abstraction for almost 30 years before finally being auctioned. And in fact Libavius is fleetingly mentioned by name by Browne, referencing one of his books in Pseudodoxia. It's highly unlikely that such an informer reader and scholar as Browne would not have known of Libavius and his influence upon the new science of chemistry.

It’s in book four of Alchemia that an illustration of the monument of the alchemical opus can be found. Its useful to juxtapose these two different versions of the diagram De Lapide Philosophorum to appreciate just how much symbolism can vary and alter within a short period of time in the alchemical imagination. Adam Maclean speculates upon their shared symbolism -

These are interesting and yet puzzling. On a superficial view they are very similar in structure, but when one examines the symbolic components in depth, they obviously are emblematising entirely different ideas. The imagery in places is so very different between the two emblems. I wonder what the source was for these two emblems. Were they entirely devised afresh as illustrations for Libavius' text, or were they taken from some earlier manuscript source ?

Both versions of Libavius' diagram on the Philosopher's Stone includes lions. A lion can be seen on the bottom sphere of the left version while in the version on the right the King is described as in the company of a golden Lion. The relationship between Libavius' two mysterious diagrams (below) which were first printed not in the first edition of 1597 but in the 1606 edition of Alchemia raises tantalizing chicken and egg questions surrounding the source of the Layer monument's rich and complex symbolism. 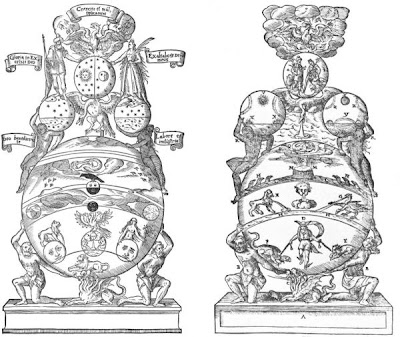 Books by Libavius include –

* Neoparacelsia (1594) an attack on the use of aurum potabile as a panacea.

* Rerum chymicarum epistola forma (1594) A collection of correspondence to German philosophers and physicians warning of the evils of the new Paracelsian iatrochemistry.


* Alchemia (1597) His most famous work includes advice on the preparation of strong acids alongside a declaration in the belief of the transmutation of metals.

* Defensio …alchymicae transmutatriae (1604)  an attack on the French physician Guibert for his denying of the truth of the transmutation of metals and a statement of belief of the Philosopher’s Stone being known to the alchemists.

*Alchymia triumphans (1607)  926pp. Libavius’s contribution to the confused battle and debate between supporters of Paraclsus, Hermeticism, Galen and Aristotle. 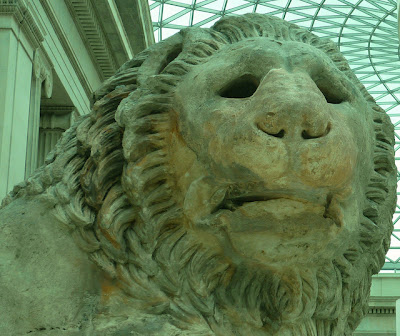