The statue in alchemy 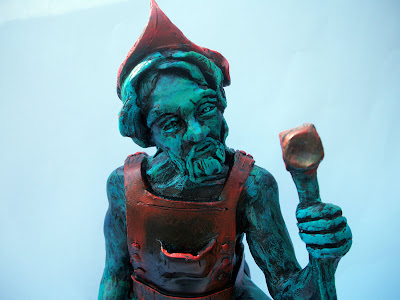 Statues have been associated with religion and spirituality from earliest recorded time to the present-day. 'From the Minoan Age and throughout the Mediterranean world of antiquity, statuettes of gods in human or animal shape were carved from terracotta, bronze, wood, or stone. They had religious significance and were deposited in graves or dedicated to the gods in shrines and in private homes, where they exercised a protective influence upon the dead, upon the community or upon the family. They were tutelary symbols'. [1]

The statue also performs a number of roles within the western esoteric traditions of hermeticism and alchemy. In the Corpus Hermeticum, a mixture of  Egyptian, Greek and Gnostic wisdom texts originating from the early Christian era, a dialogue between the mythic sage Hermes Trismegistus and Asclepius occurs. Trismegistus celebrates humankind’s ability for learning the art of “god-making” – making statues come alive by drawing divine powers into them, stating-

TRISMEGISTUS : But the figures of gods that humans form have been shaped from both natures - from the divine, which is purer and more divine by far, and from the material of which they are built, whose nature falls short of the human - and they represent not only the heads but all the limbs and the whole body. Always mindful of its nature and origin, humanity persists in imitating divinity, representing its gods in semblance of its own features, just as the father and master made his gods eternal to resemble him.

ASCLEPIUS : Are you talking about statues, Trismegistus?

TRISMEGISTUS : Statues, Asclepius, yes. See how little trust you have!
I mean statues ensouled and conscious, filled with spirit and doing great deeds; statues that foreknow the future and predict it by lots, by prophecy, by dreams and by many other means; statues that make people ill and cure them, bringing them pain and pleasure as each deserves’. [2]

After being damaged in an earthquake in 27 BCE  the eastern colossus of Memnon, one of two statues of the ruler Amenhotep III (14th century BCE) was believed to emit sound. Many travelers throughout antiquity travelled to  to visit Amenhotep’s statue in the hope of hearing it, including Roman Emperors. The Greek historian Strabo, the travelogue author Pausanias and the Roman satirist Juvenal, all claimed to have heard Amenhotep’s statue. Pausanias compared its sound to 'the string of a lyre breaking’, Strabo reported it sounding, 'like a blow', but its sound was also likened to the striking of brass or whistling.

The seminal Swiss psychologist C.G. Jung in his Mysterium coniunctionis (1956) observed - ‘the statue plays a mysterious role in ancient alchemy’[3].

Jung noted that the medieval cleric Thomas Norton (1433-1513) in his Ordinall of Alchemy depicts the seven metals/planets as statues. In the anthology of alchemical texts Aurora Consurgens (1566) Mother Alchemy or mater alchemia is portrayed as a statue of different metals, as are the seven statues in the writings of Raymond Lully. In the German Rosicrucian Michael Maier’s Symbola aureae mensae (1617) the protagonist on his peregrinations through the continents encounters a statue of a golden-headed Mercurius who points in the direction of .

Commenting upon the biblical verse, ‘And this stone, which I have set for a pillar, shall be God’s house’. (Genesis 28: 22) C.G. Jung theorized - ‘If our conjecture is correct, the statue could therefore be the Cabbalistic equivalent of the lapis philosophorum.’ [4] In agreement with the Gnostic’s teaching that the biblical Adam was a  'corporeal or 'lifeless' statue, Jung concluded his survey of the statue’s role in alchemy stating-

'The statue stands for the inert materiality of Adam, who still needs an animating soul; it is thus a symbol for one of the main preoccupations of alchemy'. [5]

Statues, as C.G. Jung detected, are often encountered in alchemical themed artwork and literature, frequently within the setting of a rose garden, sometimes speaking or guiding the questing adept, or even emitting an ethereal light from their eyes. The alchemical operations of thawing and warming in order to bestow life upon the inert, readily lent itself to the notion of statues coming alive. The alchemical author J. D. Mylius (c.1583-1642) in his Philosophia Reformata (1622) stated –'It is a great mystery to create souls, and to mould the lifeless body into a living statue.’ 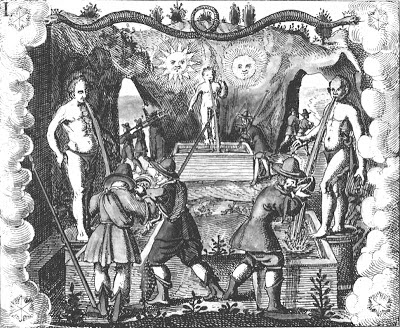 In the first of the illustrated series of Philosophia Reformata (above), a group of alchemists drink from statues which spout wine. When intoxicated with vinum nostrum (our wine) they walk into the dark corners of a mountain in order to begin the task of mining the prima materia from the rock, intending to refine its impure metals into gold.

There are other instances of statues becoming animated. and of  their relationship to the esoteric in the arts. In Shakespeare’s late drama The Winter's Tale  a statue by ‘that rare Italian master, Julio Romano’ of Queen Hermione comes to life. In reality however, the Queen only imitates a statue in pose before coming to life. [5]

‘in their groves of the Sun this was a fit number, by multiplication to denote the days of the year; and might Hieroglyphically speak as much, as the mystical Statua of Janus in the Language of his fingers’.

But perhaps one of the most dramatic of all tales of statues coming to life occurs in Mozart's opera Don Giovanni (K527). Mozart’s anti-hero, hastily returning home  at night after an amorous escape through a graveyard, encounters a statue. He dismissively invites it to dinner. In one of the most intense and psychologically loaded acts of the entire operatic repertoire, the statue of the Commendatore calls upon the Don, knocking loud at his door. Failing to persuade him to repent from his dissolute lifestyle, the Stone Guest requests the Don shake hands with him. Locking his hand in an icy, unbreakable grip, the Stone Guest drags the unrepentant Don Giovanni down into the infernal regions.

The many and varied roles the statue plays in the esoteric arts suggests that the four statuettes of Christopher Layer’s funerary monument in the church of Saint John the Baptist at Maddermarket, Norwich, with their thinly-veiled planetary and elemental symbolism, are superb examples of the statue’s role in spiritual alchemy; for, to repeat, the reviving of the inert and inanimate soul of man is fundamental to the alchemist’s quest to animate the spiritual man within.