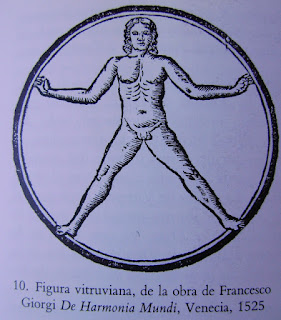 The ancient city of Norwich has a number of interesting associations with western esotericism. It was, for example, the birthplace of the Elizabethan dramatist Robert Greene (1558-1592) whose most famous play, The Honorable Historie of Friar Bacon and Friar Bungay (1590) re-enacts the tale of the medieval Franciscan friar Roger Bacon's magical feat of creating  an oracular 'Brazen' Head which talks and answers questions given to it.

Norwich was also where Arthur Dee (1579-1651) the eldest son of Christian cabalist and alchemist John Dee (1527-1608) chose to spend his retirement. Arthur Dee had accompanied his father in his travels across Bohemia as a child, and later served as a physician to the Romanov Czar Mikhail I for fourteen Moscow winters. Upon his retirement, Arthur Dee became a close associate of  the newly-qualified physician Thomas Browne.

The 1711 Sales Auction Catalogue of Sir Thomas Browne's library records that he owned an edition of  Giorgi's De Harmonia Mundi (1525) [1]. The very same edition of Giorgi's synthesis of Christianity, kabbalah and angelic-hierarchies was once also in the library of John Dee, who served as adviser and court astrologer to Queen Elizabeth before falling from favour.

In addition to being a Franciscan monk Giorgi (1466-1540) was also an international diplomat. When Henry VIII found grounds for divorce unobtainable he consulted Thomas Crammer. Crammer proposed to Henry VIII that he should consult lawyers and leading Jewish rabbis because different views as to the legality of marriage with a brother's widow are stated in books of the Old Testament. The Franciscan monk Giorgi was consulted as an expert in Hebraic studies. While in London, engaged in his diplomatic errand, Giorgi met and discoursed with the Elizabethan magus John Dee. There is thus an indirect link, but nonetheless a traceable link between the Renaissance founders of the Neoplatonic, Neopythagorean and Kabbalist traditions, namely Marsilio Ficino and Pico della Mirandola via the Franciscan monk Giorgi and his espousal of the Kabbalah to John Dee via his son Arthur Dee to Sir Thomas Browne.

The seminal British scholar of esoteric philosophy and its influence in western intellectual history, Frances Yates (1899-1981) wrote of Giorgi -

'Giorgi's Cabalism, though primarily inspired by Pico della Mirandola, was enriched by the new waves of Hebrew studies which Venice with its renowned Jewish community was an important centre. Cabalistic writings flooded into Venice following the expulsion of the Jews from Spain in 1492. Giorgi grafts Cabalist influence onto the traditions of his order. He develops that correlation between Hebrew and Christian angelic systems, already present in Pico, to a high degree of intensity. For Giorgi, with his Franciscan optimism, the angels are close indeed, and Cabala has brought them closer. He accepts the connections between angelic hierarchies and planetary spheres, and rises up happily through the stars to the angels, hearing all the way those harmonies on each level of the creation imparted by the Creator to his universe, founded on number and numerical laws of proportion The secret of Giorgi's universe was number, for it as built, so he believed, by its Architect as a perfectly proportioned Temple, in accordance with unalterable laws of cosmic geometry'.....In Giorgi's Christian Cabala, the angelic hierarchies of Pseudo-Dionysius are connected with the Sephiroth of the Cabala... The planets are linked to the angelic hierarchies and the Sephiroth'.

Giorgi's angelology was as Yates also detected, greatly influenced by the writings of the early Christian mystic Dionysus the Areopagite, who, for over a thousand years was believed to be one of Saint Paul’s converts in Athens. However, as with the identity and authorship of the Hebraic Zohar and the Corpus Hermeticum, both of which were once believed to date from the time of Moses, until detected as texts which were the product of a syncretic philosophy developed by Alexandrian Gnostic thinkers of the second and third century of the Christian era. Modern scholarship now recognises the true identity of Dionysus the Areopagite to be of a much later date, he is now thought to have been a Syrian monk of the 5th/6th C.E.

In his profoundly mystical book, De Celestia Hierarchia, Dionysus transposed the Neoplatonic hierarchy between man and the Godhead and established the idea of Angelic hierarchies in Medieval and Renaissance Europe into Christian theology. His account of angelic hierarchies and espousal of an inward way to a God which transcends all categories of rational thought was hugely influential. Dionysus' angelology is the basis of Giorgi's angelology. [2]

Throughout Giorgi's De Harmonia Mundi  there is a belief in a celestial, cosmic harmony which is based upon number, order and proportion and is is yoked to the angelic hierarchies. Giorgi's highly-Christianized Cabala exerted a powerful influence in Elizabethan England. Frances Yates proposed that Giorgi's highly poetical thought was attractive to poets, in particular, Edmund Spencer when penning his epic poem The Fairie Queene. As late as the seventeenth century  Sir Thomas Browne's own belief in Angelic hierarchies are writ large in Religio Medici (1643) in which the physician-philosopher states-

'We do surely owe the discovery of many secrets to the discovery of good and bad Angels.[3]...........Therefore for Spirits I am so farre from denying their existence, that I could easily believe, that not onely whole Countries, but particular persons have their Tutelary, and Guardian Angels: It is not a new opinion of the Church of Rome, but an old one of Pythagoras and Plato'. [4]

'For there is a musicke where-ever there is a harmony, order or proportion; and thus farre we may maintain the musick of the spheres; for those well ordered motions, and regular paces, though they give no sound unto the ear, yet to the understanding they strike a note most full of harmony. Whatsoever is harmonically composed, delights in harmony'. [5]

Given the fact that Arthur Dee bequeathed the contents of his library to Browne at his death in 1651, it's not improbable it may have been his father's edition of De Harmonia Mundi which he bequeathed to the Norwich physician. Alternately, if both John Dee and Browne each possessed their own individual edition of Giorgi's book, it would advance the hypothesis that both hermetic philosophers are closely linked in the western esoteric tradition.

John Dee and  Thomas Browne's interest in the highly Christianized form of Cabala as espoused by Giorgi also substantiates a hypothesis that the British tradition of Christian kabbalah are themselves each closely connected to the founders of the Florentine Humanist tradition, Marsilio Ficino (1433-99) along with his successor Pico della Mirandola (1463-94) both of whom were the foremost promoters of Platonic concepts, Pythagorean numerology and the Cabala during the Renaissance.