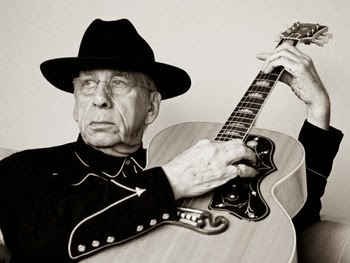 “I am a Norwich Man born and bred who has tried his best.”- A.C.

Throughout its long history the city of Norwich has produced a breed of hard-working, highly skilled and independent artisan craftsmen, the 'old master' artists, John Crome, John Cotman and Joseph Stannard for example. One must add to these illustrious names, the jazz and blues vocalist Albert Cooper, who's been performing in Norwich for sixty years now.

One evening, when visiting Albert at home, sharing a bottle of wine, we catch a recently made film portrait about him on Mustard TV recollecting his long life of music making. The short documentary includes Cooper's reminiscing on his first stage appearance aged 12 singing Christmas carols at the long-gone Hippodrome Theatre, his epiphanal moment when first hearing 'Black Anna’ and his memories of singing with her at The Jolly Butchers pub in the 1950's.

Albert Cooper shares his birthday not only with the great Anglo-American comedian Stan Laurel (1890 -1965) but also International Bloomsday. And in fact he's a great admirer of James Joyce’s masterpiece Ulysses (1922) ; there’s even a touch of the Leopold Bloom in Albert in Chris Bailey's film as he walks the streets of the city he loves while remembering the pubs, shops and smells of a Norwich long gone.

Albert Cooper’s two great lamentations are the madness of Norwich City Planners in their wanton vandalism masquerading as ‘development’ throughout the 1960's to the present-day, and the outcome of the Second Vatican Council in 1962. Nevertheless, hailing from one of Norwich's oldest Catholic families, the Roman Catholic faith remains the bedrock foundation of Cooper’s belief. Nurtured since a boy chorister upon the music composed for Mass by Gounod, Schubert and Mozart, he's been a committed Catholic his entire life, regularly attending Mass at the Roman Catholic cathedral of Saint John the Baptist’s at Norwich.

As the wine flows and the evening progresses, Albert, I discover, is an extremely engaging raconteur. Talking on Norwich in the 1950's in the days before TV and video when the Capitol, Odeon, Electric, Regent, Haymarket, Carlton and Noverre cinemas thrived, young Albert would sometimes visit the cinema three or four times in a week. These days he's a bit of a film buff and swiftly names Jean de Florette and Manon des Sources, Dr. Zhivago, Sabrina, the Ealing comedies of the 50's and, keeping abreast with modern trends The Lives of Others as favourite viewing. But above all, its David Lean's Brief Encounters (1946) with its soundtrack of the passionate and romantic music of Rachmaninov's 2nd piano concerto which is Albert's all-time favourite film.

Albert Cooper has performed at numerous venues throughout Norwich over the decades. He even co-managed his own music venue The Jacquard during the 60's and 70's where artists of the calibre of Paul Simon, Sandy Denny, George Melly and Ralph Mctell, among many others, once performed.

There’s a certain laid-back vigor to Cooper's own performing these days. His lifelong suffering from 'stage-nerves’ is testimony to his conscientious nature, wanting to give the audience his very best, which as a consummate artist, he invariably does. At present Cooper can be heard on a monthly basis at the Rumsey Wells. Visiting the pub on a night billed as a Blues evening, I catch his excellent interpretation of Bob Dylan’s Stuck in Mobile Blues, which I and others consider he performs as good, if not better than Dylan. I also realise he's older than Dylan himself ! Brilliantly accompanied by a driving Hammond Organ, by Albert's son Chris Cooper who is an accomplished musician and a distinguished, prize-winning Cambridge scholar in Jazz studies whose keyboard playing is an integral part of the Albert Cooper sound. Loyal band members bassist Owen Morgan and drummer Robert Masters also make no small contribution to the Cooper sound.

Albert's high reputation these days is such that when he hears of his lead guitarist Ronnie Dearing's illness (Get well soon Ronnie) his call for a stand-in guitarist is filled within hours. Of all the many songs he performs it is perhaps My Love will never Die which has become his signature song.

I was probably in an highly emotionally charged state when visiting the excellent Rumsey Wells pub on an evening billed as a Jazz night. On this particular evening Albert wears another hat from his diverse repertoire, that of the romantic crooner. He himself admits to having a strong romantic and even at times a melancholic and depressive streak. His highly developed ear for a good melody and meaningful lyric results in his continuing to expand his repertoire. This evening he sings for the first time,  I Read a Lot by Nick Lowe. Like healing balm to the soul, one senses that here is a man who sings lyrics with great insight and sensitivity.  Hopefully its a song which will be added to his already extensive repertoire. Other songs Albert sings that night include Lush Life, Sentimental Journey, Stella by Starlight and Jobim's Night of the quiet Stars.


The diversity of Albert Cooper's music-making can be gleaned from the fact that during the 1970's he inadvertently became the star of the show at Norwich's Maddermarket Theatre in performances of Old-time Music Hall, singing songs which his hairdresser father taught him as a boy. He also contributed his talents to the Keswick Hall Choir and UEA choir over the years and deeply regrets, like myself, the University of East Anglia's closing of its School of Music, a decision based supposedly upon financial considerations.  A golden opportunity lost for the far from impoverished University to contribute and integrate with its host City.

Cooper's musical likes are numerous, and an inventory of all his diverse tastes in music would be exhausting, however balladeers such as Dick Haymes his all-time favourite, along with Frank Sinatra, as well as the song-writing talents of Ray Davies, Justin Hayward and David Bowie deserve mention. In particular he admires the song-writing skills of Bowie, from his earliest song, the mysterious Man who sold the world (1969) to the Thin White Duke's latest song, Where are we now? (2013). Albert's bemused when I quote Bowie's lyrics which serendipitously allude to two of his favourite holiday destinations -

See the mice in their million hordes
From Ibiza to the Norfolk Broads.

Working at managerial level in tailoring and carpets until his retirement, in the words of his brother Kenneth, its probably just as well fame and fortune didn’t beckon big-time for Albert as they may have drastically shortened his life-span. In a statement typical of his modesty and self-deprecation, Cooper once declared-

"I am a realist and the grand illusion of greatness is a mirage, unless of course you are great which I am not."

In an world increasing mobile and rootless it can be difficult for some to appreciate the deep love and devotion a born and bred Norvicensian such as Albert Cooper has for his home City. Few people, however brief their acquaintance with Norwich leave it without admiration for its vibrant cultural and civic life. The world’s loss and Norwich's gain is now being re-balanced with many clips available on Youtube of Albert Cooper performing, some of which reveal him to be a master of small talk banter with his audience.

Once, when asked if he had any unfulfilled ambitions, Albert replied, "Not really". On reflection however, Cooper, who is a great admirer of American popular culture, confessed he would like to visit the home of the blues, Chicago, USA. To his surprise and delight tickets to Chicago were provided for him by a fan. It was while at Chicago, visiting a nightclub owned by brothers Phil and Buddy Guy, that Albert Cooper received what he considers to be the greatest compliment ever given to him. Buddy Guy declared that Cooper’s singing The Thrill has Gone was simply the best of all interpretations. Today whenever the octogenarian jazz and blues vocalist performs B.B.King’s song one senses he has a close identification and poignancy with its sentiment. A plain-speaking and honest man, Cooper may be said to join the ranks of Norwich literary figures who indulged in physiognomical observations, namely Sir Thomas Browne, Amelia Opie and George Borrow, when making the perceptive statement -

“In most cases when you are old and wrinkled and white that’s exactly how you appear, but if Black you have the look and style of a true Bluesman”.

'Who wants to be where they are in truth. Thank God for what you have, no matter how small, and in spite of how others seem to be more successful, more talented, more material goods, but still try, still do your best and reap rewards of being you, a total individual, no one else like you. We are all unique, its amazing!'

That evening when leaving Albert Cooper I notice that the view from his studio flat includes a impressive Cityscape in which both the Norman Castle and the Cathedral can be seen in direct alignment, believed by some to be an ancient lay-line of psychic energy, and that his door-number signifies none other than The Star in the Tarot cards. But even without such dubious and nebulous hints, one rock-solid fact I'm confident of, Albert Cooper is dearly loved far and wide by many today. Rightly named as the Godfather of the Blues in Norwich, his musical talents are quite simply one of the city's greatest treasures. Happy 81st birthday Albert !