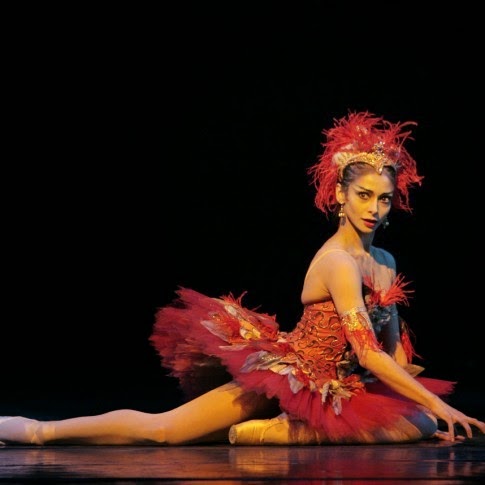 First performed in Paris in 1910 by the Ballet Russe company, The Firebird is as Russian as a Faberge egg or a Matryoshka doll.

The theatrical director of the Ballet Russe, the aristocrat and impresario Sergei Diaghilev, exploited a craze for all things oriental during the French era of the Belle Epoch. Diaghilev’s vision was to introduce Russian music and art to western audiences, and to produce new works in a distinctly 20th century style, in which costume and decor, dance and music all combine into one harmonious whole (Gesamtkunstwerk - total artwork). In order to achieve this total effect Diaghilev recruited talents such as the choreographer Michel Fokine, the designer Léon Bakst and the dancer Vaslav Nijinsky to his Ballet Russe company. After hearing Igor Stravinsky’s orchestral work Fireworks in 1909 he took the bold step of commissioning the then unknown composer to write a ballet score based upon a combination of Russian fairy tales.

With its mysterious opening bars of  double-basses conjuring up a magical fairytale world, and its extensive usage of chromatic scales borrowed from his teacher Rimsky-Korsakov, The Firebird is the only example in Stravinsky’s entire oeuvre of the colourful, neo-oriental school of Rimsky-Korsakov, one of  the 'mighty five' Russian Nationalist composers.  Following a brooding introduction, the music of the ballet follows in strict line by line to the action of the plot. Some of the most dazzling moments in the score describe the tussle, struggle and eventual peace between hero and Firebird. A lush, romantic apparition of the twelve princesses ensues, before the Infernal Dance in which Stravinsky provokes his audience's attention to sit up and pay attention to his genius. There follows a Lullaby with a jazz lilt to it. The ballet concludes with an apotheosis in which a stirring brass finale for a wedding occurs. Several versions of the orchestral score exist. In addition to the full 50 minute ballet score Stravinsky re-wrote a concise, concert-hall orchestral suite of  The Firebird  in 1911 and 1919 and once again in 1945.

Loosely-based upon several plots and characters from Russian folk tales the curtain rises on the enchanted garden where the magician Kostchei holds a dozen princesses captive. The princesses and a tree of golden apples are protected by a high fence. The firebird enters, intent on stealing one of the golden apples, but she is seized by Ivan Tsarevich, who has been following her. Their struggle, and her eventual subduing, is expressed as a pas de deux, and Ivan refuses to release her until she gives him one of her feathers. Armed with this talisman he is assured of her help should he ever need it. In the gathering dark one of the princesses, the beautiful Tsarevna, tells Ivan of her plight. They dance, and part at dawn. Ivan, however, fails to heed her warning not to follow her, and enters Kostchei's castle. A crowd of grotesque creatures rush out,, followed by Kostchei himself. the grotesques grovel before Kostchei, who approaches Ivan, intending to turn him into stone. Remembering the feather, Ivan waves it in Kostchei's face. The firebird appears, and forces the grotesques to dance until they are exhausted. She then reveals to Ivan that Kostchei's soul is contained in a great egg. Ivan takes the egg and dashes it to the ground. The magician dies, and Ivan marries the Tsarevna. [1]

The complex nature of evil and the difficulties which the hero must face in order to defeat evil are expressed well in the original Russian fairytale about the magician Kostchei. The soul of Kostchei is hidden separate from his body inside a needle, which is in an egg, which is in a duck, which is in a hare, which is in an iron chest which is buried under a green oak tree, which is on an island  in the ocean. As long as his soul is safe, he cannot die. If the chest is dug up and opened, the hare will run away; if it is killed, the duck will emerge and try to fly off. Anyone possessing the egg has Kostchei in their power. He begins to weaken, becomes sick, and immediately loses the use of his magic. If the egg is tossed about, he likewise is flung around against his will. Only if the egg or needle is broken, will Kostchei die.

Ever since the success of its first performance in 1910 with the ballerina Tamara Karsavina dancing in the physically demanding role of the Firebird, Stravinsky’s ballet has been a perennial favourite with audiences around the world. Such was its success that it initiated a twenty year collaboration between Diaghilev and Stravinsky. Two more ballets, equally brilliant, swiftly followed; the puppet drama Petrushka (1911) and the seismic anticipation of the World War, set in pagan Russia, The Rite of Spring (1913) a revolutionary work in 20th century music.

In essence the enduring appeal of The Firebird lies almost as much in its archetypal nature as a magical fairytale as its music and dance. The Swiss psychologist C.G.Jung noted that fairytales -  'tell us how to proceed if we want to overcome the power of darkness: we must turn his own weapons against him, which naturally cannot be done if the magical underworld of the hunter remains unconscious'. [2]

Jung argued that- 'If we wanted to explain the fairytale personalistically, the attempt would founder on the fact that archetypes are not whimsical inventions but autonomous elements of the unconscious psyche which were there before any invention was thought of. They represent the unalterable structure of a psychic world whose "reality" is attested by the determining effects it has on the conscious mind'. [3]

In Jung’s view - 'Fairytales seem to be the myths of childhood and they therefore contain among other things the mythology which children weave for themselves concerning sexual processes. The poetry of fairytale, whose magic is felt even by the adult, rests not least upon the fact that some of the old theories are still alive in our unconscious. We experience a strange and mysterious feeling whenever a fragment of our remotest youth stirs into life again, not actually reaching consciousness, but merely shedding a reflection of its emotional intensity on the conscious mind'.  [4]

'As in alchemy, the fairytale describes the unconscious processes that compensate the conscious, Christian situation. ..the fairytale makes it clear that it is possible for a man to attain totality, to become whole, only with the spirit of darkness, indeed that the latter is actually a causa instrumentalis of redemption and individuation'. [5]

'Myths and fairytales give expression to unconscious processes, and their retelling causes these processes to come alive again and be recollected, thereby re-establishing the connection between conscious and unconscious'.  [6]

Finally, Jung believed that - 'It is extremely important to tell children fairytales and legends, and to inculcate religious ideas into grown-ups, because these things are instrumental symbols with whose help unconscious contents can be canalized into consciousness, interpreted and integrated'. [7]

Stravinsky's Firebird is one of several works of classical music including Berlioz’s Symphonie Fantastique, Debussy’s Prélude à l'après-midi d'un faune, Sibelius' Swan of Tuonela, Brahms Piano concerto no. 2, Beethoven's Eroica Symphony, Mussorgsky's Pictures at an Exhibition, Shostakovich's 5th symphony, Rimsky-Korsakov's Scheherazade and Cesar Franck’s Symphony in D minor, which I ‘discovered’ when a teenager through 12" vinyl discs during the 1970's.

'A mass of riotous colour and swirling bodies, the Infernal Dance (Youtube clip above) which brings the entire company into Firebird could feel, occasionally like being caught up in the spin cycle of a washing machine. Garments everywhere, whirling fabric, blurred colours...' [8]