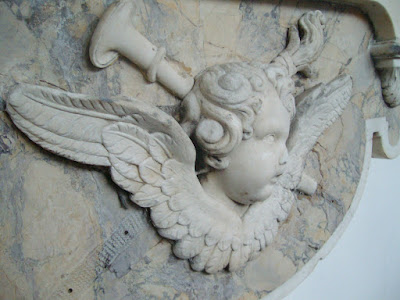 Among the many unsung treasures in Norwich's three dozen medieval churches there are an extraordinary variety of well-executed and beautiful funerary monuments. These include the seventeenth century monument to Christopher Layer at the church of Saint John the Baptist, Maddermarket, and those to Sir John Suckling and Robert Suckling at Saint Andrew's. A number of splendid eighteenth century funerary monuments, in particular those by the sculptor Thomas Rawlins (1727-1789) can also be seen in Norwich's medieval churches.

Thomas Rawlins died on March 18th 1789, 227 years ago today. Although from a humble background as the son of a weaver, he was trained by a London sculptor, speculated to have been Sir Henry Cheere. In 1753  Rawlins advertised himself as a carver and mason of monuments and chimney pieces, both ancient and modern. He worked as a monument mason at a yard on Duke Street in Norwich and had a relatively long career, active from circa 1743-81. Rawlins specialised in coloured marble and was a leading member of 18th century 'Norwich school' of stonemasons.

Ranking high as a sculptor in the view of  the art historian Nicholas Pevsner, Rawlins, like other English funerary masons, followed artistic trends which originated from the work-yards of London stonemasons and sculptors. Following in the foot-steps of London trends, a stylistic change in Rawlins sculpture can be seen, from a late Baroque Rococo to Neoclassical in style. This significant stylistic change is well-illustrated by two funerary monuments at St Andrew's church; the first to John Custance (circa 1756) is intricately decorated with sweeping and detailed flourishes; in complete contrast the monument for Richard Dennison (circa 1767) is uncluttered and opts for linear simplicity in geometric form, including oval and circular arches.

This transition of artistic styles from that of late baroque to Neo-classical, occurs sociologically, from the rule of the ancien regime to the various movements which advocated and even installed Democratic rule; its a radical transition which can even be expressed in terms akin to keyboard instruments with the dominance of music written for the harpsichord giving way to the new voice of the pianoforte during approximately 1730-1770 . 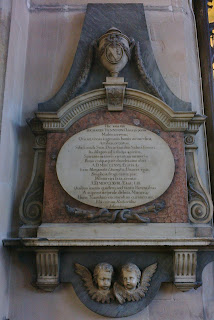 In addition to specialising in coloured marbles, Rawlins seems to have had a predilection, held in common with his patrons, for putti, some of which are colossal in dimension, at least three times the size of any normal-sized baby. Rawlin's monuments for Hambleton Custance at St. Andrew's (left) and for Timothy Balderstone at St. George's (right) are both over 5 metres height in total. 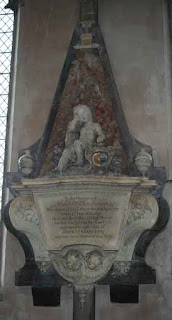 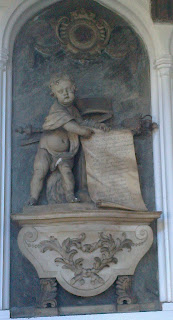 Later monuments by Rawlins, such as the one for Robert Rushbrook (1705-81) in the church of Saint John the Baptist at Maddermarket, (detail top of post) are considered to display a great awareness of neo-classical motifs. However, its his monument for Sir Thomas Churchman at St. Giles which is considered to be his finest work. The monument features a sarcophagus upon which are carved allegorical figures representing Vanity, Time and Judgement, a structurally incomplete Egyptian pyramid  is in its background.

Rawlins also practised as an architect. His designs, like those of his contemporary Thomas Ivory, the architect of the Octagon Chapel (1756) of Norwich, were Neo-Palladian in style. In 1768 he published his, Familiar Architecture: or Original Designs of Houses for Gentlemen and Tradesmen; Parsonages; Summer Retreats; Banqueting-Rooms; and Churches. subsequently reprinted in 1789 and 1795. Remarkably, Rawlin's book remains in print today.

Rawlins' reinforcement with ironwork of the south aisle of the church os Saint John the Baptist at Maddermarket, in 1772, became the subject of satirical verse, in what was the first English provincial newspaper, the Norwich Mercury.

Curiously, a stone inlay in the floor of the aforementioned church describes him simply as an architect; however, Rawlin's legacy can be seen in various Norwich churches today, in particular at Saint Andrew's, where no less than three of his funerary monuments can be viewed.

This post is developed from an earlier Wikipedia contribution.