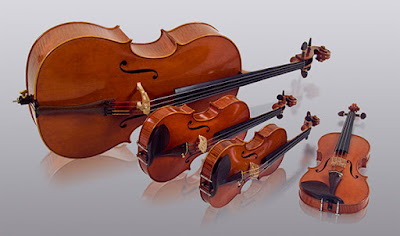 The intimacy and privacy of the String quartet became a favoured medium for the Russian composer Dmitri Shostakovich (1906-75). His cycle of fifteen String Quartets  may be considered equal in profundity, wit and technical brilliance to Beethoven's String Quartets.

Although sometimes evoking a Kafkaesque atmosphere of anxiety, dread and fear induced by life in the Totalitarian era of Stalin, (Shostakovich on a number of occasions was under extreme pressure to conform to Communist Party aesthetics), nevertheless the composer managed to preserve the highest degree of artistic integrity in his String Quartets in which the 'Other Shostakovich', someone quite separate from the 'Official' State War hero and composer of the patriotic  Leningrad' Symphony, are  featured.

'The 'other Shostakovich' was a gnomic, cryptic, secretly impassioned figure who spoke through chamber music (twelve string quartets from 1948 on) .... The string quartet became his favourite medium: it gave him the freedom to write labyrinthine narratives full of blankly winding fugues, near-motionless funeral marches, wry displays of foolish jollity, off-kilter genre exercise, and stretches of deliberate blandness. One of the composer's favourite modes might be called "dance on the gallows" - a galumphing, almost polka-like number that suggests a solitary figure facing death with inexplicable glee'.[1]

'Like the Second and Third Quartets, the Fifth begins with a sonata form movement with exposition repeat. In its virile Beethovian energy, this magnificent movement resembles the first movement of the Second Quartet, with a sense of militant resistance, which had not appeared in Shostakovich's music since that work eight years earlier, though the second subject is a graceful waltz. Segueing to its central slow movement, the quartet retreats into an icy muted B minor. ....this threnody for crushed aspirations and deformed lives also recalls the 'ghost music' of the Third Quartet'.


In contrast to Beethoven's expanding the canvas for a String Quartet, Shostakovich in his 7th String quartet (1960) telescopes the format, returning to the length of an early Haydn String Quartet.  Lasting little more than 12 minutes, the length of many single movements of a Beethoven Late quartet. It includes acerbic wit and fiercely contrasting dynamics, along with an enigmatic opening phrase.


Known in the USSR as the 'Dresden' quartet, the Eighth Quartet was composed in three days during the composer's visit to the ruined city of Dresden in July 1960...Shostakovich had supposedly been so shocked by the devastation he saw that poured out his feelings in music, inscribing the work 'In memory of the victims of fascism and war'. .....the composer told friends that, far from concerning the dead of Dresden - victims not of fascism but of Western democracy working to Soviet military request - the quartet was actually a musical autobiography. 'Everything in the quartet ais as clear as a primer. I quote Lady Macbeth the First and Fifth Symphonies. What does fascism have to do with these ? The Eight is an autobiographical  quartet, it quotes a song known to all Russians: "Exhausted by the hardships of prison".

Alex Ross notes -  'The personal motto D S C H, which sounded so pseudo-triumphantly in the finale of the Tenth Symphony, is woven into almost every page of the Eight Quartet. It appears alongside quotations, from previous Shostakovich works, including the Tenth Symphony, Lady Macbeth, and the First Symphony, not to mention Tchaikovsky's Pathetique, Siegfried's Funeral Music from Gotterdammerung, and the revolutionary song "Tormented by Grievous Bondage". .....The final pages of the score trail resemble in a curious way, the mad scene in Peter Grimes , in which the fisherman is reduced to singing his own name : "Grimes! Grimes ! Grimes!". It is the ultimate moment of self-alienation' [3]

During the 1960's Shostakovich became a friend of  the composer Benjamin Britten (b. Lowestoft 1913-76). Both composers shared a liking for the music of Gustav Mahler,  both worked within the framework of Western tonality and respected each other's work sufficiently to quote each other in their respective compositions. The theme of the Outsider in society is prominent in both men's music, not least in Shostakovich's later string quartets. Both composers also died tragically prematurely.

In his highly recommended book on 20th century music and its relationship to politics, 'The Rest is Noise: Listening to the Twentieth Century', the musicologist Alex Ross provides the historical details on the two composers friendship thus-

'In September 1960, when Dmitri Shostakovich came to London to hear his Cello Concerto played by Mstislav Rostropovich, he was introduced to Benjamin Britten. In the following years Britten and Pears made several visits to Russia and the friendship between the two composers blossomed when Britten and Pears traveled to A Soviet composer's colony in Armenia, where Rostropovich and Shostakovich were staying.

Ross notes -'Despite obvious differences in temperament- Britten was warm and affectionate with those whom he trusted, Shostakovich nervous to the end - the two quickly found sympathy with each other, and their connection may have gone as deep as any relationship in either man.

Britten had long admired Shostakovich's music, as the Lady Macbeth-like Passacaglia in Peter Grimes shows. Shostakovich, for his part, knew little of Britten's music before the summer of 1963, when he was sent the recording and score of the War Requiem. He promptly announced that he had encountered one of the "great works of the human spirit". In person he once said to Britten, "You great composer; I little composer". Britten's psychological landscape, with its undulating contours of fear and guilt, its fault lines and crevasses, its wan redeeming light, made Shostakovich feel at home.

Both men seem almost to have been born with a feeling of being cornered. Even in works of their teenage years, they appear to be experiencing spasms of existential dread. They were grown men with the souls of gifted, frightened children. They were like the soldiers in Wilfred Owens poem, meeting at the end of a profound, dull tunnel.

In 1969 Shostakovich capped the friendship by placing Britten's name on the title page of his Fourteenth Symphony.

'The creations of Shostakovich's sixties, a time of increasingly deteriorating health, form a group of their own,....Here, turning away from confrontation with the State and dogged by the possibility of sudden death following his first heart attack in 1966, he focused with growing austerity on eternal and universal subjects: time, love, betrayal, truth, morality and mortality. Withdrawn and cryptic, these compositions are often compared with Beethoven's own late period. ......It  is as if  the composer has seen too much evil, suffered too much duplicity. His withdrawal from the world in his late works seems at least partly to have been founded on a growing mistrust of humanity per se. From those who knew him it seems that Shostakovich's philosophy, at its simplest, was to value the individual and fear the crowd, the heartless collective. Like Britten, he ponders in old age a kind of Noh theatre of moral parable, chiseling away the superfluous to expose the essential human beneath, bereft of its camouflage of vanity and pretence.....The desolate psychological terrain of Shostakovich's late-period music overlaps everywhere with that of Britten's. [5]

Another reviewer of Shostakovich's String Quartets states- 'The quartets are neither minor in their scope or ambition. They all have something to say about the nature of human existence and folly, collectively or as individuals. There are brief moments, more perhaps towards the later quartets, where bitterness and dark intimations of mortality give way to a peaceful acceptance.  There are no happy endings, only surrender to the inevitable, alone in the knowledge of the truth of what we are and what we have been'. [6]

It's been suggested  that Shostakovich, faced with close scrutiny from Officials, adopted the role of the yurodivy or holy fool in his relations with the government; this persona features in his String Quartets. Austere, increasingly terse and morose, they also bear witness to the intense emotional strain the composer endured throughout his life in compliance with the Soviet authorities. Far from being exclusively expressions of the Russian Soul, they're recognisable as giving voice to the loss of Faith, alienation and existential angst suffered by many in the West in the twentieth century.

The most detailed and scholarly online writings, far surpassing my effort, on each and every one of Shostakovich's Fifteen String Quartets can be found here.