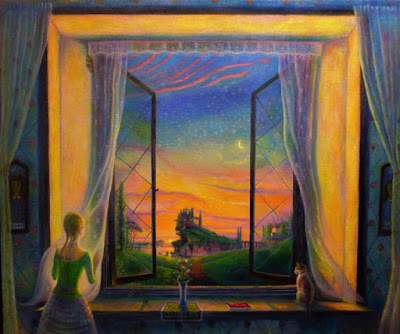 The unique combination of portraiture and North Sea magic realism art by the established artists Mark Burrell and David Gooch is currently on show at Skippings Gallery, King Street, Great Yarmouth, until the end of  September.

This is the very first time the two friends have exhibited together since first meeting twenty years ago, although they've given each other constructive criticism of each other's art throughout the decades. Indeed, Mark Burrell says of David Gooch - ‘He has one of the sharpest pair of eyes I know and can always spot a weak point in a painting even if its only half a centimetre wide’.

In a harmonious synchronization of perspective and geometry, imagination and intimate feeling, Burrell’s relatively large-scale work Girl at the Window (90 x 80 cm) depicts a young girl with her back to the viewer, caught in a moment of quiet reflection, gazing upon an extensive landscape. She looks towards the setting sun and a small tidal island; a craggy rock with a house, gothic in architectural style, is perched upon its grassy knoll. Surrounded by an extensive estuary, a viaduct connects island to mainland. A crescent moon appears in the twilight.

As often in his art, a spectacular cloudscape is depicted. Though highly-stylized, Burrell's cloudscape is based upon close observation by the artist, in particular, the refractive light upon clouds at sunset. The setting sun, located with pinpoint precision on the horizon, greatly enhances the carefully calculated perspective of the canvas. A cat and  flowers placed in a vase upon the window-sill emphasise the feminine domesticity of the scene. A slightly darker element, linking the gothic architecture of the mysterious island house occurs in the form of a pair of shadowy, twin portraits which frame each side of  window.

Explaining the long evolution of his Girl at the Window, Burrell states-

‘It was reworked from a canvas 40 years ago. The Salvador Dali influence has now gone, the Dali bread became a girl, and the Vermeer jug turned into a cat. The figure just grew, it wasn’t there before in the old painting; it was isolated, full of decay. There are  paintings by Caspar  David Friedrich and Salvador  Dali entitled ‘A Girl at Window’, but neither of these has the shape or colour or feeling I was after, which was all about light, and the landscape being inside and outside being connected, not solitary.

‘While Friedrich’s Girl at the Window deals with the body in relationship to a cold interior, I, however, was thinking more about the psychology of landscape connecting inner and outer space, and of course a landscape without a figure can create such silence in a work.  This is nature abundant and happy meaning,  no longer afraid and depressed but thankful to be alive in the world, so it’s a landscape about mental states, then and now, and is autobiographical.’

Symbolically speaking a view from a window is a change or alteration in perspective (from a closed wall  indoors to being presented with a framed view) and hence its suggestive of an alteration or change of awareness or consciousness, a necessary adjutant to all mental and spiritual growth.

A tentative Jungian interpretation would suggest the canvas alludes to a psychological achievement, that of recognition and integration of the anima  (inner feminine within male psyche) to the self. This is expressed in the painting's imagery in the relationship between the unknown girl gazing upon the house perched upon a rock, its central focal point being mandala-like in the fantastic landscape.

The island, in particular, one composed half of rock and half of architectural design is a good symbol of the Self, which also consists of the known and unknown, of raw nature and refined culture.

Not only is Burrell familiar with Jungian psychology but also with a 20th century English author who wrote extensively on spiritual matters, stating-

"I've read a couple or three of Aldous Huxley's novels, every page rich and involved. His last novel 'Island' (1962) I read whilst actually on an island, not realising at the time how related it was to Buddhism, and the invasion of Tibet. A brilliant book. I  think he described meditation once as the poor man's snooze, but later came to realise its benefits."

The unusual topographical features of St.Michael's mount in Cornwall and St. Michel's mount in Normandy, France are landscapes which are suggestive of spiritual sanctuary, as does the fantastic landscape and intimate vision of Mark Burrell's Girl at the Window. 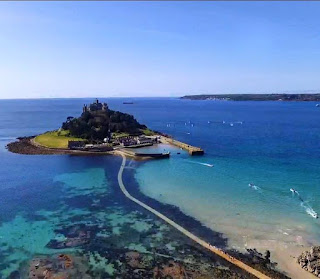 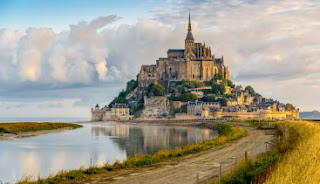 Mark Burrell’s distinctive tonal palette, skilful draughtsmanship  and meticulous attention to detail is clearly visible in each and every one of the paintings in this Skippings exhibition. Equally adept in realism, as his portraits demonstrate, as in his realisation of magical landscapes inhabited by strange, yet somehow familiar characters, the wide spectrum of Burrell’s subject-matter now ranges from his native Lowestoft, to the caricaturing of international politics, to the highest flights of imagination, creating a personalised microcosm in which emotion and feeling are heightened through a highly original colour palette; a flourishing field of vision no less.

As the Spanish cultural historian  Ortega Y Gasset states - 'Art has no right to exist if, content to reproduce reality, it uselessly duplicates it. Its mission is to conjure up imaginary worlds. That can only be done if the artist repudiates reality and by this act places himself above it. Being an artist means ceasing to take seriously that very serious person we are when we are not an artist'. [1]

Burrell's portrait of fellow leading artist of the North Sea magical realism, Peter Rodulfo, captures not only the external features of the artist's ageing eyes, resultant from decades at the easel, along with his high-cheekbones, hinting of Rodulfo's remote Slavic ancestry, but also the artist's well-known inner qualities of warmth, humanity and sense of humour.

Others portraits by Burrell in the Skippings exhibition include a portrait of David Gooch, a self-portrait and a portrait of his partner, Donna. His understanding of the art of portraiture is exemplified in his stating -

‘Portraits for me are all about the character of the sitter, the inner life, without that element a portrait is just a technical ability.  I love the flesh, soft parts, bone gristle, reflections in eyes, texture, and how much a face can change in just a day, changing and shifting form with different emotions’.

At the private viewing on Saturday 22nd September I finally meet David Gooch. Genial and  informative, like Burrell, Gooch is  also Lowestoft born and bred. I'm instantly surprised at the wide diversity of Gooch's exhibited art. Easily equal and gifted to Burrell in technique and style, Gooch's most recent paintings are also in the genre  of portraiture. More than  simply factual accounts of the face,  they show something of the inner workings of the individual. His portrait of his friend Mark Burrell depicts the artist at the easel wearing his studio hat, worn whilst working to protect his eyes from intrusive glare.

As the art-historian Ortega Y Gasset once more, states-

A traditional painter painting a portrait claims to have got hold of the real person when, in truth and at best, he has set down on a canvas a schematic selection, arbitrarily decided on by his mind, from the innumerable traits that make a living person. What if the painter changed his mind and decided to paint not the real person but his own idea, his pattern, of the person ? Indeed, in that case the portrait would be the truth and nothing but the truth, and failure would no longer be inevitable. In foregoing to emulate reality the painting becomes what it authentically is: an image, an unreality' [2]

In David Gooch's and Mark Burrell's respective portraits of the two leading artists of North Sea Magical realism, a valuable record of two mature artists, now approaching the peak of their artistic development is documented.

In addition to his portraits, a number of landscapes by David Gooch  are included in the exhibition.  Gooch's sharp eye for landscape scenery has been inspired and developed through his travels to Cornwall, Yorkshire, Spain and France. His tonal palette, predominantly of cool colours, contrasts well with Burrell’s heightened colour in this exhibition, but whether cool or illuminated, what unites Gooch's art with his friend Mark Burrell's, is a shared love of portraiture and of landscape,  real and fantastic.

As ever, its worth stressing, digital photos simply don't give anywhere near the full flavour of  a genuine art-work in either colour, dimension or ambience even. Far better to visit Skippings gallery in Great Yarmouth before September ends, to acquire a true appreciation of these two artist's works.

[1]  The Dehumanizing of Art and other essays on Art, Culture, and Literature. Jose Ortega Y Gasset Princeton University Press 1968
[2] Ibid.