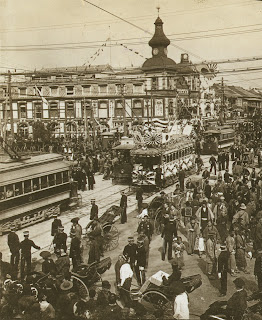 The physician-philosopher Thomas Browne (1605-82) can truly be said to have achieved worldwide fame with his inclusion in the Japanese author Natsume Sōseki’s novel Sanshirō (1908-09).

Natsume Sōseki (夏目 漱石, 1867 – 1916) is considered to be one of Japan's greatest writers. He studied at what was the Tokyo Imperial University and became Japan's first official English Literature scholar, spending two unhappy years resident in England circa 1900-2. Eventually Sōseki became a professor of English literature at Tokyo Imperial University. It would appear however, that no earlier English translation of Sanshirō was made before Jay Rubin's 2009 translation, perhaps due to negative historical/cultural reasons.

In Sōseki's semi-autobiographical coming-of-age novel, Sanshirō is a naive and dreaming student who discovers his rural upbringing to be a disadvantage in the metropolitan city of Tokyo. The early twentieth century witnessed a period of rapid industrialisation and adoption of Western ways in Japan. A photo dated circa 1905 (top) gives some indication of how rapid the industrialisation of Japan was, resulting in a certain amount of psychic dissonance, as indicated in the above photo, with both traditional costume and  modern electrification visible.

Sanshirō's class-mate Yojirō expresses the excitement of modern Tokyo when he exclaims to him - 'Get on the streetcar and ride around Tokyo ten or fifteen times. After a while it'll just happen -you'll become satisfied'.

In what is a narrative of gentle awakening in matters of romance, sex and learning, Sir Thomas Browne's Hydriotaphia plays a small part in Sōseki's novel. It is the enigmatic scholar Professor Hiroto who makes psychological observations such as - 'Look at England. Egotism and altruism have been in perfect balance there for centuries. That's why she doesn't move. That's why she doesn't progress. The English are a pitiful lot - they have no Ibsen, no Nietzsche. They're  all puffed up like that, but look at them from the outside and you can see them hardening, turning into fossils'.

Professor Hiroto lends Sanshirō an edition of Hydriotaphia (Urn-Burial). Browne's philosophical discourse assists the youthful’s protagonist’s intellectual development, for during his meditation upon it, he witnesses a child’s funeral. The combination of Browne's stoical prose and child's funeral awakens in the dreaming student an acute awareness of his own mortality. Here's the full, relevant text, including a passage in which Browne's literary voice is likened to the lingering reverberation of a giant temple bell sounding faintly throughout the centuries, a particularly original homage.


'He read the concluding paragraph of Hydriotaphia as he ambled down the street toward Hakusan. According to Professor Hirota, this writer was a famous stylist, and this essay the best example of his style. ‘That’s not my opinion, of course,’ he had laughingly confided. And in fact Sanshirō could not see what was so remarkable about this style, The phrasing was bad, the diction outlandish, the flow of words sluggish. It gave him the feeling of looking at some old temple. In terms of walking distance, it had taken him three or four blocks to read, and still he was not very clear about what it said'.

'What he had gained from the paragraph wore a patina of age, as if someone had rung the bell of the Great Buddha in Nara and the lingering reverberation had faintly reached his ears in Tokyo. Rather than the meaning of the passage itself, Sanshirō took pleasure in the shadow of sentiment that crept over the meaning. He had never thought keenly about death; his youthful blood was still too warm for that. A fire leapt before his eyes so gigantic that it could singe his brows, and this feeling was his true self.........'

'As he glanced in through the gate, Sanshirō twice muttered the word hydriotaphia. Of all the foreign words he had learned thus far, hydriotaphia was one of the longest and hardest. He still did not know what it meant...... Just to learn hydriotaphia was a time-consuming effort, and saying it twice caused one’s pace to slacken. It sounded like a word the ancients had devised for Professor Hirota’s personal use'.

Although Browne wrote on almost every topic under the sun,  little on the Land of the Rising Sun (Nippon) can be found in his writings, other than  mention of the Northeast passage to China and Japan, via the Arctic circle (Miscellaneous Tract 12). Browne's relative silence on Japan is reflective of Japanese insularity from Western missionaries, traders and explorers during his era.

A final connection between Japan and Sir Thomas Browne remains. One of the very first installations by the site specific installation artist Tatzu Nishi (西野達) (born 1960 Nagoya, Japan) was at the Art East International at Norwich in 1998. Using scaffolding, cladding, wood, and furniture, Nishi constructed a 'living-room' around Henry Pegram's 1905 statue of Thomas Browne, effectively allowing the Norwich philosopher-physician a brief respite from the season's weather to rest and philosophize indoors for a short while. 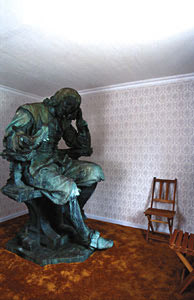