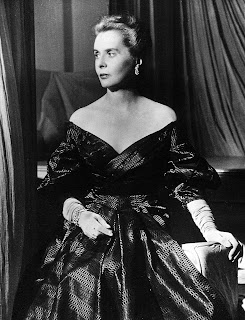 The dancer, director, teacher and choreographer Dame Ninette De Valois (born June 6th 1898, died 2001 aged 102) had many honours bestowed upon her in her lifetime including a C.B.E. in 1947, Chevalier de la Legion d'Honneur (1950), D.B.E.(1951), C.H. (1981) and O.M. (1992). But perhaps it is her being awarded the Erasmus Prize in 1974 for a contribution of particular importance to Europe in the cultural or social sphere which best reflects her greatest achievement. She effectively established a British National ballet company, (The Royal Ballet), as well as founding a national ballet company for Ireland and Turkey. The deep influence which de Valois exerted upon the ballet world continues to the present-day.

Ninette de Valois first danced professionally on the stage of the Palladium in 1915 and by 1919 she had achieved the status of premiere danseuse at the Royal Opera, Covent Garden, London.

In her memoirs de Valois states that she studied for 4 years with the Italian dancer Enrico Cecchetti (1850-1925). Born in 1850 in the dressing room of the Apollo Theatre in Tordino, Italy, by 1888 Cecchetti was widely acknowledged  as the greatest male ballet virtuoso in the world. He created and performed the virtuoso role of the Blue Bird and the mime role of Carabosse in the premiere of Marius Petipa's The Sleeping Beauty in 1890. Later in life he restaged many ballets, including Petipa's definitive version of Coppélia in 1894, from which nearly all modern versions of the work are based. Indeed, de Valois' own choreography for the Royal Ballet's revival of Coppelia in 1954 is based upon Cecchetti's choreography. [1]

In addition to Cecchetti, de Valois was greatly influenced by the Russian impresario Sergei Diaghilev (1872-1929). De Valois considered Diaghilev's Ballet Russe company to be the most perfect ballet expression the theatre has ever known and Diaghilev himself to be an exemplary fusion  of  connoisseur, creative artist and scholar.

It was during de Valois' time with the Ballet Russe that Diaghilev assigned to Bronislava Nijinska the choreography of Stravinsky's Les Noces. The result combines elements of her brother's choreography for The Rite of Spring with traditional aspects of ballet, such as dancing en pointe. The following year Nijinska choreographed three new works for the company: Les biches, Les Fâcheux and Le train bleu. While attending rehearsals of Les Noces de Valois noted- 'From  this detailed study was to emerge a clear picture of the geometrical beauty of the inner structure and relationship between the music and choreography'. [2]

De Valois had the unique opportunity to learn many aspects of staging a ballet production while with the Ballet Russe. Artists of the calibre such as Picasso, Stravinsky and Matisse frequently visited the Company in rehearsal. She describes one surprise visitor during rehearsals, none other than Vaslav Nijinsky who had been diagnosed with schizophrenia in 1919 and committed to a mental asylum. She describes him thus - 'Looking around that company where futures and pasts were stamped on features and actions, one felt the silent onlooker's present state spelt a peace that might be absent for ever from the understanding of his companions. It is important to stress the happiness that was in his face; it was as if the mind had departed in an effort to escape from the discord'. [3] 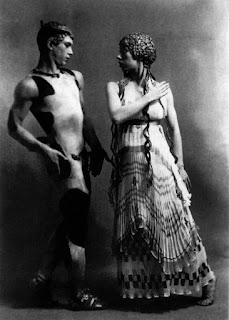 In her Invitation to the Ballet (1937) Ninette de Valois informs her reader that, 'two English choreographers have served under Madame Nijinska, both in the classroom and on stage, i.e. Frederick Ashton and the present writer - the latter regarding Nijinska's tuition as the most vital influence and help in her career'. Elsewhere she states - 'I learnt far more from Nijinska than I ever did from Massine'. [4] She also states- 'The main effect of Diaghilev on my dormant creative mind was to arouse an intense interest in the ballet in relation to the theatre....I had come to one conclusion: the same should happen along the same lines, and with such an ultimate goal - in England'. [5]

Upon leaving Diaghilev's company in 1926, De Valois occasionally toured England, in particular performing at Cambridge Arts Theatre and the Abbey Theatre, Dublin. In her Rout staged privately with her pupils at Cambridge in 1928, the influence of Bronislava Nijinska's Les Noches which de Valois had  danced while a member of Diaghilev's Ballet Russe  can be seen.

Ninette de Valois performed at the Maddermarket Theatre, Norwich on  Monday 1st December 1930. The Maddermarket Theatre was the first permanent recreation of an Elizabethan Theatre in England. It opened under the directorship of its founder Nugent Monck in 1921 and continues to be active today.

In what appears to have been a full programme of dance, all of which was choreographed by de Valois, her small troupe of dancers performed the following - Prelude Orientale with music by Gliere, Rhythm a group dance with music by Beethoven, Russe Fantasie a group dance, Serenade a solo with music by Boccherini, Etude a pas de trio with music by Debussy, Fugue,  a group dance to the music of J.S. Bach's Fugue no. 5 from The Well-Tempered Klavier and The Tryst with specially commissioned music by the budding composer William Alwyn (1905-85). It was probably de Valois' solo dance in A Daughter of Eve which was the star performance of the night with de Valois dancing in a costume  consisting of a fluffy, white, calf-length skirt, a peasant apron, and a bonnet with coloured ribbons.

'This became an immensely popular item, a demi-caractere miniature of a flirtatious young woman in silent dialogue with an unseen young man. At the end she offers him an apple, is refused, and then sits on the forestage steps, and bites into the apple. With a provocative smile, she leaves it on stage and walks away'  [6]

Its not improbable, given the fact that both Nugent Monck and de Valois were friends of the Irish poet W.B. Yeats, that somehow a commendation, request or invitation to perform at the Maddermarket theatre at Norwich was made between these artists. In the same year as her Norwich performance de Valois danced in a production of the opera Carmen  at Covent Garden  in 1930. 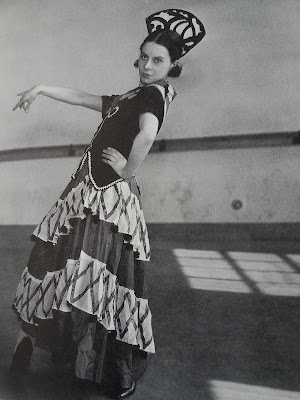 In 1931 De Valois, through the help of theatre manager Lilian Baylis (1874-1937) established a permanent ballet company at Sadler's Wells. At first the Vic-Wells ballet had only six female dancers, with Ninette de Valois herself as lead dancer and choreographer. The company performed its first full ballet production on 5 May 1931 at the Old Vic, with Anton Dolin as guest star. Its first performance at Sadler’s Wells was a few days later, on 15 May 1931.

De Valois shares this amusing anecdote about her benefactress Lilian Baylis- 'The body beautiful was her great topic; on this point she had no inhibitions. I once stood with her at the back of the Old Vic circle during a ballet performance when she informed me, in clear loud tones, that a certain male dancer had a most beautiful behind'.  [7]

De Valois performed one last time as a dancer in 1935 in a production of Coppelia.  One critic noted-

'Her performance was characterised by superlative neatness and elegance but it was in her miming that she particularly excelled. In the second act especially she reflected to perfection every idea and fancy passing through the heroine's brain. Not only her face but all the movements of her body seemed to be called into play'.

Another ballet-critic claimed she was- 'something of a sensation as Swanilda. Her grace and charm; her precision and sense of rhythm; and her gaiety and perfect miming, went to the creation of a very fine performance.'

Under the Directorship of Ninette de Valois the Vic-Wells ballet company flourished during the 1930s to became one of the first Western dance companies to stage the classical ballet repertoire of the Imperial Russian Ballet. De Valois began to establish a British repertory, engaging Frederick Ashton as Principal Choreographer and Constant Lambert as Musical Director in 1935 and  choreographed several of her own ballets including Job (1931), The Rake’s Progress (1935) and Checkmate (1937).

Eventually the dance company which de Valois established included many of the most famous ballet dancers in the world, including Margot Fonteyn, Robert Helpmann, Moira Shearer, Beryl Grey, and Michael Somes. In 1949 the Sadler Wells Ballet was a sensation when they toured the United States with Margot Fonteyn instantly becoming an international celebrity.

In many ways de Valois' visionary genius lay in her ability to recognise, encourage, train and retain talent. Self-sacrificing for the benefit of the Company, forever considering the future, she was also a strict disciplinarian who earned the nickname of 'the Games mistress' by pupils and dancers. Set designer and artist Leslie Hurry (1909-78) typifies her influence, stating-

'She imposed a stern discipline upon my turbulent imagination. An incredibly brilliant woman -sympathetic, understanding, marvellous to work with'. [8]

Although she officially stepped-down as Director of The Royal Ballet in 1963, de Valois continued to teach and exert her sometimes formidable influence upon the Company for a further decade. De Valois herself stated of  choreography-

'Choreography is one of the most complex and exacting forms of creative work, demanding an abstraction and plasticity to be found in painting and sculpture. In this way its relation to space is coupled with its own function in time'.