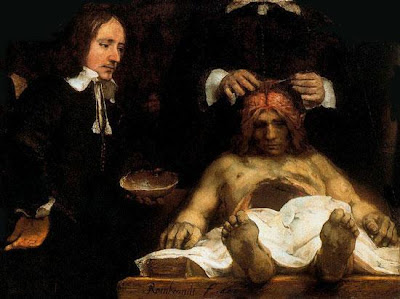 Anatomy lesson of Dr.Dreyman by Rembrandt


In addition to having an interest in the Bible for artistic inspiration ,Rembrandt (1606-1669) was also interested in the latest advances in medicine and anatomy. One of the biggest obstacles to anatomy and dissection came from religious scruples of the Church. Only the more progressive Universities in Europe in the seventeenth century could encourage the study of anatomy. Leiden University in Holland was in the vanguard of such scientific studies; One contemporary medical student to Rembrandt was the Englishman Sir Thomas Browne.

Its interesting that the American scholar J.S.Finch way back in 1950 speculated upon whether Browne was the sitter for Rembrandt's early work, 'The anatomy lesson of Doctor Dreyman'. Certainly the dates of Browne's Leiden sojourn tally and its recorded somewhere that he owned popular prints by both Rembrandt and Peter Paul Rubens later in life. Anyway, here it is, you can doubt it or believe it, you decide!

I just can't resist quoting Browne's great line upon his visual aesthetic appreciation- I can looke a whole day with delight upon a handsome picture, though it be but of an Horse'.
R.M. 2:9

Im going to post a couple of Dutch paintings Browne could have viewed when visiting the Paston's at Oxnead Hall and the Bacon's at Gillingham Hall soon.

It was in Rembrandt and Browne's time that Religion and Science began their divorce. Today the claims of Science and Religion are often seen to be in opposition to each other. The harmonious relationship between Science and Religion is however a major theme of Browne's spiritual testament Religio Medici. However even in the seventeenth century the great age of Faith, the first cracks in the edifice of faith appear in the confession in Religio Medici -

There is, as in Philosophy, so too in Divinity, sturdy doubts, and boisterous objections, wherewith the unhappiness of our knowledge too nearly acquainteth us. More of these no man hath known than my self, which I confess I conquered, not in a martial position, but on my knees. R.M.1:19