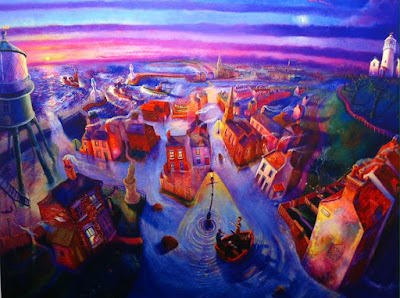 The absurdly slow and long bus-journey from Norwich to the coastal town of Southwold through the darkest interior of Suffolk, was well worth enduring for an early viewing of Mark Burrell’s latest work, currently exhibited at CraftCo, until the 28th September.

Mark Burrell (b. 1957 Lowestoft) is an established artist who has developed his distinctive style and unique vision from decades of industrious creativity. Nationally, Burrell’s work has featured frequently on British TV. He was awarded first prize on the programme Moving Art and won the Lucy Memorial Prize at the Royal Overseas League. Internationally, he has exhibited at the Interart Gallery and the Williamsburg historical Art Centre at New York.

Choosing to work in alkyd resins, giving his canvases a stained-glass luminescence and sometimes restricting his tonal palette in order to create a highly-charged emotional atmosphere, Burrell’s art is strongly feeling orientated. His often dark, near Gothic and sometimes disturbing art is however, not without great beauty and charm also, as is evident in his Memories of a Merry-Go-Round (below). 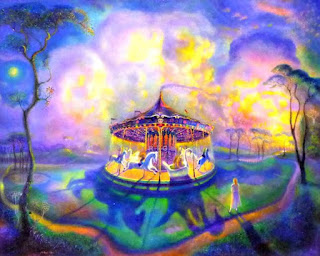 Burrell’s resourcefulness is such that the closely-knit community of his home-town of Lowestoft has supplied him with an abundance of artistic inspiration.His personal memories of growing up at the now long-gone Beach village, of a Lowestoft town long gone in particular, have provided him with fertile subject-matter. His artistic imagination sometimes draws upon common and personal childhood fears of a ghosts-on-the-washing-line-in-the--moonlight variety such as the Freudian terror of being told one's mother is, 'going to visit the Fish-man' (fish-shop) for example. Childhood memories and fears are prominent in his Bogey Boys. 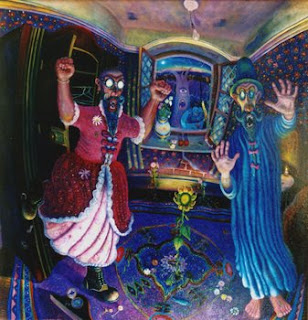 Burrell's extensive back-catalogue also includes a number of  both land and seascapes. In his Lowestoft Floods 1953 (top) Burrell conjures the events of the North Sea Flood at Lowestoft. Taking a bird-eye perspective of the cataclysmic surge tide, local landmarks are featured, along with the chaos of the event. There's perhaps a nod in style in Burrell's canvas to the primitive simplicity of English art as exemplified by Stanley Spencer (1891-1959) (it was while alone in the winter of 1937, when resident in Southwold, Suffolk, that Stanley Spencer begin a series of paintings entitled The Beatitudes of Love). What's certain is that it's a work of considerable artistic imagination for Burrell was not actually born until several years after the event; however, local folk-lore recollection of the disaster in conjunction with Burrell's fertile artistic imagination and distinctive draughtsmanship, contribute to a highly-imaginative reconstruction of the effects of the 1953 North Sea storm tide upon  the east coast town of Lowestoft.

Far from viewing the world through rose-tinted spectacles, Burrell considers the world today to be a sometimes dark place. Sharing this view-point with the German artist Otto Dix (1891-1961) whom he admires, the influence of the Neue Sachlicheit (New Objectivity) artist can be discerned in his Midnight Circus, Backstage (below). 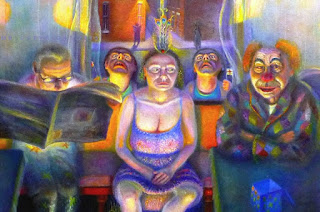 Mark Burrell, along with fellow North Sea Magical Realist artist, Peter Rodulfo, is also receptive to the ideas of C.G.Jung (1875-1961). In particular the Swiss psychologist's essays The Spirit of Man, Art and Literature, in which the psychic processes and archetypal structures involved in artistic creativity are discussed. Jung's essays, especially On Picasso (1932), Burrell considers to contain the most perceptive of all psychological observations upon artistic creativity he's ever read.

With words applicable to both Burrell's and Rodulfo's art, C.G. Jung declares in The Spirit of Man, Art and Literature, -

'Whoever speaks in primordial images speaks with a thousand voices; he enthrals and overpowers, while at the same time he lifts the idea he is seeking to express out of the occasional and the transitory into the realm of the ever-enduring'.

and 'All art intuitively apprehends coming changes in the collective unconsciousness'.

Its no sweeping hyperbole to state that Mark Burrell is quite simply the greatest creative artist to flourish from the coastal-town of Lowestoft since the days of the composer Benjamin Britten (1913-76). He's also of a calm, thoughtful and affable disposition in his personality. We therefore cordially wish him along with fellow North Sea Magical Realist artist Peter Rodulfo, many more years of good health and inspiration. 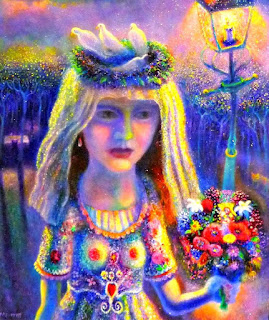 There's a distinctly Mark Chagall-like quality to the beautiful painting entitled Sky of Stars (above); however reproductions barely do justice to the glowing splendour of Burrell's work. Nevertheless they're worth posting, if only to inspire the reader to visit a current exhibition and view the far greater originals for themselves !

A film about Mark Burrell

Peter Rodulfo: As the elephant laughed