Mark Burrell's 'The Homing Ground' - All aboard the British transcendent locomotion. 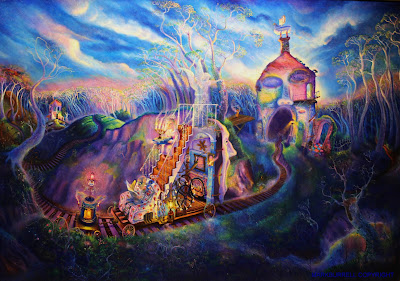 Mark Burrell’s painting The Homing Ground sees the artist giving full expression to his technical and draughtsmanship skills, at a peak in imagination, and delighting in 'home-grown’ imagery which fairly crackles with cognitive dissonances.

Painted in 1993, when the artist sometimes devoted 3 or 4 months to complete a single canvas, often in painstaking detail, its inspiration was sparked when Burrell, while travelling on a train returning to Lowestoft, read a magazine article on the world’s oldest clock. However, not unlike when Dorothy realizes she's no longer in Kansas City, we're far, far away from Lowestoft when viewing this dream-like landscape.

Measuring 36 x 25 inches and painted on board in the artist’s favoured medium of alkyd resin oils, The Homing Ground features a landscape in which a bizarre train consisting mostly of a staircase and wall trundles along a railway-track. At the bottom of the staircase an elderly gentleman sits in an arm-chair reading a newspaper. An androgynous-looking youth holding a candelabra sits half-way upstairs. An angel stands at the very top of the staircase. At the helm of this peculiar house or rail-carriage without either windows or roof, there’s a disproportionately large face contoured like a mask. On the left in the background there can be seen a landscape which has a junction, hinting of a landscape networked in rail-track. In the distant background a boy can be seen running towards, not from, a spooky-looking house.

The background to The Homing Ground is fringed by a dark, wild woods, creating a tension by alluding to hidden, unknown contents. As often in Burrell's art, the sky is wholly alive and dramatically lit. Together sky and background provide a magical backdrop for the viewer to focus upon the main action. Meanwhile the passengers of Burrell's transcendent locomotion chug along oblivious to their oncoming destination, a quite literally, yawning tunnel. 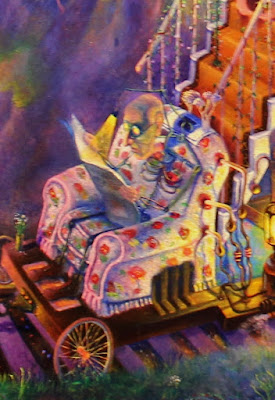 Burrell’s art encourages the viewer to look closely and look again. Its always best to see his paintings in the original and if given half the chance to do so, grab it ! Digital photography cannot be relied upon to faithfully reproduce the richness of an oil-painting in either detail, colouration or dimension. For example, it is only when attentive that one notices the gentleman sitting in an arm-chair reading a newspaper consists only of a head, and is body-less, seemingly sustained by various tubes feeding his skeletal frame.

Interpretations are numerous, and ought to be always taken in a 'soft and flexible’ manner, without dogmatic insistence. Burrell’s gent who is sustained by tubes and wires could allude to either modern-day's relationship to medical science or prophetic of the close attachment millions now have to the computer network in their everyday lives.

Another interesting association occurs in the depiction of a stair-case in The Homing-Ground. Like railway tracks, stairs are a construct which assist in transporting people to another space and dimension. One is encouraged in such an interpretation upon seeing at the top of Burrell's 'stairway to heaven' an angel who adds a spiritual mood to the scene. Ethereal and translucent she stands at the helm of Burrell’s transcendent locomotion sprinkling cut roses upon the track. Her presence reminds the viewer that every-day life is not always centred upon the material, or even always visible to the senses, and though often unacknowledged or denied, may include an unknown quantity of spiritual protection. 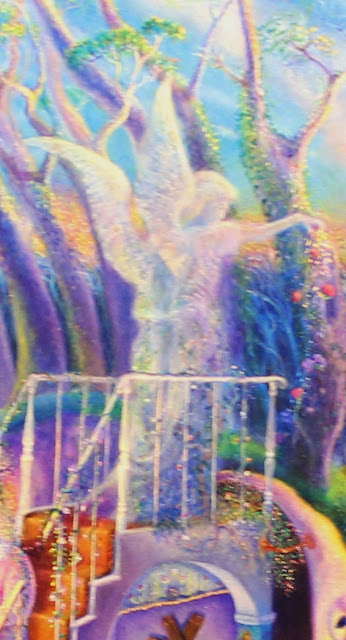 The rail-track, along with its more archaic variants, the road and the river, may be viewed as a symbol of  life's journey and of Time, a prominent theme in The Homing-Ground.

One of the most frequently encountered of all artistic 'double symbols' in Renaissance and esoteric art used to symbolize Time occurs in representations of Youth and Aged. Technically known as Puer et Senex they are evident here in the form of a bald, and therefore presumably old man reading a newspaper, and a youthful character sitting on stairs wistfully holding a candelabra.

Time-wise historically, the steam-engine and railway were important British technological inventions of the 19th century, and key components of the Industrial Revolution. By 1850 there was a network of over 7000 miles of rail-track covering the length and breath of England. The steam locomotion, along with rail-track, transformed every British town, city and village. Indeed, for those living at North Sea coastal towns such as Lowestoft, before the train, it was quicker and often more comfortable to travel via sea to English coastal towns or continental, main-land Europe than to London. The arrival of the railway in the mid-nineteenth century changed livelihoods too. It enabled the produce of fishing-towns to be transported swiftly to London and other urban centres. Fishing-towns such as Great Yarmouth and Lowestoft also became accessible destinations for holidays, health tourism and entertainment by a growing urban population with leisure-time.

The British love-affair with trains in the past and today can be seen in the popularity of Hornby model trains and children's animated characters such as Ivor the Engine and Thomas the Tank.

A fine example of Burrell's eye for exquisite detail and colouration can be seen in the tail-light of his transcendent locomotion. This extraordinary detail could almost stand alone and framed as a single work or art, being near Vermeer-like in its realization of light and detail.

In an art-work delighting in cognitive dissonances, that is imagery which provokes unease and ambiguity through conjoined and improbable objects which never the less seemingly exist; the background of The Homing-Ground features a house which has a human face superimposed upon it and whose yawning mouth is also a tunnel. A bath with a sail is perched upon its chimney-top. The image is arresting, humorous and disturbing and also a superb example of the artist’s ability to create highly-original 'home-grown' imagery which induces cognitive dissonance. Such paradoxical and thought-provoking imagery is a hallmark of Burrell’s imaginative art. 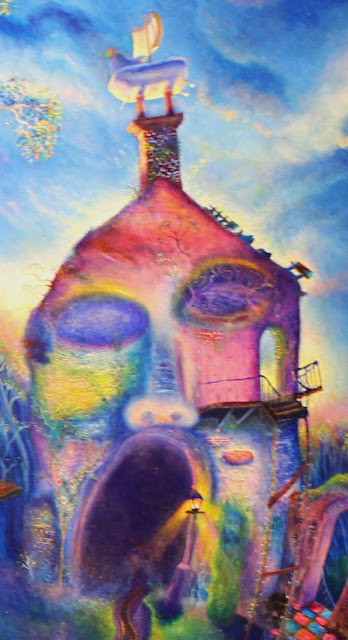 As a symbol the tunnel has a number of  meanings. As a portal to the unknown it alludes to humanity’s deepest fear, namely death, but  also to transformation and change, as well as the narrow anatomical passage-way to birth. Tunnels are also a feature of sea-side fun-fairs including the Tunnel of Love and the Ghost-train, as well as the roller-coaster.

Another example of cognitive dissonance occurs in the form of the home. The home is the one stable point in most lives. Nomadic life-styles apart it is usually a static location, providing stability in our daily comings and goings in the world around us, yet here it is seen, caravan-like, in motion and yet still seemingly in some kind of domestic tranquillity.

Incidentally, I cannot resist mention in a moment of roller-coaster association, of the historical figure of Sir Thomas Browne (1605-82) who was recently elected as honorary 'Great Grandfather’ of the art-movement known as North Sea Magical Realism, of which Mark Burrell is a leading member..

Thomas Browne not only introduced the words ‘locomotion’ and ‘network’ (as an artificial concept) into the English language, but also believed in the existence of angels [1]. Holding such seemingly contrary beliefs, namely scientific and religious, appears incompatible to modern-day sensibilities, but in Browne’s era it was possible to possess both an imaginative scientific mind which anticipated ‘locomotion’, as well as believing in the existence of angels. And in fact there’s no small similarity in the fantasy imagery of Burrell’s The Homing-Ground to an illustration originating in Sir Thomas Browne’s era.

In an frontispiece illustration to a German 1618 manifesto believed to be by the elusive Rosicrucian fraternity, there can be seen another form of improbable transport  inducing a cognitive dissonance upon the viewer. A castle on wheels. Its improbability is heightened by two disproportionately large objects, a sword wielded by a giant arm, and an over-sized trumpet. Both Burrell's art and Theophilus Schweighardt's illustration are the products of deeply original imaginative minds. [2] 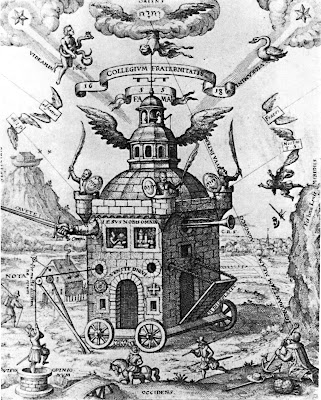 Long resident at England’s most easterly town, Lowestoft, there’s something quintessentially British about Burrell’s art, in humour, as well as its Spencer-like draughtsmanship and portraiture. Burrell himself berates those who mistakenly describe his favourite artist Stanley Spencer (1891-1959) as a parochial, Little Englander figure, (in all probability from a lack of familiarity with one of 20th century Britain's greatest painters) while totally misjudging the artistic stature of one who was ‘an outstanding draughtsman’ in Burrell’s view, amongst other accomplishments of Spencer’s art. [3]

Like Stanley Spencer, Burrell is an artist who does not shy from travelling less-travelled, often darker paths in his artistic observations upon human nature. This uncompromising ability to examine less-pleasant aspects of human nature can initially produce an uncomfortable viewing experience; and it is only when one acknowledges that life is not always sweetness and light, and that there remain taboo aspects of the human psyche that one begins to appreciate Burrell’s artistic integrity as he unflinchingly tackles the subject-matter of his art.

In many ways Burrell’s humorous yet perplexing painting, which is not without a philosophical element, may be considered as having a kinship to imaginative worlds similar to those of Lewis Carroll’s Through the Looking-Glass or those portrayed in the pythonesque animation of Terry Gilliam (b. 1940). Indeed, after seeing the film The Imaginarium of Doctor Parnasssus’ (2010) Burrell lauded Gilliam’s fantasy as ‘mesmerising’.

In summary, Burrell’s The Homing-Ground has a number of themes, these include Time and the human condition, childhood innocence and the sacred, along with death and the unknown. These are all enhanced and heightened in emotional intensity through the artist’s distinctive mood-inducing tonal palette, most often involving a palette somewhat reminiscent of the dark and vivid tones of a Gothic stained-glass window, but uniquely Burrell's.

Painted over twenty years ago, The Homing-Ground may be viewed as a coming-of-age art-work, marking the artist's early maturity as he explores and successfully develops, a personal artistic language in style, home-grown symbolism and thematic concerns. Burrell continues to develop further. The Homing-Ground remains a significant work in a fascinating and expansive portfolio.

[1] Part 1 paragraph 33 of Religio Medici has a whole paragraph discussing Angels. It includes a footnote which states- Thereby is meant our good angel appointed us from our nativity.’

Mark Burrell discusses his artistic development in a video.