As the Elephant Laughed - An evening with Peter Rodulfo 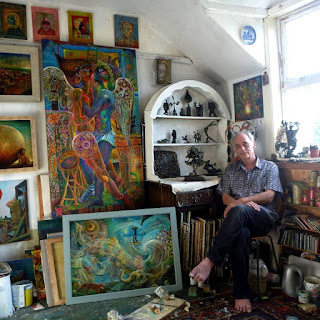 Recently I had the pleasure of an evening with the artist Peter Rodulfo. Modest and soft-spoken, Rodulfo is a gifted, prolific and visionary painter who is equally adept in portraiture as in fantasy as in landscape. His paintings are by turns graphic, witty and mystical.

While in conversation with the artist, over a bottle or two of wine, and in between reminiscing about 1970's  the setting of our youth, and while listening to recent songs by Lou Reed and Kevin Ayers, Rodulfo insists there's a strong element of the charlatan within most artists. The public these days, he states, demand a constant pulling-rabbits-out-of-a-hat conjuring act from artist's and are required to provide ready-made meanings and answers to all of life's questions. Some artists, more than others are willing to fulfil this role of conjurer, often compromising their artistic integrity with financial reward. Rodulfo's’s art however speaks strongly of independent creativity. He is indebted to nothing other than the combustive energy of his own industriousness and imagination.

There’s more than a little of the rebellious and eccentric about Rodulfo who exhibits archetypal Aquarian characteristics in his personality and art. Reticent and even downright self-depreciating at times, a casual glance at his book-case reveals favourite authors such as Honore de Balzac, who was no mean occultist and physiognomist, and the autobiography Memories, Dreams, Reflections by the seminal psychologist C.G.Jung. Almost all the available wall space at his home is given to a kaleidoscopic gallery of his art, recent work and older personal favourites are all mixed together - Tolkienesque landscapes, animated portraiture of sharply-observed character and dream-like imagery jostle for the viewer's attention. Such a cornucopia of paintings gives a strong impression of a life-time's productivity and testimony to an industrious and disciplined creativity.

Although he’s travelled the globe, it’s the city of which Peter Rodulfo has chosen as home for decades. Here in an ancient, almost forgotten corner of the English psyche, the mysterious east of ,  life moves at a Do Different pace. Many artists have appreciated s relative calm; its been the home to gifted artists throughout the centuries, from the days of medieval stained-glass designers to nineteenth century 'Norwich School' artists, John Crome, John Sell Cotman and Joseph Stannard, who celebrated Norfolk’s ‘bootiful’ landscape. Norwich has often quietly nurtured creative artists with it’s relatively stress-free urban living. The city is encircled by an expansive, yet intimate landscape; a not quite flat, but undulating rural county; which makes the city geographically remote and not easily accessible, to the delight and consternation of its inhabitants.

It’s easy for Rodulfo to give a nod to the art of Paul Klee, Max Ernst and De Chirico for example, while remaining very much his own man. Although his art utilizes some of the techniques and motifs associated with surrealism, as well as magical realism, he retains his artistic integrity. Labels are often misguiding and Rodulfo wisely eschews any eager and simplistic labelling of his still evolving creativity. But although comparisons can be misleading, there is one British artist whose art is worthy of note in both technique and imagination to Rodulfo's - that of the self-exiled British surrealist artist Leonora Carrington (1917-2011). Like Carrington, Rodolfo acknowledges the role the unconscious psyche plays in his creativity. Like Carrington, Rodulfo's symbolism is home-grown and capable of striking a deep chord in its unconscious association. Finally, like Carrington, Rodulfo is equally adept at draughting a layered field of perspective to showcase his artistic vision. His paintings, like the best surrealist or magical realist painters can be a vivid encounter with the unconscious psyche, or more correctly in Rodulfo's case, a polite enquiry into the viewer's relationship to their own unconscious psyche. 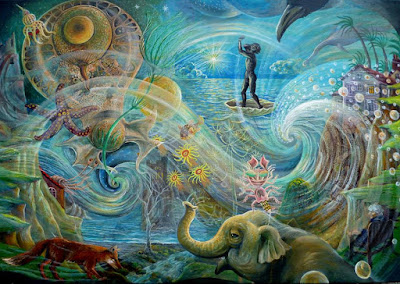 Rodulfo's canvas As the Elephant laughed (above) exhibits a rich vocabulary of symbolism evoking a panorama of life on earth. The relentless march of time is depicted by the eroding cliffs of the Norfolk coast framing the composition. Its detailed brushwork includes stars and the ocean, perhaps the most common of all symbols of the unconscious psyche. Protozoan marine-life, animals and ageing humans are also depicted in a skilfully layered composition evoking the cosmic nature of time. It's a canvas lush in colouration which instantly transports the viewer to internal landscapes of the imagination where as in much of Peter Rodulfo's art, imagery, technique and imagination coagulate to form an absorbing viewing experience.

Through decades of hard work Rodulfo has now become a grand-master of magical realism; his creativity has yet to reach its zenith. One cordially wishes the artist will enjoy many years more of painting to the delight of his growing number of admirers.

In January 2012 Peter Rodulfo released no less than twelve photographic images of new paintings to public view. I've chosen just two of his paintings from a total of over 60 in his facebook portfolio for 2011/12  alone. With such a varied and expansive back-catalogue and with many paintings quite different in subject-matter, but equal in terms of technical virtuosity, its well worth checking out more of Rodulfo's art-work. 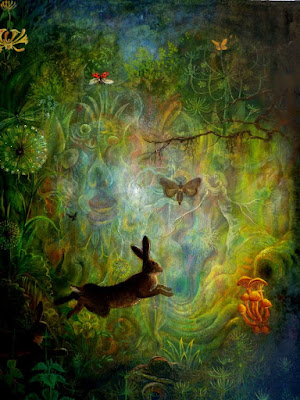 An Intruder in the Forest by Rodulfo.

As the elephant laughed - A panorama of evolution